Bronies, like any sufficiently creepy internet subculture, have their own vocabulary which to the outside observer may seem to be so much autistic hooting and howling. Fear not, loyal reader! Here is a glossary of some commonly used terms to keep in mind for the rest of this article. Reminder: grown-ass men use these to describe their pedo-tastic fixation on a cartoon show meant for young girls. 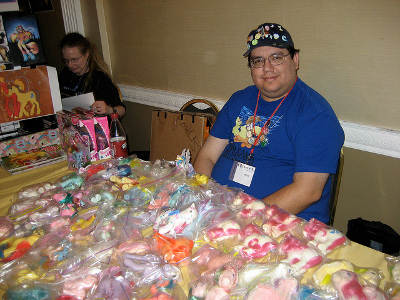 Anypony (pronoun) Also: "Everypony", "Nopony", "Somepony", etc.
Brony for "Anybody"; replace the word "body" in any pronoun for a similar effect. Because they like to pretend they're pastel-colored horses or some shit.
"Anypony want to watch me clop on webcam?"

Baked Bads (noun)
Muffins made from non-muffin ingredients including potato chips, Mountain Dew and other nerd staples. Apparently used in the show at some point, but colloquially used by bronies to describe their disgusting eating habits.
"I'm going to go buy some more baked bads because I wore myself out clopping."

Brony (noun)
Slang for "autistic manchild pedo/beastophile". The reason you're reading this stupid article.
"I am a brony and I love to clop."

Buck (verb)
Brony for "fuck". Can be used exactly like the real word.
"I would buck Applejack SO HARD if she were real, and I don't care who the buck knows it, but alas! I can only clop!"

Cutie Mark (noun)
Temporary/sometimes permanent tattoos that bronies put on their ass cheek to mimic their favorite cartoon horse.
"I got Fluttershy's Cutie Mark tattooed on my ass because she's my favorite pony to clop to."

Derpy (name)
A mentally impaired-looking background horse that bronies have latched on to due to their own autism/ass burgers.
"Dammit! Why did the PC Police have to make Derpy less retarded? She's way harder to clop to now!"

Facehoof (noun)
The act of putting one's face in one's palm out of exasperation. Only a hoof. Because horses. Get ready to do lots of facehoofing during this article.
"Can you believe these neighsayers calling us disgusting reprobates for clopping? *facehoof*"

Fencebucker (masculine noun) Also: "Fillyfooler" (feminine noun),
A bisexual/gay/non-heteronormative brony. Because there totally needed to be a horse-related term for this.
"I am a Fencebucker, so I only clop to Stallions!"

Filly (noun) Also: "Foal" (male child), "Mare" (adult female), "Stallion" (adult male)
Brony slang for "a female child". Used just as creepily as you'd imagine.
"I refuse to make a clopping joke about fillies. And buck you for expecting one."

Hay (noun) Also: "Horseapples" (bullshit, damn, general profanity), "Buck" (fuck), etc.
Cutesy term for "hell". Because a group that openly jacks off to cartoon ponies dare not be crass!
"If I keep clopping, I am going to go to Hay for sure! Oh well! What the hay! *continues clopping*"

Neighsayer (noun) Also "Parasprite" (internet troll).
Someone with the sense God gave a turnip that doesn't spend his life watching/clopping to My Little Pony; a "hater".
"Buck the Neighsayers! I'll clop all I want!"

Pegasister (noun)
A female My Little Pony fan, specifically one that is into the same general weirdness and perversion that bronies are, rather than the pre-teen variety that the show was aimed at.
"One day I hope to meet a curvy, aspergette Pegasister so I can finally stop clopping!"

Plot (noun)
The butt, ass, posterior, hindquarters, etc. of a cartoon pony. Often clopped to.
"Heh heh. Why do I watch My Little Pony? Why, for the 'plot', of course! *wink wink* *clops vigorously*"

Ponychan (internet location)
A wretched hive of scum and villainy. Abandon all hope, ye who enter.
"I love to clop to the pictures on Ponychan!"

Salt (noun)
Drugs. Because horses like salt, you see.
"The last time I clopped after doing some salt, I almost ripped my dick off!"

Wingboner (noun)
The act of becoming aroused; used by bronies who fancy themselves to be pegasi.
"I have a wicked wingboner right now. Time to clop!"