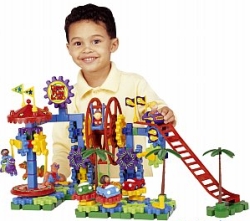 I tell this story in every one of these threads, but the last time I was in Disney World, some woman was trying to get her kid's picture with Minnie, but Minnie was about to leave and exchange places with another character (the line had been pre-informed that this was going to happen, I'm pretty sure). The people watching Minnie, "handlers" I guess they're called from previous threads, couldn't stop the woman in time, who was grabbing Minnie and trying to take a picture while doing it. She finally resorted to hitting the character to trying to keep her in place.

Completely in character, Minnie ran off, covering her big, fake Minnie eyes as if she were crying.

In other news, repeating this story over and over again on the forums have made me realize that I forget more details every time I tell it, and the part that sticks with me the most is that the person in the Minnie costume actually stayed in character while being harassed by a psychopath.

My experience was about 10 years ago at the Williamsburg Busch Gardens. The Scout troop I was in went there for one of our monthly camping trips. Two of the older guys (16 or 17) decided it would be funny to bring blood pellets on one of the roller coasters and bust them on their faces after leaving the station. Until they got off the ride and found two managers, three rent-a-cops, and a park medical unit at the end waiting for them. That was their first and last ride of the day. The only person more pissed off was the parent who had to drive them back to the campsite and stay there with them the rest of the day.

I went on a university bus to Six Flags on Halloween for this spooktacular celebration or whatever they wanted to call it. It was filled with junior high school kids who thought they were thugs. This was near Washington, DC so there were a shit ton of these kids...all of whom were likely 15 and under.

When our bus was waiting for university kids in the parking lot, I saw a fight break out between these two girls. They were wearing mini skirts and stripper shoes and stuff, right. One was ripping chunks of hair out of the other girl's head, beating her to a bloody pulp, and they were surrounded by lots of junior high thugs.

There were two cops sitting on the hood of their car, watching the whole thing and laughing.

At Universal Studios, I didn't want to go on a flume ride, as I hate being all soggy afterwards, so I just chilled out and sat around on the scooter my dad had rented, to make sure none of our stuff got taken. In that sitting, I saw a woman walking around in just a bra and shorts, with one nipple exposed, and she yelled at me when I politely pointed it out to her. And I also saw a child in a diaper run past, runny orange feces dripping down her leg, and piddling onto the ground. Last but not least, a hambeast double fisting two turkey legs, taking alternating bites out of them.

I was at Disney last month and saw something I absolutely could not believe. Right there in front of me was a family of four; father, mother, and two daughters who were certainly under the age of 9...all wearing matching black t shirts with a picture of a fetus on it with the epitaph "Thanks Mom for Choosing Life".

I absolutely could not believe it.

A few years back, I was at Enchanted Forest Water Safari in Old Forge, NY where I saw my failure of humanity. This place is mostly a water park and there's some pretty sweet rides. I was resting from a long day of running around when I heard this kid yelling that he was scared. I looked over and a little boy (not much over 8, I'd say) was surrounded by his mom and dad who were MOCKING HIM FOR BEING SCARED. Literally saying, "You're such a baby! Why are you such a wuss?!" Complete with pointing and laughing.

Some people should never have kids.

My friends, every ride must to come to an end at one point, and the Comedy Goldmine is no exception. I want to thank all of the forum goons who contributed by telling us stories to make us laugh at fat, disabled or foreign people. We should be thankful for the disgusting masses of humanity who pour through the gates of Disneyland, like butter through a fine sieve. Only by admiring their failures can we truly feel content with our own lives, and keep aspiring to be better than the guy in front of you in the line who's scratching his ass with a hand which will be holding a hot dog merely seconds later. Next week's Comedy Goldmine will come to you live from Cancun as we hit the beach and start our summer in style. Bring along your sunscreen, it's going to be a scorcher!