If you live in the land of purple mountains and fruited plains, you already know that the Super Bowl is tomorrow. Recent studies "prove" that more women are beaten on Super Bowl Sunday than any other day of the year, probably by the players on the losing team and Mike Tyson. But every day is a good day for Mike Tyson to bite n' rape, so I don't see how that would have much of an impact on the overall abused wife statistics. 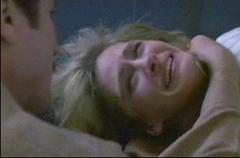 "Happy Super Bowl, honey, guess who won the coin toss? I choose to kickoff... YOUR FACE!"

You'd be surprised to learn that there isn't much information on the Super Bowl referees on the Internet. What are their hobbies? How about their turn-ons? Measurements? Referees are essential to the game and do more work than the cheerleaders, who are just frivolous window dressing with big teeth. So why aren't refs given at least an equal amount of attention? I don't think the fact that all referees are unattractive middle-aged to Roman-era men has anything to do with it. There must be some sort of conspiracy going on. And I'll get to the bottom of it by extensively interviewing cheerleaders.

Which brings us to the big question: who does the kid who saw dead people in "The Sixth Sense" think is going to win the Super Bowl? After all, if this kid can really see ghosts, he can no doubt predict the results of a football game by channeling the spirit of Dan Marino or Icky Woods or some other lifeless corpse. Come to think of it, if you want to know the answer to any question, your best bet is to ask a celebrity. They're smarter than all us average folk because they're on TV. They're like superheroes without the capes! Fortunately somebody has already done the dirty work for me and asked a variety of "famous" people which team they thought would win the big game. Here are the highlights:

HALEY JOEL OSMENT, actor: Patriots. They're far from favored, but sometimes if you are an extreme underdog that will make you play hard enough to win. 27-24. 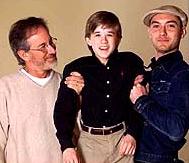 "Help me! I've being abused by some of the biggest names in Hollywood! Somebody please call social services and also I pick the Patriots to win the Super Bowl!"

And sometimes if you're an extremely underage boy you can sleep your way to the top of Hollywood's A-list just as fast as a grown woman can. Go back to being a little robot Pinocchio boy, Blip Blip Bleep Bloop Bloop.

When you're not feeling patriotic, do you whore yourself out to Al-Queda's accountants in exchange for Russian lipstick and Cuban cigars? Also, are you deaf and mute or just deaf? WORLD PEACE OUT!

RUSSELL JOHNSON, actor, The Professor on "Gilligan's Island": Well, both of my teams lost. I'm from Pennsylvania so I was looking for the Steelers and the Eagles. So I really don't give a damn. But the obvious favorite is St. Louis.

You don't give a damn? You don't give a damn?!? That is not what I'd consider an astute and carefully researched scientific conclusion, you vulgar van-de-well! Ignoring Mary-Ann's completely obvious sexual advances and failing to fix a six-inch hole in a boat was one thing, but allowing bias to taint your decision making process - a clear violation of the scientific method - is another. You're out of science, pal.

CARROT TOP, comedian: Patriots. The world has never been more "patriotic." The year of the upsets! Brady/Bledsoe & Co. in the snow under the dome will Ram it home for the "American" Football Conference. 27-24.

Dial down the center for the nearest rehab center, Carrot Top! What the hell are you talking about? "In the snow under the dome?" The Super Bowl is being held inside the Louisiana Superdome, not the Louisiana Snowglobe. You know, those stupid little things tourists and grandmother's buy? Snow globes? Filled with poison mercury and stuff? Regardless, please make like juice and grind yourself into a vitamin-enriched paste.

SCOTT ADAMS, cartoonist, "Dilbert": My issue with the Patriots is that New England isn't a city. They're so indecisive that they named the team after an entire region. That shows a lack of confidence that will result in punts on fourth and inches. St. Louis, on the other hand, decisively named their team after a type of computer memory. Those guys are smart. I predict that St. Louis will win by 40 points.

I HAVE 256 GIGS OF RAMS ARF ARF ARF. Here's the latest "Dilbert" strip, in case you missed it:

New England is a clam chowder, not a city! Better hope Kurt Warner doesn't eat you all up, because loves chunky soup! WHOA, SOUND THE COMEDY ALARM!

BARRY WILLIAMS, actor, Greg Brady on "The Brady Bunch": This one's easy. The Patriots because any team with a Brady has got to go the distance. We call (Tom) the fourth Brady. Not many people knew about him growing up because we kept him off camera. 34-28.

Bullshit. BULLSHIT, GREG! Look, I'm willing to believe you didn't fuck your step-mom or Marsha, but I detect a serious continuity error in this highly dubious claim. I will be reporting this to "The Brady Bunch" newsgroup post-haste, in accordance to the rules and regulations stated in the alt.fan.brady-bunch.timespace.continuum FAQ. You see, Patriots quarterback Tom Brady was born in 1977. Three years after "The Brady Bunch" went off the air and their Astroturf lawn was sold to the Montreal Expos. This, coupled by the fact that your dad was playing with the other team, proves that you're spinning a web of lies thicker than a spider with constipation. I don't appreciate your falsehoods one bit, Johnny Bravo.

LEEZA GIBBONS, TV host, "Extra": Being a sports neophyte, I usually root for the colors of the teams. You know, fashion/football -- it's pretty much all the same to me. So this year I'm going with the Patriots since it's so 'trend of the moment' to be in red, white and blue. Patriots: 36-24-36.

Oh, I get the joke. Instead of guessing the score, you recited your imaginary measurements! Here's a joke of similar quality: the only "extra" on your show is the "extra" amount of pork fat you slurp down with great gusto between takes! Get it? You're getting fatter!

STEVE VALENTINE, British actor, "Crossing Jordan": New England. Whilst I like anything with the word 'Ram' in it (it goes back to my childhood, don't ask!) I am an 'OLDE ENGLAND PATRIOT' so I feel a kinship. Of course it doesn't hurt that they kick bum. A tight game but the underdog gets the bone. 12-10.

Hey everybody, let's play, "count the number of homosexual innuendoes in this paragraph!" Everybody loses! Ram your bone into a tight bum back in Mother England, you tea-guzzling, castle-climbing prick.

JENNY JONES, talk show host: I'm betting on the Rams to win because, frankly, I thought they were still in L.A. Oh well, at least we still have the Raiders!

Yeah, at least we still have the Raiders! Oh wait, we don't, they moved to Oakland years ago to escape the gobs of smog flowing out of your gaping maw of a smashed-in face! Next on Jenny Jones, "talk show hosts out of touch with reality, and the transvestite fathers who molest them!"

LYNNE KOPLITZ, TV host of "Change of Heart": I'm going with the Patriots because I think Coach Belichick is going to have a 'change of heart' and start that sensitive quarterback, cute Drew, who got so emotional after the last game. But I think it will be a close one. My prediction -- 2 to 1!

Oooh! Clever plug for your show that nobody has ever heard of! Yes, the best players in football are whiney guys with weak chest cavities who cry after every game. Drew Bledsoe is such a great fellow for getting paid $10 million dollars a year to stand on the sideline holding a clipboard while a guy making close to the NFL minimum wage gets to have his ankles tramped upon by 300 pound men! What a role model! What a sweetheart!

Leonard "J." Crabs is Aaron Spelling's lawyer, so you know you can trust his Super Bowl predictions! He also created "Titans" and "Savannah!"

I hope Lynne Koplitz has a "change of heart" and swaps her heart with that of a baboon, because even banana-slurping primates know it's impossible for a football game to have a score of 2 to 1. That's a safety and an extra point, but you can only score an extra point after a touchdown. Perhaps Lynne got confused and was merely quoting the estimated number of people who watch her program.

AARON SPELLING, television producer: Rams, 20-10. I guarantee that one of the teams will win!

Boy, will you look dumb if there's a terrorist attack or an earthquake or the world explodes. I guarantee that your next TV series will feature at least two pretty females who can't act. And a scene where someone gets thrown into a pool.

SHARI HILLER, TV co-host of "Room by Room," HGTV: Definitely the Rams. Kurt Warner is very hot (in more ways than one, if you know what I mean). St. Louis itself is a very important city to me, and it brings back fond memories. I purchased my favorite living room sofa on a trip through St. Louis. So, there's another reason ... the city has great taste in furniture! 34-14.

No, actually, I don't know what you mean. Why is Kurt Warner hot? Does he have a fever? Is he wearing too many layers of sweaters? Look, come right out and say it lady, you're a lonely middle-aged woman and need a man - any man - to wind your biological clock and stick his head in and out of your sexual doorway while screaming "cuckoo, cuckoo!" every hour on the hour. Check under your favorite sofa cushions for spare change, Shari, because the only way you'll get that kind of treatment is by paying for it.

ACE ROSS, teen clothing designer and manufacturer: The Patriots will surprise everyone -- including themselves -- with a 24 to 21 win over the overconfident Rams.

You know somebody is famous when they have to write what they do next to their name. Ace is the place for bad Super Bowl predictions and pedophile-friendly tube tops. 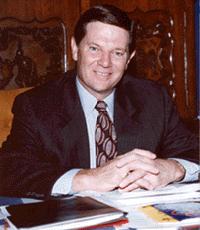 "Hello! My name's Tom Delay and I spend taxpayer dollars on strippers with no delay! And then get de-laid! Haha, just kidding, I only fuck interns."

Typical politician. Ask a question, get an answer that doesn't answer your goddamn question at all. To beat this joke into the ground, here is a short play entitled "Congressman Delay of Game":

Wife: How's the game going honey? Who's winning?
Tom Delay: The Super Bowl is on television.
Wife: Do you want anything to drink?
Tom Delay: We'll take your suggestion under due consideration. Go U.S.A.!
Wife: Well, I'll be in the kitchen if you need me. Let me know if there's any penalties because that one field judge umpire referee guy makes me wet.
Tom Delay: You stupid bitch!
(Tom Delay jumps from his chair and beats his wife with an anthrax-laced sack of mail)
Tom Delay: Statistics don't lie, slut! DON'T MESS WITH TEXAS!

Have a happy and safe Super Bowl Sunday! And to all you Patriots fans: if your team loses, it's no big deal. At least your favorite team didn't lose the Super Bowl four consecutive times. Like mine did. *sniff* WHY DID IT HAVE TO BE WIDE RIGHT?!? DAMN YOU, SCOTT NORWOOD!