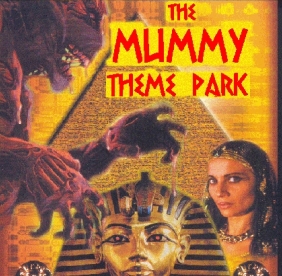 I was at Alton Towers (Fantastic UK theme park to you USA kids) and at it there is this vertical drop ride called Oblivion. I was looking up at it, and it had stopped on the edge of the drop (it always does this, to build suspense and what not), when I realised it was staying stopped, that is, not dropping when it should be. I asked a park worker why this was and it turns out that some guy had got his mobile phone out at the top of the drop, and tried to take pictures. Naturally they shut the ride down, because if it had come out of his hand during the drop it could have done someone some damage, but unfortunately, this left 32 people (2 cars) stranded on the ride for a good 30 minutes!. I hate people.

When I was 10 my family went to Disneyland and some guy started using pepper spray on visitors.

He got tackled by a bunch of guys and taken to the magic that is underground Disney!

I had a guy tell me sarcastically, "Boy, you're a real winner, you are" after I refused to allow him to take his daughter on the log flume ride because she was about 6 inches too short (ie, not even close enough to argue about). Christ dude, do you let her hang out the car window on the way home too?

I used to work at a little kid oriented amusement park in my hometown. The park had those swan-shaped paddle boats; they were the nicest station to work at because there was a lot of downtime while people paddled about the pond. But everyday, without fail, there would be some parent who would yell at us because the boats were "broken". They weren't broken- people just didn't seem to comprehend that if a 7 year old is on one side and a 37 year old is on the other, the weight in the boat is unbalanced and the swan will just go around in a circle no matter how hard you paddle. We had one woman who had to have weighed 250lbs get in a boat with her two year old. We gave her the little safety speech and pushed her off the dock like usual. Somehow she got stuck in the middle of the pond and started screaming for help. We towed her back to the dock using the motorboat we kept for such an occasion. When the woman got back to the dock, she chewed us out for "purposefully" sticking her in the one boat without a motor (none of the boats had motors) and at down in the middle of the dock and started the kind of kicking and screaming tantrum that would make an preschooler proud. Once she calmed down, she was escorted out of the park.

One time another woman got mad at me because I informed her that she could not, in fact, put her 6 moth old on the back of the boat while her and her husband paddled it around our 15 ft deep pond.

I worked at a raft ride all three years of my stint in the amusement park industry.

It was a Saturday in late September and it was really cold outside. My final year at the park was winding down. I got stuck in the tower that overlooks the raft ride for the last four hours of that day. The great thing about that spot is that almost nobody realizes you're there.

During the last 45 minutes or so, this couple in their mid-20's got on the ride and were making out like it was the last time they would ever swap spit with anyone. They rode the water ride in the freezing cold for all of the last 45 minutes of the day. I heard the park-closing announcement go over the P.A. and saw the couple coming towards me. As they passed under me, I dumped my bucket of ice water on them and yelled "*THEME PARK* IS WHERE YOU TAKE THE FAMILY, NOT WHERE YOU MAKE THE FAMILY!"

In 1996, I got together with some friends to go to the Six Flags in San Jose. The last time I had been there was in 1978, when it was Marriot's Great America.

I was really taken aback by the number of Mexican guys I saw walking around with no shirt on to show off their tats.

Then, while waiting to get on the log ride, I heard a commotion. I looked over, and couldn't believe what I was seeing. There was a man and a woman in one of the logs. There was a large black girl, leaning over the log. She had a hold of the hair of the white woman in the log. The white woman's husband/boyfriend (who had been seated behind her) had raised up as much as he could, and was punching the black woman as hard as he could in the face. She was leaning out of the way (and his punches weren't connecting that well, but they still had to hurt), but she wasn't letting go of the white woman's hair. They were both screaming at this point.

While I tried to comprehend what I was seeing, a guy just up the line from me had already jumped over the barrier, and ran over. I think he might have had law enforcement training, because he handled it very well. At some point the black woman had released the white woman's hair (probably because she was being punched in the face). When the good samaritan got there he just put up his hands, and got between the black girl and the couple in the log. He held her back, so she could scream at them without losing face ("if he wasn't here...."). This wasn't all that easy; this black girl was pretty tall and big. She was built like one of the Williams sisters. She never tried to to hit the guy who intervened, but allowed him to prevent her from going after the couple again. It was a very brave thing for him to do. Who knows how bad the situation might have gotten if he had not gotten between them. I could imagine the headlines: Race Riot At Six Flags!

I really don't know who started what. I heard some screaming about how the white woman had spit on the black girl? Something went very wrong as the black girl and her friend exited the log, and the white couple were getting in. It was one of the ugliest things I've ever seen.