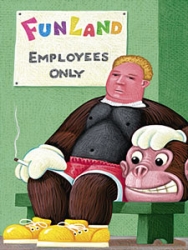 I love going to Six Flags Great Adventure, because there are some REAL winners there. Mostly trying to cut lines to Superman, El Toro and Kingda Ka. The greatest people to watch are the thugs who act all tough and cool in line and start screaming like a little baby on the rides.

A. Her voice was so raspy that it sounded like she was talking over an old radio and

B. Because she had this haze of cigarette smell coming off of her.

She had been staying at the same hotel as us and we saw her in the park one day, it was about 12 or 1 in the afternoon and she was absolutely shit faced. She had an arm around each of her children's shoulders, and her fat belly was hanging out the bottom of her shirt. I'm sure if it were not for her poor children she would have fell to the ground and passed out right there. Needless to say it gave me and my family a good laugh, but my god some people just blow my mind.

Forget about fatties in scooters, there's something far more terrifying to be found at Disney World (or at least there was last time I was there in 2003.)

Picture the scene. You're waiting in line for Splash Mountain. It's long, hot, but you know you're in for a kick arse 7 minute log flume ride.

And then you see them.

Your heart sinks. A group of over excited Brazilians heading towards you. Like a swarm of bees they take over the line with their fucking yellow t-shirts. Ducking, diving, yelling, shoving, pushing, line cutting like crazy. Then just like that, they're gone. Next thing you know, five minutes later you see them go by in a log while you're still waiting in a 45 minute line. Bastards.

At least with fatties you get to laugh at them as they desperately try to squeeze their tremendous girth into a space rocket or log or whatever. Brazilians are the masters of line cutting and there's nothing to laugh at at all.

I think animals kick ass and I love to visit different zoos. A pet peeve of mine is when parents feed misinformation to their children because they can't be arsed to ask a tour guide or zookeeper. So some of the interesting things I've overheard at the zoo:

"Look Shakeem, it's a waltrus!" (pointing at the walrus, also yes the kid's name was Shakeem)

"That's a penguin" (pointing at a polar bear)

"Haw haw that elefrint be eatin' its own poop!"

"Alligators and crocodiles are the same"

"Oh honey look at the weasel" (a sea otter)

"Horses can eat other horses"

"Haha that dog has a beak" (this was a pelican)

Behold the highest tier of the animal kingdom.

a few years ago at Disney World in the MGM studios, i was waiting for the ferry thing that takes you back to your hotel, and there is this woman and her son in front of me. the little boy sees something near a fence and proceeds to walk towards it and pick it up, a used cigarette butt. his mom freaks and pulls him away, and by doing that his head flies forward and smacks into the fence. the mom starts to frantically scrub his hand with an anti bacterial gel, yelling at him for touching the cigarette.