SamuraiPaul sacrifices color for style in the same way that Tommy Lee Jones sacrificed hetrosexuality for humiliation as Twoface. 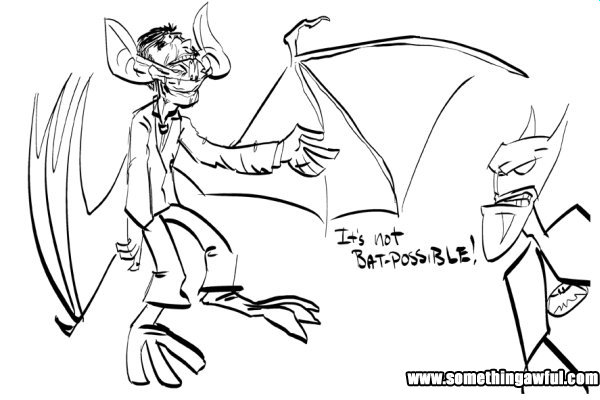 It looks like tadashi's Batman is the world heavyweight champion so expect to see him in a cage match against The Ultimate Warrior next month on Pay Per View as spandex collides.

I haven't seen such a hilarious lampooning of a beloved cinematic figure since the last parody movie by 19 of the 32 guys who produced Scary Movie 2. Thanks to all of the forum goons lurking deep within their own Batcaves (or basements) for contributing some drawings that looked like Citizen Kane compared to Bob Kane. Next week's Comedy Goldmine will focus on another Heath Ledger movie, as we journey back to 2005 to relive the greatest Brokeback Mountain jokes of all time. Only one Photoshopper can walk with the illustrious pink cowboy hat. Find out who wins next Tuesday!