First, some back story: My girlfriend needed some work done on her car that our normal mechanic said the dealership would have to take care of (not sure why exactly), so she spent the better part of this afternoon at the local VW outlet (Walker VW in New Orleans for anyone who's wondering) waiting for them to tell her what was wrong with her car. After about three hours, she finally talks them into just giving her a loaner car so she could leave, and they give her the keys to a 2006 Jetta. She got in the car and drove home without incident.

I got off work early today so my girlfriend and I got home around the same time. We talked for a few minutes, then she left to go grocery shopping while I changed out of my work clothes to take the dog for a walk. Girlfriend walked out, about a minute passed, then she burst back in and screamed, "My fucking loaner car is on fire!"

I immediately kenneled the dog and ran outside, and sure enough the car has smoke billowing out from under the hood, which eventually turned into a pretty good sized flame coming off of the hood itself (I'd estimate it was about 3' off of the car). Apparently the fire had started out of nowhere during the few minutes between when she walked in and walked back out, and a guy who happened to be walking by had called 911. After I had stood there watching and trying to think of something intelligent to do for a minute, I ran inside and got my camera just as the fire department was showing up: 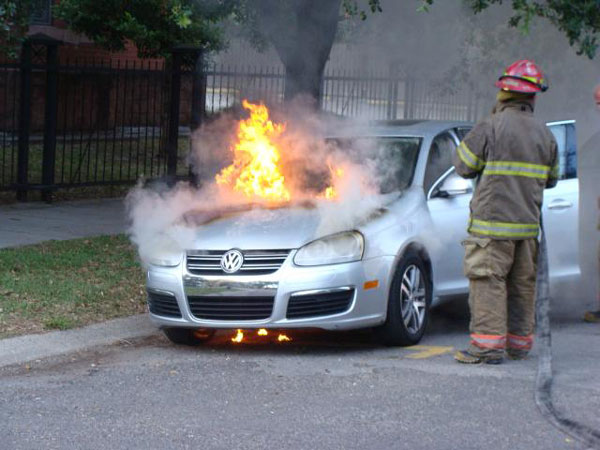 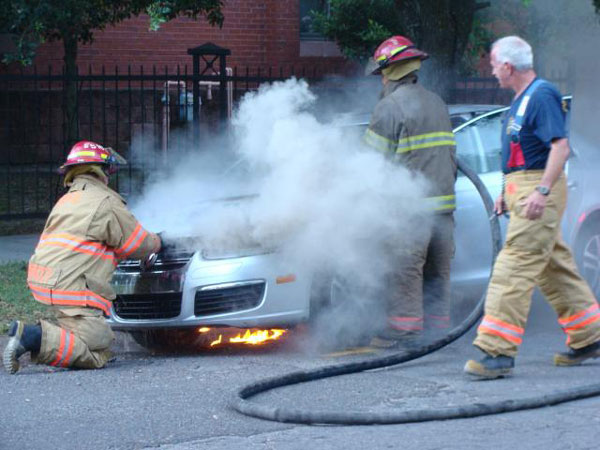