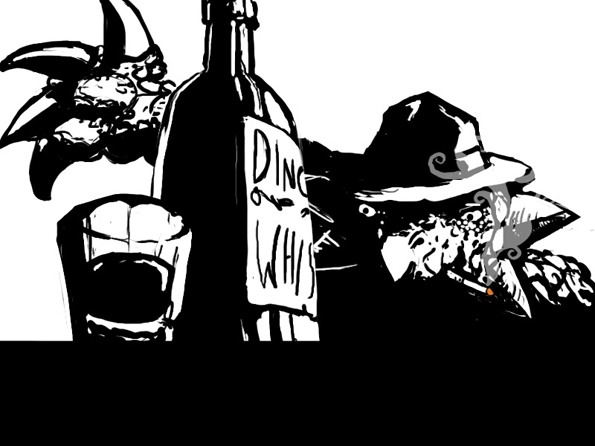 Late one afternoon in March I was slumped against the rotting fir tree I call an office, fighting off the last fingers of a hangover. I knew what would fix it, but I opted to chew a few pine needles instead.

I heard an uncertain rustling through the brush and turned. She was an avaceratops, prettier than most. If you like frills, that is. I've always been more for the "red in tooth and claw" types myself, but some have said that's a failing of mine.

Her eyes darted around nervously, looking for a place to sit. "Keep looking, Toots," I thought. I hocked the big rock for bail money last winter, and the spare log ended up a casualty to a somewhat spirited conversation I had with some big Alamosaurs a few months before that. 'Course, if I was ever going to buy a new chair I'd need to have a case, so I stood up, sketched out a smile, and offered her my seat.

She simpered and dabbed herself with a handkerchief. "Oh thank you, I just don't think I could walk another step today."

"And why is that, ma'am?" Half gofer, half shrink, this job. That's what they'd warned me about when I left the force.

"I had to walk all the way from - well I... I just ran. Until I couldn't anymore. I confess I hardly know where I am at the moment," she said.

"Hell Cr-, uh, Jordan, ma'am." Near enough, although rents near quadrupled between here and Jordan proper.

She didn't seem to know what to make of that, so I pressed on.

"Oh yes. I don't know why I did it. Silly of me. I should have stayed to make a report. It was instinct, I suppose."

"Make a report?" My head started to throb.

"Why yes, to tell them how I found the body." She blinked at me with her big doe eyes as if I should have guessed.

"Oh, I really must go," she said, standing up. "I should talk to the police, or a detective, or someone!"

"I can help you with that, ma'am," I said. She looked at me blankly.

She looked around my office, taking in the paperwork, the license tacked up to a tree, and the framed newspaper headline announcing my biggest investigative triumph to date, "COP TRIPS PERP, FOILS GETAWAY."

"I suppose you are," she said. She didn't sound any happier about it than I did.

After a quick rundown of the particulars - nothing for the pulp mags, just a new secretary, a wealthy business-type boss, a blunt object, and an empty safe - I ushered the lady out with a fresh handkerchief and directions to a bus stop back to the right side of town. Miss Eugenie Dalrymple, secretarial school valedictorian, showered me with thanks effusive enough to make me suspect I'd just taken on this case pro bono. Oh well, so I'd miss a few rent payments. I could sleep in the office. The cockroaches got lonely at night anyway.

I sat at my desk and tried to think investigative thoughts. Nothing came. I reached for a bottle of inspiration, but it was empty. Figures. Not bothering to lock up, I shuffled out and headed for the corner store. The sun was just starting to set. Still too bright for me. I winced and regretted leaving the comfortable dimness of my office.

Luckily, right then a rock answered my prayers. One hit and all the lights went out. Somebody up there likes me. 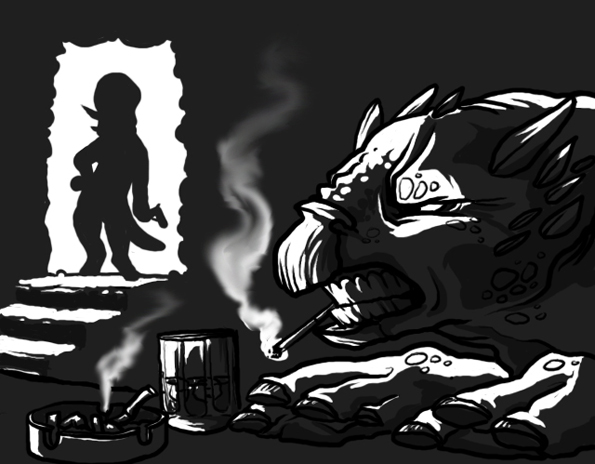 "Check his pockets." Stone grinding on stone, deep and remote.

"Just do it already."

A wide, vaguely fishy-smelling beak rifled through my personal effects. Anatotitan, maybe a Cionodon. That'd be Doc Ebs's gang then, unless the Bambiraptors wised up and started hiring muscle tall enough to sap a guy on the head.

"Whoo-ee he reeks," Beaky said. "Guess all the gossip's true."

"Guess you can't blame a man for turnin' to drink, considerin.'"

"Who said you could use your mouth for talking? You got it or not?"

"Jeez, Morty. I got it!" Beaky stood up, his voice muffled like he was holding something. I was pretty well awake at this point, but I played alphadon. Call me antisocial, but I was in no hurry to make friends on this particular occasion.

Somebody kicked me with a leg the size of a tree trunk and then I heard them leave. Four heavy footsteps and two little skittery ones. I waited until I was sure they were gone, and then a little while longer just to be sure. Finally I shifted to my side and opened my eyes.

The sun was down now, and the sky was that deep blue-black you only get in the neighborhoods where people like to shoot out streetlights. I'd been out for at least an hour, I figured. Aside from my welcoming party, nobody had bothered me. Or offered to help. My mother asks me why I don't move out to the suburbs, but it's the people that keep me here, I tell her. The sense of community.

I rolled over and vomited. That must have been what I needed, 'cause after that I found I had the energy to stand up. I did so, gingerly, and touched the gryp-egg on my head. Considering I've got about half a foot of bone covering everything but my eyeballs, whatever they hit me with must have packed a wallop.

I started towards the liquor store again and then remembered the beak going through my pockets. I groaned and patted myself down. My wallet was still there. Now that's neighborly. I opened it up - the only thing missing was the business card I kept in there. "Art Biedelman, PI. No job too big or small." I'd wanted to get a little insignia of crossed switchblades on there, but that cost ten cents extra.

I double-checked again just to be sure, turning out every pocket, but both my matchbook and my lucky nickel were still there. Maybe they just had discerning taste, since the matchbook was empty and the nickel was a slug. I wondered why they went to all that trouble just to get my card. Maybe they'd lost their phone number and needed to borrow mine. I shrugged and went on my way.

Vigo's Sundries and Spirits bathed me in reassuringly artificial yellow light. I headed up to the counter, where Vigo, a fat Stygimoloch with a skull as thick as bogwater and twice as ugly, sat reading the betting papers. His lips moved while he did it.

"Pick any winners today?" I said, trying to sound like I cared.

"Ah, it's all rigged," Vigo said, flinging the paper down on the counter. "What can I do you for?"

"The usual," I said. Vigo reached behind him and pulled a bottle of Old McHenry off the shelf, grunting from the exertion. He plunked it down in front of me and wheezed.

"One twenny-five." It was highway robbery for that swill, but I paid it.

"You see the evening paper yet?" Vigo said, pushing it towards me. "Some Nob Hill mucketymuck got hisself killed. People are suspectin' the little secretary."

I flipped the paper open to the front page and saw a photo of the recently deceased, along with a grainy school photo of my newest client. Everybody looks sinister when rendered in ink and newsprint, but on her face it didn't quite sit right. Call me soft-hearted.

"You Biedelman?" I turned to see who was asking. Two troodons in city blues lurched towards me, brandishing badges.

"Yeah, but you're going to have to take my word for it. I'm all out of calling cards."

"Good," said the shorter one. "Come with us, you're wanted for questioning."

They muscled me into a car and took me downtown without another word. At least they had the courtesy not to handcuff me.

Down at the station they dumped me in an interrogation room and forgot about me for approximately an eon. By the time the door opened again I'd counted all the bricks in the walls and was making good progress on the ceiling tiles.

Finally an Ornithomimus in plainsclothes came in. Normally those fellows look kind of nervous and shifty, but this one had hard eyes. A good cop face. I remembered practicing mine in the mirror. He crossed to the other side of the table and sat down.

"You oughta teach your boys to write up reports, so you don't have to repeat questions that get answered in the field."

He ignored me and held up a card. Reading from it: "Art Biedelman, PI?"

"Did you really need a cue card for that one?" I said.

He fixed his eyes on me and slid the card across the table. I picked it up.

"Funny, I used to have one just like this. I kept it cleaner, though."

"Briefly. I gave her directions to the bus station once."

"Yeah well later someone gave her directions to the morgue. You know anything about that?"

"Gee, I really wish I could help, officer."

We went around for a few rounds like that, but he didn't have anything on me and he knew it. By dawn I was a free man again. I bounded down the wide marble steps outside the station - built at great taxpayer expense - and badly wanted that drink I'd left on Vigo's counter.

I surveyed the terrain and spotted a greasy-spoon joint down the way. Maybe coffee would set me right. I looked both ways like mother taught me and crossed the street.

My foot hit the curb wrong and I tripped, landing flat on my face. When I got up I was eye-to-eye with an Allosaurus.

"Hey Bruiser. You get that check I mailed you yet?" I said, with as much cheer as I could muster.

"Oh, well I guess it just got lost in the mai-" I never got to finish the sentence. I tried to get a few whacks in with my tail, but I'll never know if they did any good. A crunch, a long, horrifying gulp, and that was that. I suppose the cockroaches will just have to fend for themselves now.