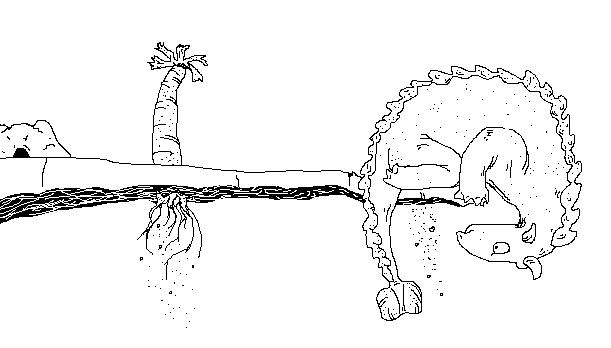 If there's a dame out there that can't be calmed with a good tail-club to the face, I ain't met her yet - so when that meter-tall drink of water came sauntering into my cave sobbing for a smoke, it was everything I could do to keep from giving her the business so we could get down to it.

The only thing that stopped me was the ring on her vestigal claw. She was a Banner dame, born in money and probably planning to marry into even more. These velociraptor chicks were all the same: fast-drinking, fast-thinking, fast-to-leave-you. Feathers and fury in the sack, but after that it's nothing but lonely nights by the watering hole.

She took a seat without saying a word as I wondered to myself who she had taken down this time.

"What can I do for ya, Red," I said, staring off at nothing in particular. "Who was it?"

She understood I knew her angle. She didn't waste any time.

She nodded. "He's one of the Dromaeo boys. I told him what we was doin' was all in good fun, y'know? I says to him, 'This don't mean nothin' to me and it ain't to mean nothin' to you, understand?' and he says, 'Ain't nothin' to me, either,'" and that was all.

"But after we went our separate ways, he starts followin' me around, see? Hidin' in the bushes and leaving these gifts."

She held out a bloody tarchia horn.

"And I says to him, 'You can't keep doin' this, we got appearances to keep up, you know our kinds ain't supposed to mix,' and he flips out and next thing I know he says he's gonna make sure I end up at the bottom of them tar pits!"

She was starting to get upset. I shushed her. After a moment, I leaned forward and gave her the deal.

"Utahraptor ... they're big fellas," I said. "You need a pachysephalosaurus or a parasaurolophus taken out, that ain't nothin' - just big, dumb brutes with a whole lot of moxie and not much upstairs. But you come in here with your Banner family ring havin' just messed with a Dromaeo boy and thinkin' I'm just gonna jump to put myself in the middle a' them two families?"

"I ain't know anywhere else to go," she said, her feathers ruffling.

"Yeah, I know you didn't," I replied. "I know you didn't. You came here 'cuz ankylosaurs keep their secrets and I'm good at keepin' more than just my own. And I'll help you. But it's gonna cost ya."

She looked down at her ring.

"You know my connections," she said. "You know I can get you whatever it's gonna take. Just get it done, please. I ain't meant to go out like this!"

"Ain't nobody meant to go out like this," I said. "But I got more than a few good friends sleepin' under rockpiles that thought the same thing. Life ain't fair, honey."

She left without saying another word, nodding to me before exiting the cave. I nodded back.

Utahraptors. Big, ugly brutes. Fast, though. Clever, too. You stare at them, and they stare right back. That's usually when they get you - not from the front, but from the sides. They got them big, honkin' claws that just scream 'overcompensation' and they slash at you with 'em like you're nothin' but fresh meat because that's all they see. Point is, you're alive when they start to eat you. Them Dromaeo boys don't screw around. If one of 'em said Red was gonna end up in the tar pits, she'd be lucky if she was the only one in her family that ended up swimmin' in the black. If I was gonna take this guy down, I'd have to find a way that didn't leave anything - no traces, no witnesses.

I looked at the overcoat hanging from the jagged edge of the cave wall. It was in tatters, because dinosaurs can't wear coats. I shrugged and walked out into the sunlight.

People think we're all about the armor, us ankylosaurs. Like we don't do nothin' but hide. Nature gave me this tail for a reason, though, and I'd like to think that reason is beatin' the hell out of no-goods who send dames runnin' into my office all a mess. Sure I've taken some lumps and I ain't as quick as I used to be, but the final count at the end of the day has always been me one, the other guy zero. That's all that counts out here, and that's why they come to me. 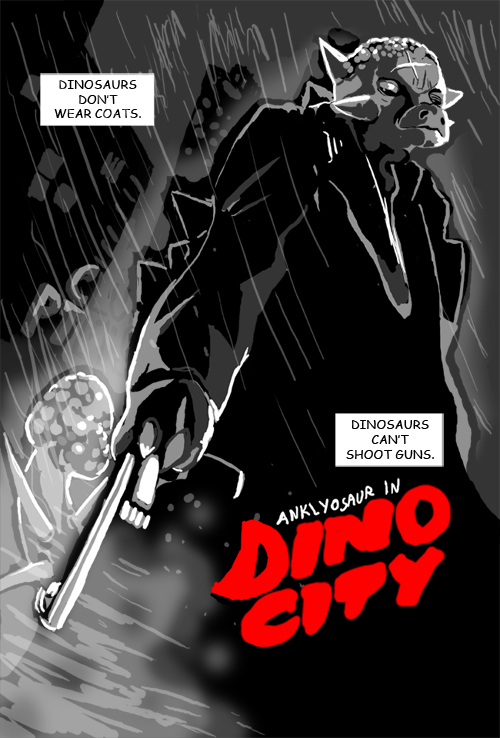 It took a plenty long time for the sun to drop below the trees that evening, and I ended up spending most of the day chasing tail down at the watering hole. If I was gonna to take this boy down I was gonna have to do it quick and quiet-like, under the cover of night. The moon wasn't hangin' too brightly in the sky and most of the stars were covered by clouds, so I kept it low and slow as I wandered up to the Dromaeo estate's back gate.

Two guards. Pachies. They went down like a couple a' sacks of rocks. I kept near the ground and had made it all the way up to the Dromaeo cave when-

It was another pachycephalosaurus - he had tailed me all the way in. I barely had time to react before that big ugly domepiece of his was up between my third and fourth ribs. I felt them shatter, and gasped for air.

"Oh, look at the tough guy, with his fuckin' guido spikes and his nutsack hangin' off the back a' his tail," the pachy said, ramming me again and again.

I swung my tail around to try and get a shot at him, but it got caught on a tree. I hadn't seen it when I turned to look at the goon trying to bury his face up my nipple. I was on my belly, struggling to get up. From behind us, I heard a familiar voice. One of the Dromaeo boys. The Dromaeo boy.

The pachycephalosaurus chuckled. Fuckin' sycophants, all of 'em. The Dromaeo boy gave me a little kick to the ribs. They felt like a bag a' sand, and his claw cut 'em up bad, too.

"She'll be thinkin' twice 'bout what she did when I leave her out for 'dem nanotyrannus kids," he said. "Shame you ain't gonna get to see it go down. How much she payin' you? Huh? Or are you doin' 'dis pro bono hopin' she goes pro on your bono?"

I snickered. It hurt.

"Red ain't paid me nothin' yet," I said with a gasp. Blood was trickling out the side of my mouth. It was coppery. "Tell you what, though, she's gonna love knowin' the way you went out."

I braced myself. This was gonna hurt.

I rolled over. Hard.

I felt the bones in my ribs crackle against each other, grinding away and shifting out of place. As my weight shifted and my spikes came down, the Dromaeo boy and the pachy - bald-headed pieces of shit, every last one - had time to utter one final vulgarity between 'em. They crunched under me.

"'cuz dames love a good jigsaw puzzle," I said with a laugh. It hurt.

I loaded the kills on my back plates and made the long walk back to my cave with a couple a' busted ribs and a mouth leakin' red all over the damn place. I stored 'em away in the very back of the place to make sure nobody would be able to find 'em if they came poking around, then went to go rest up. Tomorrow was gonna be a big payday, for sure. More than that, any day you can make good on a promise to a dame is a fine day in my book. I slept awful damn good that night.

The next morning dawned and she was at my door again, ol' Red.

"I heard tell there was a ruckus at the ol' Dromaeo estate last night," she said. "Ain't suppose you got anything to do with 'dat?"

Red's eyes told me all I needed to know. She looked down at her ring, then back up at me.

"You ain't in any condition to take any earnin's 'dat way," she said with a giggle.

"Maybe not, but sometime soon," I said.