Sooner rather than later, imsuxok? was back and he had one hell of a story to tell: 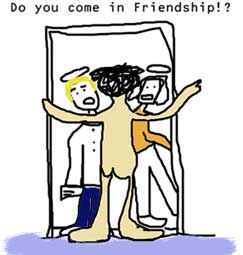 I opened the door to be greeted by a meek looking man in his mid 30s and a vapid woman in her late 20s. They introduced themselves as Jehova's Witnesses and asked if they could have a moment of my time. "Do you come in friendship?," I asked. This question appeared to puzzle them, but unwilling to start things off on the wrong foot, they answered yes. "Well then! Please come in." I led them to my TV room where I told them I was just in the middle of something and I would need a few seconds to finish up. I proceeded to turn on my TV and start up a game of PONG (I have a divx/games computer hooked up to my tv running Mame, among other things). 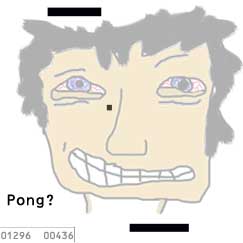 An uneasy silence filled the room as the seconds turned to minutes. Eventually, one of them chirped up, but I interrupted him before he could say more than a couple of words. "Sure, you're welcome to play," I exclaimed enthusiastically. They shot a quizzical glance at one another and tried to shift into a discussion about their religion. After a little bit of cajoling, the man begrudgingly agreed to play. "Ok, but only one game," he said. "My, they must be hard up for members," I thought to myself.

While we played, I extolled the virtues of the cutting edge video game technology that is PONG. My elaborate description of the ultra-high contrast video rendering was met with uneasy laughs; I believe they were starting to think I was a little nuts at this point, for even the layman knows that PONG is far from cutting edge. 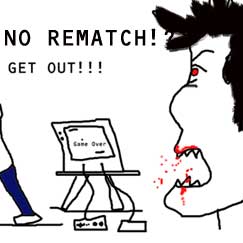 Almost as soon as we had begun, the game was over and I was victorious. I think he threw the game on purpose so that they could start talking about Jesus and blood drinking or whatever else they had on the agenda. Of course, I would have none of that. I pretended to be deeply offended that a man who professes to be religious would be so brazenly deceitful and then proceeded to demand a rematch. When he declined to the rematch, I threw my gamepad to the floor and began to usher them towards the door. They were completely taken aback and tried to stammer out an apology; But, whenever they tried to speak, I bellowed (in a hammed up shakespearian actor's voice): "YOU PRETENDED TO COME IN FRIENDSHIP! BEGONE! BEGONE!" It quickly dawned on them that they weren't going to make any more progress with me and that their lives may be in danger if they stayed any longer. They turned their backs and fled for the door.