A little while ago, we conducted an important scientific experiment studying the worst human beings around in theme parks. Then it was onto exploring the wonders of the average Walmart shopper. This time around, we're opening it up so that disgusting individuals found anywhere you damn well please are eligible for mocking. Read these stories of civilization at its finest courtesy of our forum goons. You'll feel much better about yourself! Unless your fingers are stained with cheese or chocolate or tears. 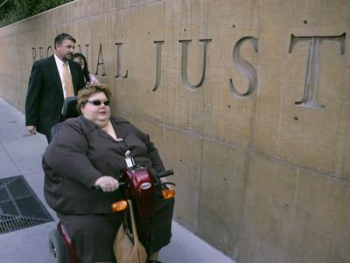 My sister got slapped at Wal-Mart. This little girl came up and started playing with the keys on her belt clip, my sister tried to brush her off, and the girl's mother just came up and hit her.

Then again, I guess Wal-Mart isn't exactly known for dignity and class.

I saw a kid that went to my school wearing a towel as a cape, with his arms outstretched, running around his front yard. Alone.

I saw a good one at the airport the night before Thanksgiving. I was picking up my grandmother, who is legally blind, so I had a gate pass to get into the terminal and meet her, even though I wasn't actually flying anywhere myself. So, I was just surfing the net and people watching, and this forty-something year old blonde terror comes streaking out of the ladies' room next to grandma's gate and confronts the ticketing agent.

"DID YOU STEAL MY BAG?! I left it in the bathroom stall and when I remembered about it I went back and it was gone."

Now, of course, when you leave your luggage unattended in a busy airport, the obvious reason it went missing is because the airline staff stole it.

The agent explained that if it had not been stolen by another person in the bathroom, TSA had likely confiscated it, as their policy mandates that bags reported unattended will be taken away and inspected and can be claimed by the owners after a security check is completed and proper paperwork is filled out.

Of course, the woman throws a goddamned hissy fit about how she's going to miss her flight and her whole LIFE was in that bag, and she has no TIME to go downstairs to the TSA station and do all that.

Okay, next time, don't leave a giant suitcase in the freaking bathroom stall when announcements run every fifteen minutes about how security measures insist that you stay with your bags at all times.

More often than not there will be one or two people drinking at the station whenever I go for the train. Most of these wonderful specimens will have two or three kids in tow. When they travel in couples they seem to put on a sort of cabaret for the normal passengers. Lots of angry shouting, bitter recriminations and threats of violence make for a nice commute. On Friday one shirtless guy decided that he was sick of his "fucking cunt" of a wife and so sat down one end of the carriage talking shit about her, pausing only to drink from his bourbon and coke.

I was at a sort of cheap resort in Hawaii, out by the swimming pool. This lady had a toddler who she was bopping around with out in the water, so that's fine. Then she decides to change the kid's diaper on one of the lounge chairs. Ok, kinda gross but I guess I can handle it. But when she got the kid naked, instead of wiping him with a baby wipe or something she takes him over to the pool and starts DUNKING HIS SHITTY ASS IN THE POOL WATER. Dunk, dunk, dunk! For Christ's sake, lady! At least pretend to care if the pool is full of your baby's shit-chunks.