This thread needs more war profiteers, and not just your Halliburtons/KBRs. Too much focus on the big players, not enough attention on the little guys with the vision to punch above their weight in the "evil fucks" stakes. How about a little Custer Battles up in here?

On supply of forklifts:

Custer Battles stole forklifts from Iraq's national airline, repainted them, then leased the forklifts back to the Coalition Provisional Authority (CPA) through a Cayman Islands shell company - charging an extra fee along the
way.

On a contract to secure Baghdad Airport:

Complaints about Custer Battles performance at the airport began almost immediately. Col. Richard Ballard, the top inspector general for the Army in Iraq, was assigned to see if the company was living up to its contract, such as it was.

"And the contract looked to me like something that you and I would write over a bottle of vodka," Ballard says. "Complete with all the spelling and syntax errors and annexes, to be filled in later. They presented it the next day, and they got awarded a - about a $15 million contract."

Custer Battles was supposed to provide security for commercial aviation at Baghdad airport, including personnel, machinery and canine teams to screen passengers and cargo. But the airport never re-opened for commercial traffic.

As for the bomb sniffing canine teams, Ballard says, "I eventually saw one dog. The dog did not appear to be a certified, trained dog. And the dog was incapable of operating in that environment."

Asked what he meant by "incapable of operating in that environment," Ballard says: "He would be brought to the checkpoint, and he would lie down. And he would refuse to sniff the vehicles."

The handler, Ballard says, "had no certificate and no evidence."

"So neither the dog nor the handler were qualified?" Kroft asked.

"I think it was a guy with his pet, to be honest with you," he replied, laughing.

In a memo obtained by 60 Minutes, the airport's director of security wrote to the Coalition Authority: "Custer Battles has shown themselves to be unresponsive, uncooperative, incompetent, deceitful, manipulative and war profiteers. Other than that they are swell fellows."

On supply of trucks:

The Coalition Authority not only refused to throw Custer Battles off the airport job, it wrote them a glowing review and continued to give them contracts including one to supply logistical support for a massive program to replace Iraq's currency.

How did Custer Battles perform that contract?

"Absolutely abysmally. I mean, it was beyond a joke," says British Col. Philip Wilkinson.

Wilkinson was a colonel in the British Army and was assigned to the Coalition Authority's Ministry of Finance and charged with providing security to convoys that traveled all over Iraq, loaded with $3 billion in cash. The trucks were supplied by Custer Battles.

"And you can imagine, open trucks with that sort of money on the back, was just a red hot target for not only terrorists, but criminals," Wilkinson says. "And, therefore, we needed trucks that were going to work. When those trucks were delivered to us, some of them were physically dragged into our compound."

Wilkinson says some of the trucks "were towed into the camp."

He testified that of the 36 trucks the firm supplied, 34 did not work. When he confronted Battles, he said Battles responded: "You asked for trucks and we complied with our contract and it is immaterial whether the trucks were operational."

That's bad and all but seriously the answer is still the Congo Free State.

The CFS is so immensely evil that James Bond villains would find it reprehensible and over the top, but here is some backstory for anyone who is unconvinced:

King Leopold of Belgium created the company and let it burn and rape the Congo into the ground mostly out of boredom and anger. He had about as much power over the affairs of Belgium as Queen Elizabeth has over the affairs of Belgium. He decided if he couldn't run Belgium he would do the next best thing and just rule a big chunk of Africa. He tried to straight up buy an established colony, and when that didn't work he borrowed against the Belgian Throne's holdings to set up his own colony in the unclaimed Congo.

He started out by sending Henry Morton Stanley to map out the river and find out what he could steal from the natives under threat of death, which ended up being ivory. If this was the British Empire, he'd have sent out a few dozen merchants and soldiers to trick the natives into accepting a pittance for the ivory. Leopold opted instead to send a few hundred mercenaries recruited from the Belgian Army to round up as many able-bodied Congolese as they could near the mouth of the Congo River. Half of them were conscripted as porters to haul supplies past a waterfall up the river to the new colony of Leopoldville (subtle). The other half were given guns and told to shoot the porters if they got too uppity about being enslaved, starved, and killed off. This was repeated until Leopoldville was transformed from a depressing backwater to a depressing backwater with a mountain of corpses and a command post suitable for launching ivory expeditions.

The ivory expeditions were conducted either by concessions companies (like Halliburton) run by Leopold's robber baron buddies, or directly by the Congo Free State through the Force Publique. The Force Publique was a combination of a police force, tax collector, and mobile holocaust brigade. Every Congolese man who had all of his limbs (not very many) and wasn't busy desperately trying to meet his ivory quotas was conscripted into the FP. The FP went up and down the river looking for villages. When they found one, they rounded up everyone in the village. The women were separated from the men, raped, and thrown in a stockade. The children were separated from the men, raped, and thrown in a different stockade. The men were told how much ivory they each had to bring back if he wanted his family released, usually dead from disease by then. This became progressively harder as the Congo rapidly became depopulated of elephants, and eventually the FP changed tactics to scaring the villagers from the village, stealing any supplies left behind, and burning everything to the ground.

Leopold's greed was biblical. He instituted a policy where every FP member had to keep track of the number of bullets he was issued, and for each that was expended a hand was to be presented representing the person killed with that bullet. Of course Leopold was also too cheap to provide food to them, so standard FP procedure was to shoot an animal, eat it, find the nearest person not in the FP, and take a hand. Some enterprising soldiers hoarded hands for their needs in the future.

Eventually the ivory coming out of the Congo was not paying for expansions to Leopold's estate at the rate he was accustomed to. Leopold would not stand for this, because he had big plans for a gigantic greenhouse filled with tropical plants in the middle of Northwestern Europe. He needed some money to keep his colony afloat long enough to find a new type of stone to draw blood from. He got it by agreeing to will the Congo to Belgium after his death in exchange for the Belgian Parliament paying all of the colony's debt off and giving it a boat load of cash on top.

Running out of elephants might have been enough to slow the grinding of the Congo to dust, but unfortunately for a significant part of the 10 millions Africans killed by the CFS, an asshole from Ohio figured out how to make rubber useful. The Congo was filled with rubber vines, which were faster and easier to exploit than farming rubber trees. The Congo is no longer filled with rubber vines.

Leopold managed to grind a massive swath of Africa and its people to dust for more than two decades for money to fuel his habit for expensive homes, yachts, and teenage prostitutes. For the better part of that time, he had convinced everyone in the West that he was actually conducting a massive humanitarian effort focused on easing the white man's burden. When he was finally called out on it he sued his accusers, picked up a French teenage prostitute during a trip to Paris, and fucked her in his massive, insanely extravagant houses until he died of chronic evil poisoning. 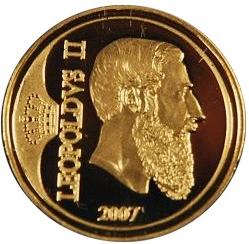 he is still on Belgian money.

Here's a documentary on the CFS: