If it ever kind of strikes you that it's weird that the capital of British Columbia is Victoria, and not Vancouver, reflect on the reason for this:

Possibly the most evil man ever to be responsible for this. A poor Scottish miner, his ruthlessness quickly enabled him to rise to being the owner and manager of a coal mine. Striking it rich, his empire rapidly expanded - and he cut costs at every possibility.

He paid his workers less than all other competing mines, and basically press-ganged Chinese immigrants into the mines - for even less than the white workers. Violently opposed to unions, he built a private militia which broke strikes by attacking workers, burning their homes, and terrorizing their families. The 1887 strike was broken when Dunsmuir's men kicked down the doors of mine workers in the middle of the night, evicted them and their families into the street in their nightclothes, then set the houses ablaze.

After the workers, broke, and without shelter or clothing, capitulated he rehired them all at wages lower than the pre-strike ones.

Using his vast wealth and government connections, he negotiated a deal where the government paid him to build a railroad connecting his mines to the port of Victoria. The compensation? Two million acres of prime real estate, and all the attendant mineral rights.

Oh - and he built a castle: 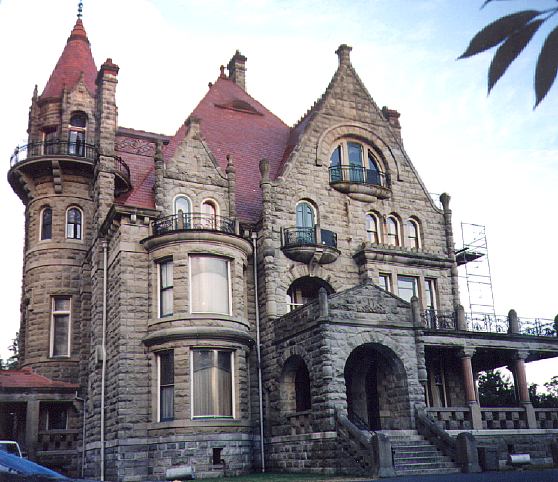 A Nation of Laws:

I've posted another thread about this, but what about Smithfield Farms, the largest producer of pork products in the US? People in the GOP like to laugh about federal funding for pig odor research, but this expose catalogs how people are literally dying in and of pigshit. From the article:

The lagoons themselves [of pig waste] are so viscous and venomous that if someone falls in it is foolish to try to save him. A few years ago, a truck driver in Oklahoma was transferring pig shit to a lagoon when he and his truck went over the side. It took almost three weeks to recover his body. In 1992, when a worker making repairs to a lagoon in Minnesota began to choke to death on the fumes, another worker dived in after him, and they died the same death. In another instance, a worker who was repairing a lagoon in Michigan was overcome by the fumes and fell in. His fifteen-year-old nephew dived in to save him but was overcome, the worker's cousin went in to save the teenager but was overcome, the worker's older brother dived in to save them but was overcome, and then the worker's father dived in. They all died in pig shit.

The damage is not limited to workers:

Looking down from the plane, we watch as several of Smithfield's farmers spray their hog shit straight up into the air as a fine mist: It looks like a public fountain. Lofted and atomized, the shit is blown clear of the company's property. People who breathe the shit-infused air suffer from bronchitis, asthma, heart palpitations, headaches, diarrhea, nosebleeds and brain damage. In 1995, a woman downwind from a corporate hog farm in Olivia, Minnesota, called a poison-control center and described her symptoms. "Ma'am," the poison-control officer told her, "the only symptoms of hydrogen-sulfide poisoning you're not experiencing are seizures, convulsions and death. Leave the area immediately." When you fly over eastern North Carolina, you realize that virtually everyone in this part of the state lives close to a lagoon. 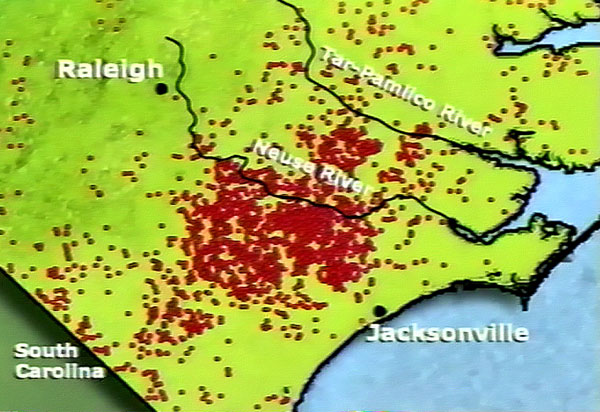 Each red dot is a Smithfield plant. 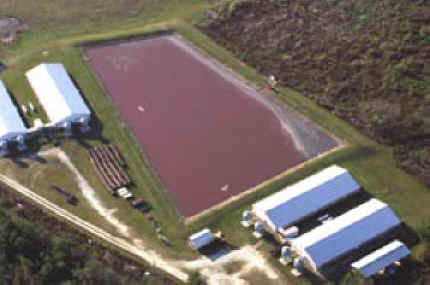 This is one of the lagoons. It's pink because it's filled not just with shit, but with porcine afterbirths and blood and chemicals and medicines and trash and anything that falls through the grates in the sheds where the pigs are kept. And Smithfield makes one of every four pork products sold in the States. They rule the industry. And that's the real problem: industrial farming. Pigs are bred and killed in quantities difficult for us to imagine, but if you took the populations of America's 32 largest cities and killed and sold them, you'd have an idea of the scale on which Smithfield operates. 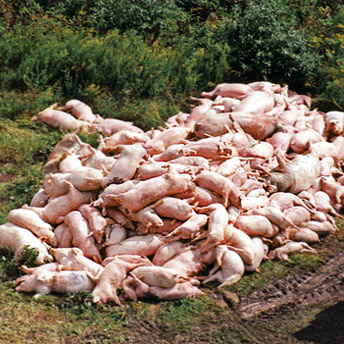 I'm not trying to convert anyone to vegetarianism (I'm an omnivore, personally) but I think we can eat smarter by not buying from industrial food producers like Smithfield. So next time you go to buy pork, spend a minute checking your brands. Buy only from small, local farmers and avoid Smithfield products entirely.

I can't believe nobody mentioned Union Carbide on that list!

That's pretty much all that needs to be said about UC, but here's a brief summary:

The Bhopal disaster of 1984 was an industrial disaster that was caused by the accidental release of 40 tonnes of methyl isocyanate (MIC) from a Union Carbide India, Limited (UCIL, now known as Eveready Industries India, Limited) pesticide plant majority (50.9%) owned by Union Carbide located in the heart of the city of Bhopal, in the Indian state of Madhya Pradesh.

The BBC gives the death toll as nearly 3,000 people dead initially and at least 15,000 from related illnesses since, while Greenpeace cites 20,000 total deaths as a conservative estimate. It is now accepted that at least 8,000 people died initially.

According to the Bhopal Medical Appeal, around 500,000 people were exposed to the leaking tables. Approximately 20,000, to this date, are believed to have died as a result; on average, roughly one person dies every day from the effects. Over 120,000 continue to suffer from the effects of the disaster, such as breathing difficulties, cancer, serious birth-defects, blindness, gynaecological complications and other related problems.

To this day, no major cleanup has ever been attempted or funded by Union Carbide or by their new parent company, Dow Chemicals.