I just realized Executive Outcomes hasn't been mentioned yet. Back when Blackwater was a twinkle in Eric Prince's eye, Executive Outcomes was the biggest name in third world hating mercenaries. When Apartheid came to an end, a lot of South African special forces units were dissolved or left to twiddle their thumbs. Some of them decided they wanted the good old days of things in Angola and exploiting black Africans, so they forced Executive Outcomes.

Rio Tinto, and Shell have all been mention here for among other things hiring mercenaries to kill poor people for fun and profit. Those mercenaries were from Executive Outcomes. De Beers contracted them too. One of their highest level operatives was just extradited to Equatorial Guinea to stand trial for trying to overthrow the government (payed for by Margaret Thatcher's son, of all people).

Sometimes instead of big evil corporations, they were hired by the governments themselves. This usually consisted of them being sent in to kill rebels in exchange for mining concessions. Sometimes this was probably for the best; they were responsible for ending the civil war in Sierra Leone that was so notorious for hand chopping. Other times, though, they were used to crush dissent or train the local military to crush dissent. Their time working in Apartheid military units made them very good at crushing dissent.

Eventually the South African government passed a law that banned the banned mercenary companies, so they packed up to England and integrated into a different mercenary outfit they'd been partners with. They're still running around today doing the same shit, just with a different name.

Oh and this is an individual rather than a company, but Bob Denard was a mercenary who overthrew the government of Comoros four times because they kept trying to be independent of France and socialist.

The Marianas Islands are a US territory. They get to stamp "Made in the USA" on their goods, which is awesome because things made in America are awesome. However, they don't have to follow those pesky things like "rights" or "federal laws", which means that they're ripe with corruption including forced prostitution, child prostitution, and all sorts of other fun stuff.

There is something fundamentally wrong with a CNMI immigration system that issues permits to recruiters, who in turn promise well-paying American jobs to foreigners in exchange for a $6,000 recruitment fee. When the workers arrive in Saipan, they find their recruiter has vanished and there are no jobs in sight. Hundreds of these destitute workers roam the streets of Saipan with little or no chance of employment and no hope of returning to their homeland. The State Department has confirmed that the government of China is an active participant in the CNMI immigration system. There is something fundamentally wrong with an immigration system that allows the government of China to prohibit Chinese workers from exercising political or religious freedom while employed in United States. Something is fundamentally wrong with a CNMI immigration system that issues entry permits for 12- and 13-year-old girls from the Philippines and other Asian nations, and allows their employers to use them for live sex shows and prostitution.

Now what that doesn't mention, probably because we'd run out of space if we listed all the atrocities like locking employees in with barbed wire fences, is that employers will frequently rape the immigrant workers. If the worker gets pregnant, they get a simple choice: have an abortion or go back to China. Going back to China would be kind of difficult since they had their passports taken away from them when they arrived.

So what this really boils down to is this: the government hired Jack Abramoff to basically allow slavery--and that includes child sex slavery--to exist on US soil and Abramoff recruited Tom Delay to help him KEEP IT THAT WAY. Tom Delay, being the big swinging dick that he is, said he was "impressed" at the Mariana's "commitment to advancing the principles of free markets, enterprise, tax reform and other innovative approaches to governance."

What makes this most depressing is that congress knows about this, this situation's been brought up on the House and Senate floor before, and they still haven't done anything.

With regards to my earlier post - as bleak as it is, the nice things about Erie and the Gulf of Mexico is that at least they come back.

I mean, all plant and animal life is dead, but it will come back.

Not so much with coral bleaching - which is much more widespread and dangerous: 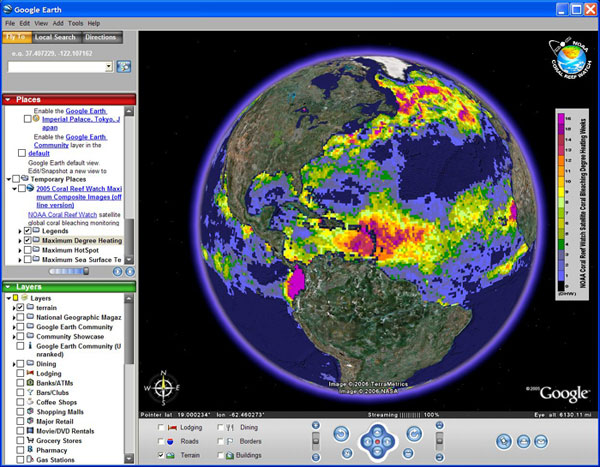 Chiefly caused by global warming, created by man-made emissions, coral bleaching occurs when temperature rises in the ocean kill off the algae that inhabit coral. These dense, lush environments, rich with animal and plant life go from this: 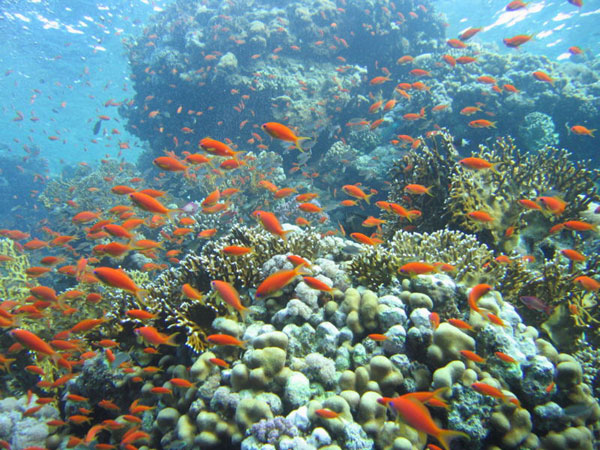 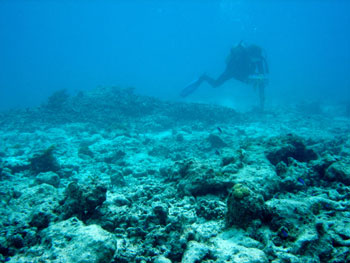 Lifeless, dead, devoid of animals or plants. Some of the richest fishing grounds in the world, and large parts of the oceans' biodiversity are at risk from this effect.


You think that's bad, you may not want to hear about ocean acidification.

The ocean is one of the largest carbon sinks in the world. About one-third of all the CO2 we put into the atmosphere is absorbed by it, delaying global warming. However, this comes at a cost: the pH of the ocean is decreasing at an incredibly alarming rate.

Now, a few years ago, U.S., Japan and Germany started looking into pumping liquified waste carbon from power generation directly into the ocean, to prevent it from reaching the atmosphere. The first small-scale tests they performed in aquariums were very startling: snails and crabs were dissolving practically before their eyes. CO2 in water forms carbonic acid, which breaks down into hydrogen ions and bicarbonate. Free hydrogen ions combine with carbonate ions in the water to produce more bicarbonate. Carbonate ions are required by every organism that creates calcified shells/exoskeletons. We're talking all crustaceans, most mollusks, hundreds of kinds of phyto- and zooplankton, and coral.

Economic: Commercial fishing will not exist in 50 years. Flat out, WILL NOT EXIST. Almost all commercial fish rely on calciferous plankton, without them, they will not survive. All coastal communities worldwide who subsist on fishing will be unable to survive, we're talking hundreds of millions of people.

Ecological: We're talking about a change in the ecology of the ocean unseen for hundreds of millions of years. As best humanity can determine, the oceans have never been affected this quickly by anything before. The corals will die, and then the fish will die, and almost nothing short of a massive shift in human activity will change this. We're looking at oceanic extinction on the level of the big one, 250 million years ago, that killed off 90% of all marine life.

Some choice quotes from a panel of marine scientists four months ago:

"We're entering a new geologic era."
"We talk about it calmly in a way that's not appropriate for the scale of what we are doing."
"Society right now is not willing to pay the tab for a lot of things... we are inflicting these changes and all this chaos on those who will come later."

Worldwide, 1.5 MILLION babies die every year simply because they're not breastfed. Nestle's aggressive marketing campaign (which includes paying nurses and doctors to push the product and giving away free samples in hospitals) is the single biggest contributer to this statistic.

The 1.5m figure is from the WHO and is an estimate that includes the number of babies who die prematurely from diseases that breastfeeding is known to protect against, as well as those who die from drinking contaminated water used to make up baby formula, and those who die of malnutrition because the mothers use less powder to make it stretch further since they can't afford more. But once a baby is weaned off breastfeeding, it's near-impossible to start them again

Obviously, Nestle isn't responsible for the entirety of that figure, but it is one of the biggest baby formula providers in Africa, SE Asia and S. America and it continues to use its aggressive and/or illegal tactics despite promising not to. (Printing health warnings in places where people either can't read at all or can't read the language the warning is written in is a good one. Giving away free samples at clinics and hospitals is good too because it associates formula with health.)