Grossman walks out in a Seahawks jersey, throws dozens of interceptions. 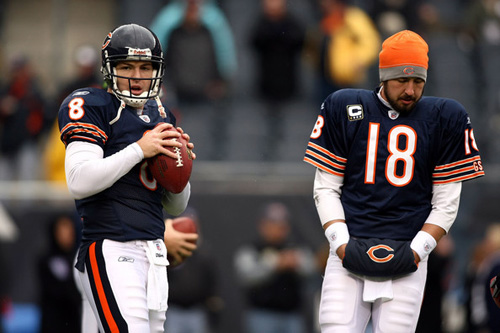 Michaels: Kitna's showing no mercy out there at all. He's got Orton propped up against the turnbuckle and he's kicking him, giving him a spleen and a liver.

Collinsworth: Great technique by Kitna, there. You can see him faking like he's going to go with that big right hand but he's coming with the boot every time.

Michaels: Orton's looking to his corner for a whiskey bottle to try and turn this thing around.

Collinsworth: We've seen him use that thing all sorts of ways. Bashing guys over the head with the bottle, spitting it into their eyes, sending them into a lifelong spiral of alcoholism that will poison their relationships and endanger their health. (chuckles)

Michaels: WAIT A MINUTE WHAT'S THAT? THAT'S REX GROSSMAN'S MUSIC, AND MAYBE HE CAN LEND A HAND TO HIS STRUGGLING TEAMMATE

(the song begins its second verse, the jumbotron video loops)

(Grossman is nowhere to be found)

Tafoya: I just got a text message from Rex Grossman that says "Michele, I think I'm at the wrong arena. Did you say Cleveland or Columbus?"

Tafoya: "Michele, you better send a lawyer, there's Disney on Ice here, and I just threw Aladdin into a pile of prop daggers."

Rivers: I've got something to say to you Jay Cutler, you gutless jerk-face, you cut-rate commodore, and your entire crew of second-city screwballs. We're gonna have a nice clean match, none of that malarkey of the midway, none of your disqualifications, just you, me, my bolo ties, and the entire city of San Diego, you no-good, low-down, clown, when I put you in the Rivers of Dreams. DARN IT!

I'M SURE JAY'S GOT SOMETHING TO SAY TO RIVERS, AND MAYBE HE'LL CHALLENGE HIM FOR THE BELT RIGHT HERE RIGHT NOW

(music plays, montage of text messages flies across the jumbotron)

(no one ever comes out of the tunnel) 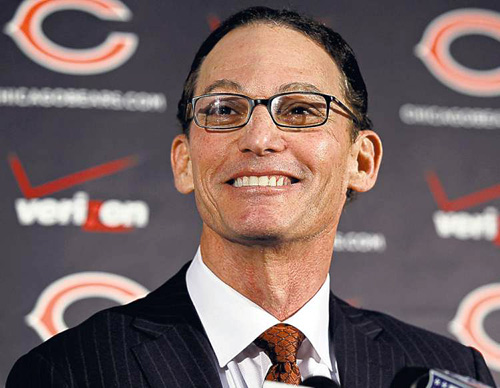 I'VE GOT SOMETHING TO SAY TO YOU, MIKE SHERMAN AND ALL OF YOU PACKERS OUT THERE

I'LL SEE YOU AT THE (drops card)

(gets inadvertently trucked by the down marker)

'CAUSE ALL YOU TREST MANIACS OUT THERE KNOW

(backs up into piece of television equipment, gives himself a wedgie, somehow)

First of all, fellas our goal is to just go out there and wrestle better than those other wrestlers. What's that? No, I'll have to take a look at the tape of that body slam. I think we just gotta go out there and execute. Headbutt. Elbow drop. Jump off the top rope, and then miss and writhe around for awhile.

No that's all. Thanks.

I apologize if my actions took away from the great work of my tag-team partners, the New Zealand guys who stomp around a lot, pummel people and hit them in the face with garbage cans. I probably should have handled it differently when I singled out Rowdy Roddy Piper in an interview with Gorilla Monsoon after I threw him and dozens of other men through the announcers' table. But it is what it is.

Thanks to R.D. Mangles and the Football Funhouse! If you're still in a reading/laughing mood, here are funny articles about related topics like pro-wrestling gimmicks and the Seattle/SF rivalry!