In true horror-franchise fashion, the SA article "The Absolute Worst Freddy Krueger Nightmares" has spawned an unauthorized sequel that involves no input from original creator Zack Parsons! Forums poster Drad_Bert takes the helm this time, with Vastarien handling the Photoshops. 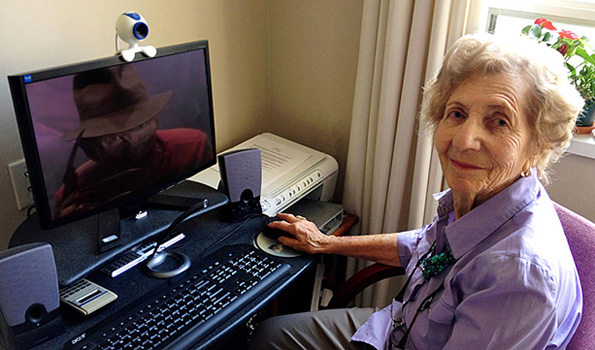 A granny dials up into her internet. Freddy's face pops up on the screen. "You've got hell" She bursts into flames and is replaced by a stuntman covered in goo

Some kids are smoking weed in an alley when Freddy walks up dressed like a gang member. "Wanna get blunted?" he laughs before rounding off their limbs

A Chinese hacker is infiltrating the FBI database when he stumbles on the elm street files. Suddenly Freddy appears behind him. "The east is red!!" he cackles before stabbing the kid and drowning him in the Yalu river

A guy is having a good time reading chuck norris jokes on the internet when he realizes the address bar actually read "freddykruegerfacts.com" Chuck Norris appears on the screen wearing Freddys sweater and fedora. "Good thing I never sleep!" he laughs before roundhouse kicking the guys head off through the computer