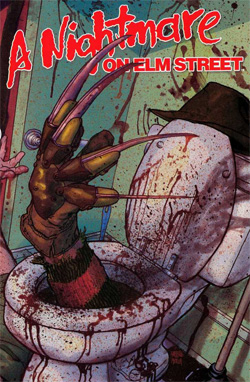 Freddy is an ice cream cone and he laughs while his victim tries to lick him. "I don't take a licking but I keep on ticking." There are clock sounds in the background.

Freddy is a toilet that won't flush a diaper. "You are what you eat so why did you eat a baby's diaper? Are you stupid?"

A fancy rich girl sits down in a cool car that turns out to not be cool at all and it has Freddy's face coming out of the steering wheel and he sticks his tongue out. "Nice car... for a jerk." He gross-licks her hands and that kills her.

A man checks the expiration date on some milk. Seems okay. Pours it into his glass oops nope the milk is Freddy. "Spoiled rotten!" Freddy cackles. The guy catches on fire.

Freddy pops out of a Taz shirt when somebody tries to buy a Taz shirt. "Looking to wear a devil?" he laughs, implying he is a devil. He spins around real fast and slices them up. 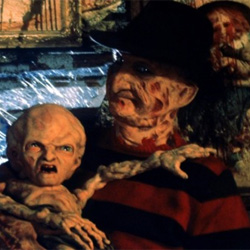 Freddy is mixed up in cantaloupes. "I'm riiiipe!" he says and tries to claw his way unwanted into a fruit salad bowl.

Freddy turns into a skate park and people have to ollie on his messed up face.

Dr. Freddy turns around an ultra-sound and says "Congratulations, it's a 'me'!" and his face is on the ultrasound and then claws bust out of the mom's belly.

"Good luck measuring up" somebody is trying to measure something in a measuring cup and Freddy keeps bumping into them.