A doctor is getting the blood work for one of her patients. She returns to her office with the results. Turns out, the patient is Freddy, who is eating a carrot. "What's up, doc?" he quips before pulling a giant mallet out of nowhere and crushing her with it 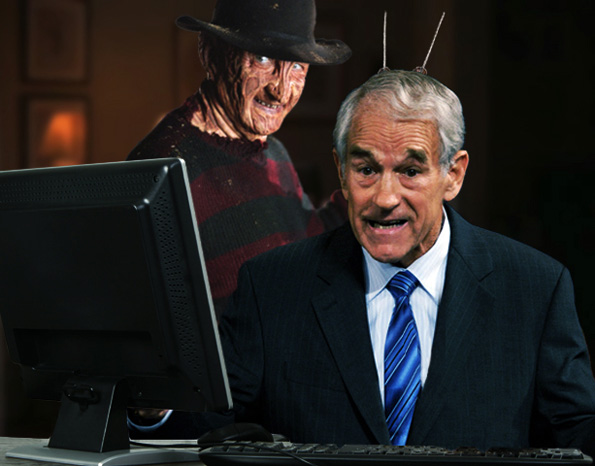 Ron Paul is sitting at a computer, checking the value of gold when Freddy appears. "You're worried about the fed but you should be trying to end the FRED!" Freddy cackles. Ron Paul spins in his chair, trying to grab his decorative antique musket but Freddy gets there first. "Time for a second American revolution!!" Freddy laughs before spinning Ron Paul around and shooting his face with the musket

A kid has a nightmare about changing litter boxes. He goes to open a bag of litter and Freddy's claws cut his hand. Freddy's head pops out with cat makeup on. "I guess the cats out of the bag!" The kid is buried alive in shitty cat litter

A guy is eating potato chips. He reaches into the bag but its empty. He opens a new bag labeled 'Freddy lays.' Freddy's claw bursts out. "Once you pop, you just can't stop!" Freddy quips, referencing the slogan of the popular potato chip brand pringles. The guy is forced to eat potato chips until his stomach bursts.

A man's car breaks down on the side of the road at night in the rain. He goes to his trunk and retrieves his spare tire and jack/tire-iron. Mid tire change, Freddy appears behind the man and says "You look a little TIRE-d" and clocks the man with the tire iron. While the man is splayed out on his back Freddy quips "And now you're a little FLAT" and takes the spare tire and smashes the man's head in, killing him. "I've let all the air out of this situation" mentions Freddy as he dematerializes into the fires of hell.

Freddy halfheartedly stabs a teenage couple having sex, skewering them both and mumbling something while looking out the window. Later we see freddy slump home to a barren apartment where he sits down on a ratty couch and rests his face in his hands, gouging his cheeks seriously with his blade-gloves. Blood seeps down his hands as he sobs wretchedly, the blood is symbolic of tears he can no longer weep due to his demonhood.

Thanks again to Drad_Bert for the theme, Vastarien for the images and Zack for the inspiration!