Of Death and Dying 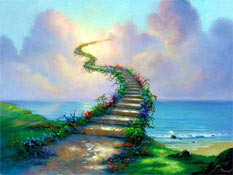 I can almost see the JAVA reflecting water applet.A wiser man than me once said that two things are inevitable; death and I think it was undeath. Eventually you're either going to bite it or you're going to use ancient druid magic to enchant your body as a decay-resistant vessel for your immortal soul. For those of us still working on power-leveling our way to casting the lich ritual we've always got good old fashioned perishing to fall back on. It might not sound like much, and according to most religions it's even worse than "not much", but until we get at least 100,000 or so more experience it's all we've got.

Most religions believe in something analogous to the Christian heaven and hell. One is a vague spiritual paradise that is impossible to imagine because no one these days would really fall for "hanging out with your dead grandpa in a white room while harps play in the background". You heard all of grandpa's stories while he was still drawing breath, why you would want to spend the rest of eternity hashing over the finer points of the time he hit a cow with his Ford pickup is a question left unanswered by the Christian conception of heaven. Then there's hell and depending on which chapter of which book you're reading it can be anything from a lake of fire, to a freezing pit of ice, to being eternally tortured by fiends with implements of cruelty. Grandpa and the cow caper never looked so good, but it can't be all that bad! After all, I eventually got used to this huge fucking goiter I have, doesn't even bother me a bit, so I think having hot needles shoved into my ass is going to be old hat eventually too. 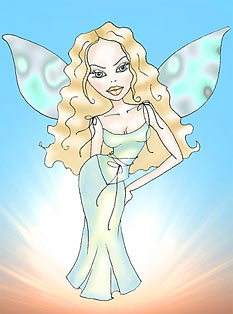 Gah! Send me to hell, please!The whole good and evil afterlife concept is a little irrelevant to Buddhists who have a hierarchy of personal heavens and hells so complicated that their monks hand out Power Point presentations on the subject with all kinds of flow charts and awesome frame transitions where the picture of hell 45 spins off to the side and then the clipart lighting bolt flashes a few times. It's pretty cool, but just when you start to understand what's going on they throw in the reincarnation angle and you're pretty much doomed to a Scanners-esque head explosion.

Atheists have it the best in my opinion, just a big black nothing. Their afterlife is sort of like a dreamless sleep or getting hit in the head with a pitch and waking up on first base. Many are horrified at the concept that there is nothing waiting for us after we get AWPed, but I take comfort in the fact that at least one group has an afterlife belief system where you just sort of sit out the rest of the game. You don't even have to watch it from the sidelines either; you just hit the hammocks next to the playing field.

Then there are all the crazy cults. I think the Scientologists believe that when you die your body gets taken over by a Thetan and he walks around in your corpse like a zombie. Meanwhile you're frying in a volcano where Xenu and his ilk like to hang out thanks to the explosion of a hydrogen bomb. The Mormons believe that, well, I guess they believe that ringing my door bell at 10 PM on a Thursday is a good idea and somehow related to heaven. Personally I think it's more related to me walking out on my balcony and screaming at them to leave, but whatever floats their cosmic boat. Don't forget the Baptists. Here in Chicago they patrol the streets in squads on bicycles like they're in some Christian-themed action show where every drug dealer and pimp is part of a Satanic cult. I'm convinced that they don't even believe in heaven because if you hear their spiel pretty much everyone is screwed to damnation, although if you're Baptisty enough and you ride your bike really good you might get like a not-quite-as-bad version of hell.

Me? I'm an agnostic. From the stand point of an atheist it's a cowardly thing to do because I can't quite commit to the idea that there is no magical wizard controlling things behind the scenes. From the stand point of most religious folk I'm no better than anyone else who isn't in their particular secret club. I'm going to suck dirt one day and because I refused to let their Jesus action bike squad in while I was in the middle of watching a screener of "The Matrix: Reloaded" I am going to be sucking dirt through a lava straw. I see where they're coming from I guess, it's just that none of these afterlife game plans really have all that much to offer me.

To cope with this huge question mark awaiting me at the end of my days I have decided to embark on the glorious journey down the path of righteousness. Ladies and gentlemen, I have decided to create my own religion and afterlife, and none of you are invited. 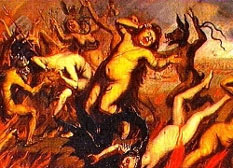 No more worries like this. It's free sailin' from here on out!Members: 1

Core Beliefs: I am awesome.

Worship: Conducted on the couch in my apartment. Service begins with me flipping idly through the channels on Direct TV until I get frustrated and turn on my Xbox. When I repeatedly fail to beat a particular level or enemy I will yell, throw the controller on the floor, and conclude the service by storming back to my computer to voice how much I hate that particular game on an Internet Forum.

Holy Days: Every religious holiday on the Christian calendar that requires me to spend time with either my family or my girlfriend's family. I will celebrate these holidays for the Church of Zacklology by either faking illness or getting in a big argument with someone and locking myself in the bedroom.

Never get less than 6 hours of sleep in a night.

Never do laundry until I'm forced at best to wear clothes that look like they were caught in a shrapnel blast and at worst attempt to fashion pants out of caulk.

Never say "I'm sorry" unless it somehow keeps me out of prison.

Never seed a Bit Torrent once you're finished downloading. Close the window as soon as it says "download completed" and never look back.

The Afterlife: In the complex system of beliefs as dictated on high by the Church of Zackolololology, or whatever it's called, the afterlife is divided into two parts. The first part is called "Freezelandia" and it takes place immediately after the devoted worshipper expires. This transitional afterlife last for about 90 years during which time the departed soul is reborn as the best-selling rapper of all time. He will be granted no less than seven helicopters, five Hummers including a Hummer stretch limousine with a heated pool in the back full of inflatable Hummer toys, 99 rotweillers all wearing diamond-studded platinum collars, a 500 room mansion cut entirely from one massive diamond, and tons of women with so much diamond jewelry that they will be referred to as "the abominable snow hos". At the end of this life the reborn rap star will be blingmogenically frozen.

When he awakens from his Straight Ice Cooler he will be greeted to a realm of eternal relaxation. He will lounge around all day on massive couches playing video game consoles so powerful that all he has to do is think about a cool game concept and it will create the game for him. Periodically he will receive oral sex or be fed cake without pausing from the video game console. Whenever he gets stuck in a game the enemy he is fighting will actually apologize for being too difficult and kill itself in a particularly grisly fashion. In the afternoons the blessed will oversee the summary executions of furries rounded up by his murder squads and his evening will be spent liquefying the brains of people who write erotic fan fiction.

There, I just provided the final solution to the religion question! Sorry if this doesn't actually help any of you, I just had to get it out of my system what with all the SARS and terrorism around.

This Section Zoned for Phriday Development

The passage of time has once again made it possible for there to be a Phriday, which means it's time for us to show you what the SA Forum Goons have cooked up! Livestock here, letting you know that our delicious theme is "Awful Businesses." What's an awful business? Well, here's a pretty good example. I do hereby encourage you to henceforth proceed to yonder Phriday of Photoshop.