Tales from the Zoo

So I'm standing there when suddenly I see a couple of eggs over in the center of the yard. We were to gather the eggs up and send them up to the commissary. Since there were nothing but females in the yard, all the eggs were unfertilized so there was no chance of baby ostriches. Every wednesday was "big fucking omelet day" at the zoo commissary. Shhhh.

I walk over to these eggs and lean down to pick them up. As I do, I sense something behind me. In a second, I see this ostrich out of the corner of my eye. Before I could turn around, she sort of knocked me down on one knee. "Why you mother fucker......." and I tried to stand up. BAM!! She bumps me again from behind and this time she knocks me flat on my stomach. I can hear the people standing on the edge of the ostrich yard laughing!! Here I'm getting attacked by this pea-brained bird and they're laughing their asses off.

Before I can even react, she sits down on top of me. Now these birds weigh a lot!! Probably 400 pounds or so. But not only is she laying on me, she's sort of dry-humping me right in the ass. She didn't know it was my ass, but I did!! She was just defending her nest by grinding me into the ground, BUT I WAS GETTING BUTT-RAPED BY AN OSTRICH!! 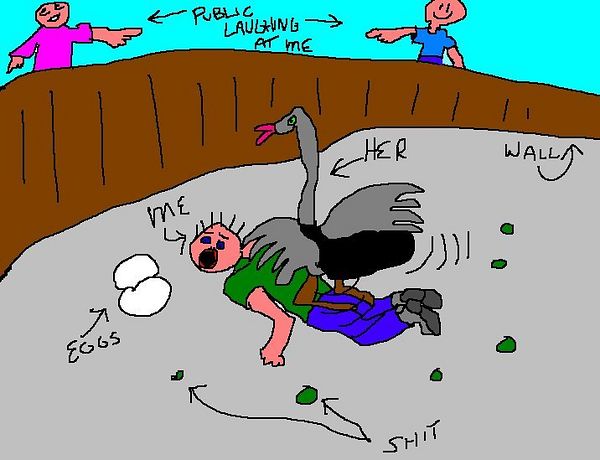 Suddenly I hear Gary's voice screaming at the bird as he comes to my rescue. He's waving his arms trying to get her attention and fortunately it worked. But now she was pissed. His waving his arms like that constituted a threat to the ostrich so she takes off chasing him.

Now we have a HUGE crowd of people standing at the edge of the yard and they are cheering the fucking ostrich. Like I mentioned earlier, when one starts running around, they all do. So before we knew it, we had ten fucking retarded ostriches chasing us. We are completely at the other end of the yard from the barn door so we start running serpentine s's trying to confuse these birds. The audience is now HOWLING with laughter (and hell, I couldn't blame them). Here we are running around like Stevie Wonder at a track meet. I've got 5 birds after me and Gary's got 5 after him.

We are about half-way across the yard when one of the birds gets Gary up against the wall. She's pecking his head and kicking at him. This was not good. He was screaming for help and I went running for him. I picked up a rake that was laying there and started swinging it out in front of me. I totally smacked the bird in the ass with the head of the rake and she turns on me. I took one swing back the other way and cracked that bitch right in the neck.