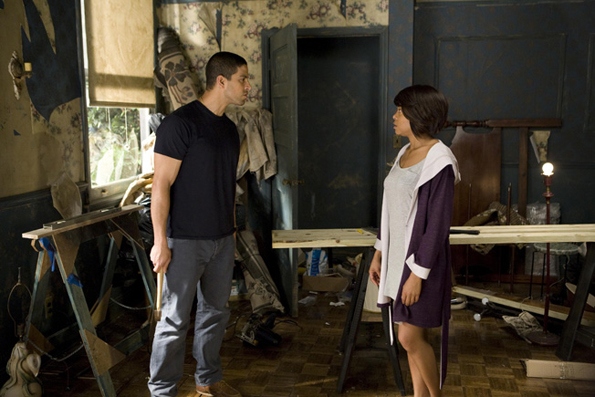 Perry does bad all by his self

I Can Do Bad All by Myself is a title that accurately resembles Tyler Perry's cinematic ambitions. I didn't know they made after-school specials into feature films these days, but this movie is an amalgam of about twenty of them. From long-winded musical numbers about Jesus to several scenes of people crying with a somber violin playing in the background, it is as wholesome as peach pie, which makes it about as interesting as trying to find your car keys.

It tells the not-so-entrancing tale of an alcoholic aunt forced to take care of her dead sister's children. Amongst this perfect storm of clichés is a Colombian missionary determined to show her the path of love, a wise reverend with all the right answers, and my personal favorite, a Tiny Tim character who has asthma and diabetes. The story plods along exactly the way anybody who's seen more than five movies would expect it to, with the protagonist gradually learning not to be selfish and finding true happiness in caring for other people.

What I do not understand are the smatterings of "comedic" moments, such as several instances of adults telling children they are going to shank them or beat them to submission. The actors deliver these lines so confidently, as though I am obligated to laugh. Tyler Perry's Madea character appears a few times, contributing little more than a junky Milton Berle routine.

I had not seen any of these Tyler Perry comedy-dramas before this, and now I am confident I have seen them all. I Can Do Bad All by Myself is not a terrible movie; it is bland, which is a far greater crime in cinema. Still, it is a formula that generates financial success, so I guess I can expect to ignore many of these gee-golly sapfests in the future.