We here at Something Awful are proud to introduce our newest feature, timely reviews of current films written by the so-called experts in Cinema Discusso. Our inaugural entry is a positive review (with a brief negative rebuttal) of what is arguably the first Oscar contender of 2009 (not that it has a shot in hell of winning, considering Tarantino's history with the Academy, but maybe it will pull a best screenplay nomination). Then again, maybe voting members will fall asleep long before it's over and assume it has Best Picture potential based on its epic length (153 minutes) and World War II setting; Hollywood really likes its World War II films. Only time will tell... 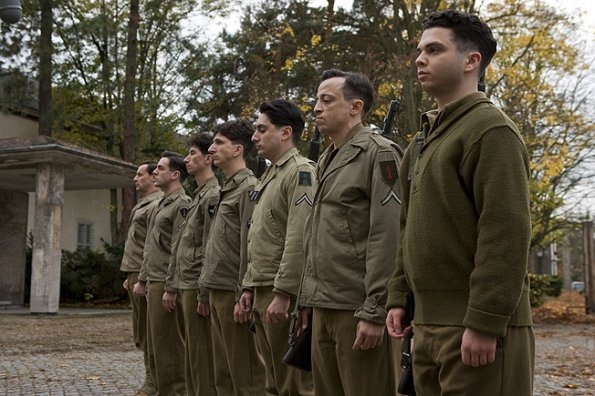 Costumed patrons file out of the stateside premiere, clearly exhausted by its running length.

Ostensibly, Inglourious Basterds is Tarantino's World War II film, but more than that, it is a film about film itself. Its marketing suggests that it's all about Nazi-killing. And, yes, a lot of Nazis are killed in innumerably gruesome ways. The plot centers on a hodgepodge of Jewish-American soldiers, led by the battle-scarred Lt. Aldo Raine (Brad Pitt), unloading misery, terror and destruction on the German forces. The soldiers are played by an eclectic mix of actors, from Hostel director Eli Roth to The Office's B.J. Novak. They scalp their fallen enemies, both to acquire trophies and to fulfill Tarantino's gore quotient.

However, Basterds is not all head-carving and righteous revenge. Pitt is the marketable name here, and he even boasts on-screen German-scalping experience (Legends of the Fall), but he's not the focus. Like Bruce Willis in Pulp Fiction, he's merely another player in Tarantino's signature intertwining narrative, which dances around an ensemble of gifted, mostly lesser-known actors.

Tarantino employs these actors to portray soldiers from the primary nations fighting in World War II (France, Britain, Germany, the Good Ol' U.S. of A and the Inuit nation), but they are also used to represent cinematic ideas of the countries themselves. Rather than discussing Dutch burger names, the characters here frequently discuss the films and filmmakers of their respective nations, explicitly addressing the nuances of their techniques. This international bipolarity even extends to the title, which juxtaposes a faux-British spelling of "inglorious" and an American bastardization of, well, "bastards."

However, the tone is decidedly American. The characters are loud, crass and unsophisticated. Numerous American war films from the days of yore come to mind, from the Indian-slaughtering Westerns of John Wayne to the Nazi-slaughtering war movies of John Wayne. There is also, most notably, a direct parallel to The Dirty Dozen, the plot of which is unsurprisingly similar. As part of a disguise, Aldo is required to speak Italian. He does so with a thick Missouri dialect, which seeps through with embarrassingly regional distinctiveness.

Aldo is required to assume this disguise after their initial, more sophisticated infiltration plan falls through. British soldier Archie Hicox (Michael Fassbender) makes a slight cultural faux pas and pays for it dearly. It contrasts Aldo's gung-ho brashness, reflecting not only the differences in cultures, but also the films that each culture exports. Hicox's initial conversation with his superior (Mike Myers) is stereotypically British, bringing to mind the gin-swilling debriefings of the James Bond films.

The French storyline follows theater-owner and closeted Jew Shosanna Dreyfus (Mélanie Laurent), who spends much of the film smoking cigarettes in a quaint Paris café while espousing the superiority of her country's cinema and concocting her own plan to deal with the Nazis. Her attitude is fostered by the Germans slaughtering her entire family, but her musings frequently touch on subjects dear to French filmmakers' hearts: love, suffering and the intellectual superiority of the French. 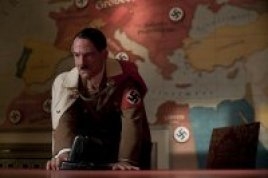 Tarantino spends a lengthy portion of his magnum opus detailing Hitler's early career as a high school geography teacher with a passion for Risk LARP. Yes, this film is that long.

Shosanna is hounded by friendly German solider Fredrick Zoller (Daniel Brühl), a war hero and subject of Joseph Goebbels's newest violently patriotic propaganda piece, Nation's Pride (the film-within-a-film directed by Roth). On the surface, Zoller is a gentle soul, a mainstay of Old World German naiveté and social curiosity. He expertly articulates the virtues of German directors like Riefenstahl and Pabst, going into great detail when discussing Goebbels's desires to cast away German Expressionism in favor of films with little moral ambiguity. This lengthy film discussion is the hallmark of a Tarantino script, overtly and superfluously spelling out the film's intentions with long strings of dialogue, proving he is still better at telling than he is at showing.

Zoller's charm wears down as he gives in to the perks of fame and loyalty. He is a sympathetic, flawed and confused character. But even as Goebbels and Zoller eschew Expressionist conventions, the villain, Hans "The Jew Hunter" Landa (Christoph Waltz), simultaneously represents Goebbels' vision and that of the Expressionists. His search and massacre of all Jews dovetails with Hitler's plan for Germany, though he hunts Jews not out of hatred, but for the challenge. He sees the Jews as rats, but his condescension is coupled with admiration. To him, it is an accurate description of their ability to survive and propagate in the face of genocide. He is evil, but in his eyes, his crimes are a means of applying order to a meaningless and absurd world, and a way of confirming his own existence and power.

Of course, with a slight shift of perspective, the Basterds could be viewed in a similar light. They hunt, label, stereotype and butcher indiscriminately. But because their slaughter is directed toward an enemy founded on genocidal tactics, their actions are viewed as just desserts instead of with shock and disgust. It is particularly fitting how the Basterds mark their survivors with a Swastika carved into their forehead. Just like the Jews, who they tattooed in the camps, the Nazis must wear a mark announcing their identities for the rest of their lives.

The film initially moves at a glacial pace, opting for muted dialogue rather than elaborate whiz-bang fight sequences. Those who come in expecting nonstop Nazi-killin' might be dismayed (never fear: There is adequate Nazi-killin', though not as much as the trailer would suggest), but if you're willing to sit through 140 minutes of setup, the finale will reward your patience.

It's appropriate that a film about films would end with a premiere, and Tarantino finally entwines all the narrative elements to create a spectacle of chaos and destruction. The slow build contributes to the potency of the fifth and final act. Without giving too much away, the scene ends with a ghostly image of a face projected onto a plume of smoke. Wonderfully chilling and cinematic, it justifies the wait. 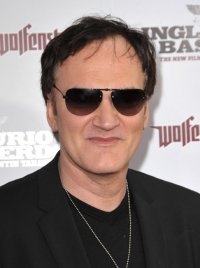 Keep this man away from your children and cameras.

Mix one part Kill Bill, one part Saving Private Ryan, one part Quentin Tarantino's smugness, one part all those oo-rah! war movies your grandfather watched, and what do you get? Inglourious Basterds, the latest pastiche of scenes from better movies, directed by everyone's (least) favorite foot-fetishist "auteur." Tarantino has no common style, recurring themes or insights into the human condition; Pulp Fiction, while decent, sent him down the yellow brick road to Hackland, the magical place where directors stop making films and start making homages or rip-offs (surely a distinction determined purely by their Cannes cred).

It's no different here; QT (how precious) spends so much time servicing Sergio Leone, David Lean and Jean-Luc Godard he must use back issues of Cahiers du cinéma for kneepads. Two and a half hours of this shit must be hard on QT's jaw, but it's harder still on the viewer. Unfortunately, QT isn't content to be alone on the wrong side of the glory hole; everyone from Brad Pitt to Michael Fassbender (who the fuck is Michael Fassbender?) to Cloris Fucking Leachman lines up to open wide, close their eyes and desperately wish their agents had found them better roles.