With the Crank franchise, Neveldine/Taylor proved they can best even Uwe Boll at making high-octane videogame movies. All you need is a shit-ton of cheap digital cameras, Google Maps, a Prt Scr button -- and, voila! With Gamer, the dynamic duo tackles its favorite subject in the most direct manner yet, but can massive amounts of post-production and Dexter's charming personality propel a film to greatness despite a fairly retarded concept?

Easy-mode filmmaking for a hard-mode audience

Gather 'round, males aged 18 to 25! Your cavalcade of gratuitous violence -- gratuitous everything, really -- is here in the form of Gamer, the latest mainstream attempt to captivate the minds of agoraphobic, couch-ridden nerds. It's destined to succeed financially with such a bombastic helping of breasts and gore. Gamer is the kind of movie so hell-bent on pleasing its demographic that it sacrifices any sense of moral decency to do so.

Gamer tells the forgettable tale of John Tillman, a death row inmate forced to act as an avatar in a real-life video game set in a warzone. His stage name is Kable (with a K!), and he abhors violence, despite the fact that it is all of which he seems capable. Wrongly convicted, he seeks to escape and reunite with his wife, also an avatar -- for some sort of PlayStation-Home-like sex emporium. Kable is played by Gerard Butler, best known as the guy who yells a lot from 300. He does not yell as much this time around, but he is still certainly fond of tensing up his facial muscles. The role of his arch-nemesis Ken Castle, the infinitely wealthy designer of the video game, is utterly hammed to hell by Michael C. Hall, who appears compelled to channel the spirit of Foghorn Leghorn. He gallivants around in such a thoroughly undiabolical fashion that he feels more like a shifty car salesman than an evil billionaire.

The film carries a strange spattering of talented actors relegated to meaningless roles. The immortal John de Lancie appears for about thirty seconds to participate in some vapid dialogue with Kyra Sedgwick, who shows up a few times to contribute an unwanted opinion. John Leguizamo is apparently there to twitch a lot and provide an emotional connection for Kable, but all I can really remember about his appearance is his bad teeth. Instead of providing depth to any of these characters, the acting weight is thrust upon the shoulders of master thespian Ludacris, who intermittently professes words of wisdom for our heroes. Note to casting directors everywhere: A man with one name does not have wise words to spare unless he's been dead for two or more millennia. 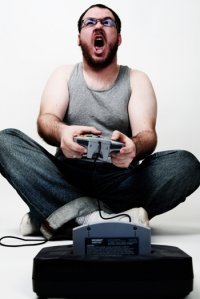 One bearded manchild, one Nintendo 64, two cases of Mountain Dew and 26 bags of Cheetos make for a riveting blockbuster!The action scenes recall Black Hawk Down, without the emotion, coherence and impact. Peoples' heads explode, entrails fly and limbs whirl about with great frenzy, while Kable occasionally puts on a sad, but TENSE, grimace towards such a senseless exhibition. These brief reprieves of remorse are quickly drowned out by the blaring sounds of bullets penetrating flesh while the audience is serenaded with industrial rock. (Apparently, someone in the hierarchy of a production studio decided the best way to appeal to the video-game generation was a 95-minute music video set to a 14-year-old Marilyn Manson song.) The camera serves these frantic scenes with the same impatient fervor, shaking about wildly but not enough to let us miss some random guy's foot blowing up. The screen also frequently "glitches" out, showing static and computer-y stuff, because, after all, it is a video game!

It is an understatement to say that Gamer is an exercise in demographic appeasement. It is desperately prostituting itself to every 15-year-old boy who sits in his house spouting racist insults on his headset to some faceless opponent. At the beginning of the movie, a player actually teabags his fallen foe. Soon after this first of many interchangable battle scenes, we are greeted with some of the most excessive and unerotic nudity I have had the displeasure of viewing. If I take great offense to anything in Gamer, it is breasts not being represented fairly. It is the kind of filmed nudity you would expect from a 13-year-old who just discovered the Internet and his right hand.

At the same time, though, the movie seems driven to alienate the very audience it seeks. There is the player who controls Kable, a spoiled, misogynistic 17-year-old so ensconced in the virtual world he has no real friends. Then there is the morbidly obese controller of Kable's wife, portrayed eating syrup-saturated pancakes and masturbating furiously to his subject's interactions. Paradoxically, it is a movie about how cool video games are, and how everyone who plays them is socially deviant. It seems the directors, who sacrificed first names for a forward slash when they sold their soul to Hollywood, would rather not have anyone enjoy their movie.

Gamer is a science-fiction story being suffocated by shock-value violence. It vilifies the exploitation of murder, then proceeds to show you how awesome it is. The most intellectual character, incidentally, turns out to be Ludacris, who decries this modern form of entertainment and says it would eventually lead to slavery. You see, the technology that controls the avatars could be used to subdue a substantial portion of the population without resistance; our villainous Huckleberry Hound could control the world.

It is not the worst premise, and I was intrigued for about three minutes...until I was treated to a scene in which Kable's scantily clad wife is wooed by a rapist --

Put simply, if you're the kind of person who would like Gamer you're not reading this, either because you can't read good or your attention span can't suffer 875 words. On the other hand, if your house is devoid of Mountain Dew and Cheetos, if you can remember when Marilyn Manson was popular, and if your idea of a perfect Friday night does not consist of you teabagging fallen sprites and spamming "pull your pants up u just got raped" ad nauseam...well, District 9's still playing. 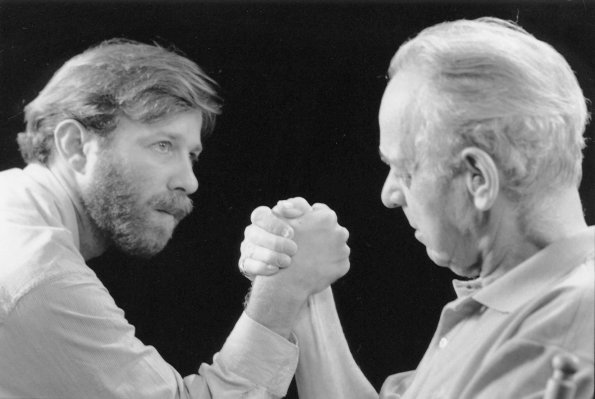 I have seen neither Crank nor Crank: High Voltage; thus, I came into Gamer uneducated in Neveldine/Taylor's particular brand of cinema. I have heard of their excesses -- Jason Statham clamping jumper cables to his tongue to prolong his murderous revenge, Statham half-raping Amy Smart to the delight of onlooking tourists, and the piles of broken cameras used to achieve those difficult shots -- and as such my expectations for Gamer were set reasonably high. I anticipated blood, senseless murder and general anarchy. What I got was, I think, a relatively sedate and mature deconstruction of action movies in general.

The film starts out with a few Slayers missions that are oddly affecting when set to the strains of Marilyn Manson's stirring anthems. The opening sequence features people blowing each other to shreds before running up to the corpses and teabagging them à la Halo. Strangely though, this affectation actually made me sit back and consider the insanity of what was being presented rather than simply laughing. The teabagging is even more pathetic than it is in video games because the film uncannily deflates the underdeveloped humor of teens via grown-ass men. These men and women are transformed into disposable, unimportant puppets, which makes the hyperactive action sequences strikingly hard to watch. And this is where the intelligence of Gamer lies. 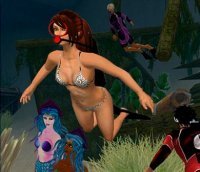 Gamer depicts Second Life taken to its logical extreme...with 100% fewer ball gags.Just before the film's climax there is an extremely clever sequence: A dance number! Yes, the final, operatic fistfight plays out just after a dance number. As the puppet-like dance moves end, the music continues into a sequence filled with punches and broken ankles, casting a bizarrely self-reflexive light on the proceedings. Neveldine/Taylor realize that a fight sequence isn't particularly different from a tightly choreographed dance, and here's the filmic evidence to prove it. In doing so, they tear down the artifice of the experience, examining genre tropes in a manner that renders Gamer just as much of a film about films as Inglourious Basterds was -- maybe an even better one, because Neveldine/Taylor don't waste time on silly things like dialogue.

Furthermore, Gamer dares to explore political satire, a concession few other movies of its ilk make. As the evolution of gaming brings us photorealistic carnage and, with the Wii, inches toward virtual reality, Neveldine/Taylor are stern and unblinking when they ask the audience, "Is this where we're headed?"

It's rare for a genre film to dissect its own conventions -- rarer still to possess such an incisive political message -- but that's why Gamer has surely secured its position in the annals of great films, an insightful and clever treatise on the trajectory of entertainment in the near future, as well as a sure stride forward for Neveldine/Taylor --

Or maybe it's just a terrible movie about shit blowing up.