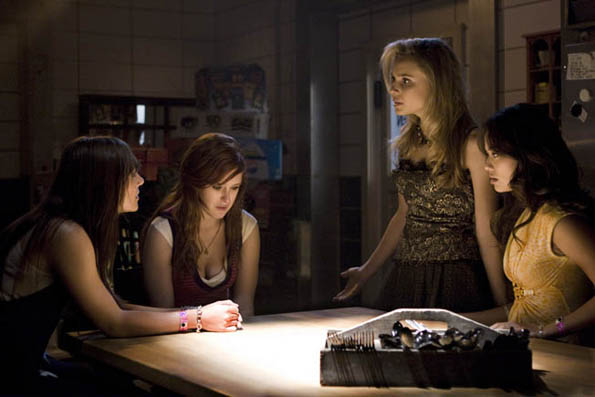 The girls of Theta Pi struggle to comprehend their algebra homework.

I found my thrill on...Sorority Row

I was really expecting to hate this.

I had visions of my own vitriol manifesting itself as a kind of bubbling green ooze and spewing out of every orifice onto the page. Au contraire, I actually had une blaste.

Sure, it offers nothing new on the storytelling front and it's predictable to a fault, but I got swept along by it and I'm going to tell you why. In fact, I'm going to make a bold statement; Sorority Row is exactly the kind of trashy exploitation film that Quentin Tarantino has sought to emulate throughout his career, but with none of his pretensions.

Stop me if you've heard this one: Six sorority sisters accidentally murder one of their own during a ridiculously elaborate prank (whoopsies!) and make only the barest of efforts to cover it up, only to be stalked by a mysterious killer who favors a ludicrous weapon. Sound familiar? That's because it's painfully unoriginal, which is its biggest shortfall -- a shortfall, might I add, that never stops it from being bloody good fun.

Sorority Row manages to be visually arresting thanks to cinematographer Ken Seng and some inventively violent set-pieces that make good use of a pimped-out tire iron, which has to be seen to be believed. It even has a pretty damned good original score to keep things rolling along nicely, and the script is full of genuine wit and laugh-out-loud comedy, even when it lacks real surprises.

There are some moments of pointless repetition, where the admittedly thin plot is still being explained to us almost an hour into the movie, but pure cinematic zest and a swift pace keep it from being bogged down too much.

With a sly and dark sense of humour that keeps its audience smiling and a running time of 101 minutes, you can be sure that Sorority Row doesn't outstay its welcome.