Remembering 9/11 with the Bradford Exchange

The date was September 11, 2001. Jennifer Lopez was heating up the music charts, The Musketeer was number one at the box office, and homicidal religious fanatics were flying planes into skyscrapers. Needless to say, things were crazy.

Thousands lost their lives in a series of horrific terrorist attacks that set in motion a decade's worth of war and all the carnage and suffering that brings. The world changed dramatically. Thankfully, things are way better now, and we can look back on that terrible day as an opportunity. That's what Bradford Exchange is doing. Without that rascal Osama bin Laden and his howling commandos, we wouldn't have these terrific products to buy. 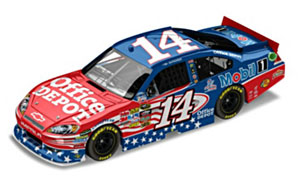 We all react to tragedy in different ways. Some of us mourn and honor the dead with song, moving eulogies or sacrifice, others paint tributes on miniature race cars festooned with the logos of our favorite corporate sponsors. To be fair, I think calling this a 9/11 Tribute is a bit misleading. True, it has patriotic colors, but so do a lot of things that have nothing to do with 9/11, such as paper plates, napkins and my underwear. If you're attempting to profit from a tragedy, there's really no need for artistic restraint. 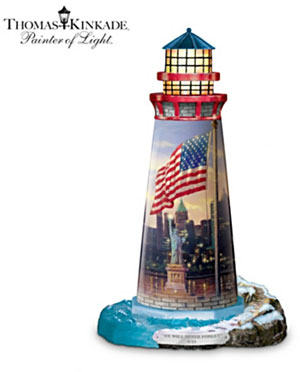 Of course that big, drunk, public-urinating oaf Thomas Kinkade would have to throw his two-chimneyed hat into the 9/11 exploitation ring. Behold, the Painter of Light's thoughtful tribute to a catastrophic event: One of his old paintings plastered on the side of a shabby lighthouse sculpture. Way to phone it in. With his relentless and senseless product licensing, Thomas Kinkade is basically what would happen if George Lucas had been raised in an attic by an abusive floral-print vest. 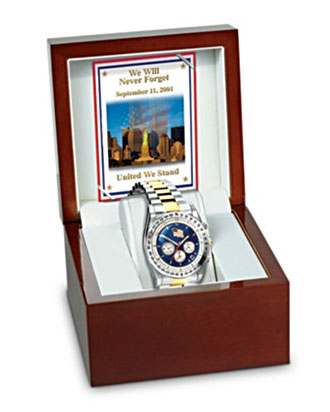 Twice a day, at 9:11 am and 9:11 pm, this watch plays the entirety of "Courtesy of the Red White and Blue" by country music meathead Toby Keith. Not since the Slick Willy backwards-running watch has a timepiece so captivated a nation. Whenever somebody asks you for the time, you could remind them of that fateful day when 3,000 people got murdered. You're so much fun. People like you! 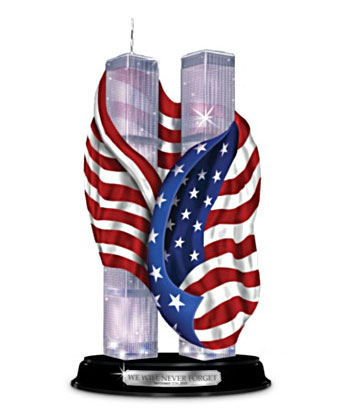 Here we see the Twin Towers in better days, wearing the American flag like a fat hairy man wears a towel in the locker room. Perhaps this is like one of those creepy anatomically correct fake babies the Bradford Exchange sells, so the flag is there to cover up the naughty bits. 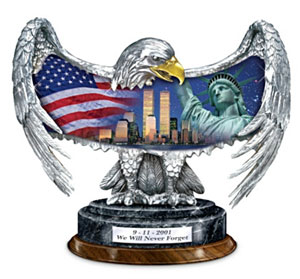 You can't really mention the Bradford Exchange without a garish eagle swooping in to steal the scene. This particular eagle sports some sweet tats: The American flag, the Twin Towers in all their glory, and Lady Liberty herself. If you ask me, I'm a bit sick of the Eagle's drama queen behavior. Can't we have one national tragedy without this dumb bird showing up and crying its eyes out? We can do that ourselves, bird. All you really care about anyway is stealing fish from more industrious avians and feasting on garbage. Some national symbol you are. 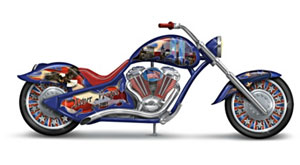 This is it. This is where they finally cast those pesky reservations aside and went for it. They put the Twin Towers' eerie ghosts on the side of an ugly candy-colored motorcycle figurine. The lack of thought and understanding here is so staggering it's almost quaint and lovable, like when Chinese bootleggers put Obama's face on a backpack underneath the Pokemon logo. It's adorable because they have no idea what they're doing and deep down inside everybody loves unauthorized merchandise. Come to think of it, the Bradford Exchange being a giant front for some crazy Chinese company with an extremely poor understanding of Americana would make a ton of sense and explain the astonishing absurdity of their entire product line. Let's go with that. Mystery solved!