There's a Brainiac. He's not THE Brainiac. However, he's one aspect of Brainiac. Or maybe there's supposed to be a different Brainiac in every universe and they're all cosmically connected, presumably via their brains. Either way, I think this particular Brainiac is the boss Brainiac. 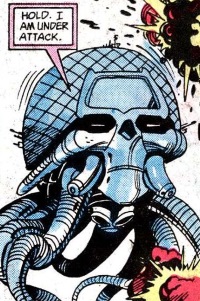 Pictured: My brain.Superman - the real Superman - finds himself in a whole other dimension, a dimension that exists outside of dimensions. He's looking for the Brainiac from his universe in here. Instead, he runs into this not-Brainiac Brainiac. the boss Brainiac. This Brainiac taunts Superman and tells him that in this non-dimension dimension there is another Metropolis. Not Superman's real Metropolis, but another one.

There's also a lovely collage of a bunch of Supermen from other dimensions who died in this boss dimension, but that's not important. I think.

The boss Brainiac somehow captures Superman. It's not really clear how this happens, but while Superman is chained up he grows some five o' clock shadow and yells a lot so I guess the writer and artist were just really excited to skip right to that scene.

Superman escapes and sees there's not just one Metropolis in this dimension, but many Metropolises from many dimensions in this dimension. And a bunch of Brainiacs too. These Metropolises are being held in city-sized bubble prisons and watched over by another Brainiac, who is serving the main Brainiac (not Superman's Brainiac, the lead Brainiac who captured and taunted Superman). Superman just wants to get back to his Metropolis and punch his Brainiac. Who can blame him?

Brainiac (the big boss one) has other plans. You know how all those Metropolises are trapped under domes, sorta like Under The Dome? He's going to open the domes for no good reason.

Everyone in those domes will fight one another for no good reason. Only one city can live, sorta like the Hunger Games.

Reading the first issue of this event made me feel slightly puzzled then wholly uninterested in a way that I haven't felt since I saw the promotional materials for movies like Batman vs Superman or Suicide Squad. Instead of stupidly amazing scenes like fifty Batmen punching one another in a vortex created by fifty Flashes this crossover event treats us to isolated locations with a handful of people standing around being angsty.

Wait, I forgot to mention there's a Doomsday serum. Doomsday sounds bad. Serum sounds good. If you have a flu and you take something called a Doomsday serum I'd imagine there's a 50/50 chance everything will either go real right or real wrong.

Naturally, this Convergence storyline is an attempt to make the DC universe less confusing. The last time the company tried to make things simple with a big event they created the New 52, which spawned new continuities, erased some old ones, kept some other old continuities in place, and arbitrarily mashed random things from different timelines together. For some reason this didn't result in clear storylines that new readers wanted to follow.

This time things will be different. Easier to understand. See, when Convergence is over the "New 52" label will be gone. But most of the New 52 continuity will stay. Except the parts that are gone. Also, there will be 24 new series starting with number 1 issues, some of which build on prior stories. Also, these will launch alongside 25 existing series with untouched storylines.

So where does that leave the theoretical new reader? If you want to read a DC comic about a man or woman punching villains where should you start?