Looper; Won't Back Down; Hotel Transylvania; Killing Them Softly

EXPECTATIONS: The mere fact that Hotel Transylvania is a product of Adam Sandler's Happy Madison Factory fills me with dread. Given that it's co-written by Robert Smigel and stars most of the Grown Ups crew, I can't help but think Sandler and Co. finally discovered that if they made a cartoon they wouldn't even have to wear pants to work. My only hope for this film being at all tolerable is that it marks the directorial debut of animator supreme Genndy Tartakovsky.*

REALITY: Boy, sometimes I really do hate it when I'm right. Hotel Transylvania is the very definition of a mixed bag. The jokes are tired and the plot is boilerplate pap, but for every lame gag involving werewolf pee, there is a wonderful bit of animation to offset it. There are a few interesting things going on under the surface, but for the most part this film is little more than an excuse for Adam Sandler to throw a cartoon party that we all have to sit and watch.

After losing his wife, Count Dracula (Sandler) is forced to raise his daughter Mavis (Selena Gomez) on his own. In order to protect her from the evil, scaaary humans, Dracula builds an enormous castle as a refuge for all the monsters of the world. On Mavis' 118th birthday, Dracula brings the whole gang back together to celebrate: The Wolf Man (Steve Buscemi), Frankenstein (Kevin James), The Invisible Man (David Spade), and The Mummy (CeeLo Green). The party's about to start when suddenly a monster appears; a scruffy backpacking human named Jonathan (Andy Samberg). 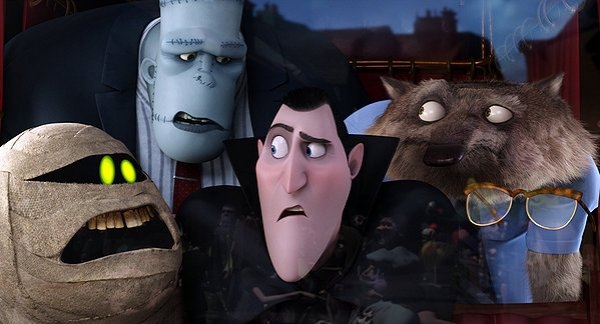 The film's plot takes a page or two from the Monsters, Inc. playbook, and throws in three or four dashes of The Munsters for good measure, so know that what you're getting is a thoroughly predictable story. Actually, if you've ever gotten really high and stared at a box of Count Chocula for ninety minutes, you've basically seen Hotel Transylvania.

What I find interesting about the film - in fact, the only thing keeping me interested as I watched it - is the way the film makes use of its cast. Adam Sandler and his company of stooges have been critical punching bags for a while now, so it's no surprise that they're back together for what amounts to an easy paycheck. But the film intentionally paints Dracula and his crew as a bunch of old-timers. At this point in their lives, they're middle-aged dads who have forgotten what the word 'fun' is all about. It takes a young pup who still has a zest for life to get their party started again, as it were.

Similarly, the presence of Andy Samberg brings a much-needed energy to what would otherwise be a bunch of old comedians standing around failing at telling jokes. He plays up the Guy Dude-Bro voice to an almost excruciating level, but that's only so he'll stand out in a cast of 50-year-olds who never stopped trying to sound like they're twenty-five. Granted, Samberg himself just entered the pantheon of 'SNL Has-Beens', but compared to Sandler and Spade he's the hip, cool, it-guy of the now generation. 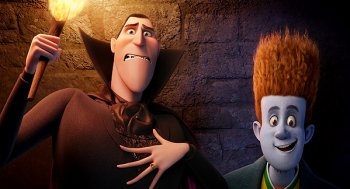 Oh no! Hijinks!I would almost say this is a clever way for Sandler to symbolically pass the torch to a younger generation, but this film is less of a torch-passing ceremony and more of a way for Sandler to welcome Samberg into his merry band of idiots. If you think I'm kidding, check out the cast listing for the upcoming Grown Ups sequel.

In the film's favor, it does have an interesting thing or two to say about humans and their relation to monsters. Late in the film, Dracula and Co. encounter a monster festival where they discover that modern nerd culture has spawned an intense love for all things monstrous. What was once a virulent mob of townsfolk carrying pitchforks and torches has bizarrely transformed into a pack of chubby neckbeards wearing plastic fangs and screaming "I'm Dracula! Blah!" The journey that humanity took to get from point A to point B in this scenario is a long and fascinating one that has already been explored more effectively in a number of films (including two versions of Fright Night), but given the target audience, jumping straight from angry mob to horror nerds seems like the right choice.

It's rare when I decide to write off an animated film as 'strictly for kids,' but it's probably safe to say that the closer you are to your pre-teen years, the more you'll get out of Hotel Transylvania. Most of the funniest gags come from Tartakovsky's bonkers animation design rather than Robert Smigel & Peter Baynham's script, and your tolerance for the musical stylings of Andy Samberg and an autotuned Kevin James may vary.

MINORITY REPORT: This is the Scooby Doo version of Dracula. It is the Dracula that came to be a joke after Universal forced all of their monster properties into single films and Hammer continually found new ways to kill and revive him. This is the Dracula who does the Monster Mash and is best friends with Frankenstein's monster, who he calls Frankie! This is not the character we think of as a classic of literature and cinema, but rather the character that a generation of children has seen parodied for so long that they no longer have any idea what potential is really there. Even comedy potential, which Dracula seems to show more of than Adam Sandler these days. - Ian "Professor Clumsy" Maddison