EXPECTATIONS: He's the boss, he's the king, but above everything he's the most tip-top Top Cat. So the song goes and I'd generally be inclined to agree, but somehow Top Cat: The Movie just doesn't look right. Rather than thinking "Hooray, Top Cat is back" I'm thinking "What the hell, someone's trying to bring back Top Cat?"

REALITY: Top Cat: The Movie is an excruciatingly painful experience that I wouldn't wish on my worst enemy. It saddens me deeply to think that this is what can pass for cinema in this age, seeing as the whole thing feels like a budget computer game for kids with all the actual gameplay cut out. Every gag falls flat, even with the kids in the audience -- who would all much rather be watching Madagascar 3, I'm sure. Probably because this film ends with a prison rape joke. 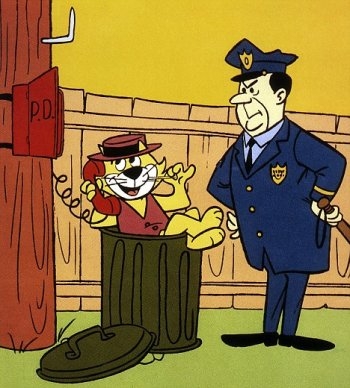 Oh good, it's the real Top Cat.Top Cat and his gang live a charmed life in an alleyway in New York City under the watchful eye of Officer Dibble. One day, Dibble breaks the news to the gang that he is in the running for Chief of Police, only to be pipped to the post by dirty-dealing Lou Strickland, who replaces the entire force with robots and has Top Cat thrown into Dog Jail because the Cat Jail is full. Now Top Cat must escape, reunite with his gang and overthrow Strickland's fascist regime. It's okay, kids. He gets raped at the end.

The whole story could easily be told in about 20 minutes, so there's absolutely no reason for this to be a feature film. Every scene feels like it is taking place between very simple puzzle-solving scenarios. Oh no, a locked gate. What shall we do, Top Cat? I know, we'll use these bananas to lure a giant gorilla out of the zoo to knock the gate down. Puzzle solved!

The animation is of an unacceptably low quality. These two-dimensional characters move through three-dimensional environments, presumably to allow for easier camera movements. Unfortunately, it all feels - yep - like a computer game. Everything is so floaty as the characters move in and out of the screen: They're moving forward but they're also floating backward as the background moves around them. It doesn't help that everything is so ugly, either. Every background is just a mess of slightly different coloured lumps; animated elements appear and disappear at random; and every animated character simply flips itself when turning around, rather than being made to look like they have two individual sides. I've never seen New York City and its denizens depicted in such an eye-catching array of grey and brown blobs.

The sound design is possibly the worst element on display here (other than the script, obviously). Every exterior scene is presented in a constant din and drone of traffic noise and wind. You know how in computer games when the environment is just full of sound effects all playing at once and it leads to a really odd ambience? Top Cat: The Movie employs that exact technique to ear-bursting effect. Every dialogue scene is drowned out by ceaseless traffic and car horns. I don't care how realistic you think it is, it doesn't sound cinematic to overplay everything with the sounds of a Saturday night in Birmingham city centre, especially when characters are trying to have a conversation. 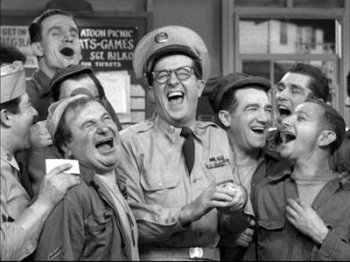 Oh good, it's the REAL real Top Cat.Considering that the story revolves around the dangers of replacing humans with soulless computers, it is ironic just how soulless and computerised the whole film feels. Considering this is a Mexican production based on an American cartoon from the 1960s, which in turn was based on an American sitcom from the 1950s (The Phil Silvers Show), you'd think that the filmmakers would be all in favour of modernisation. The fact of the matter is, this film rejects even the invention of the mobile phone as an advancement in technology and presents almost everything that we consider an advancement in the modern world as being fundamentally evil and wrong and then contradicts that in its aesthetic, which promotes the laziest sense of "let the computer do the work."

So surely there's some charm? Something that redeems this film? No, there isn't. The voice actors are the only ones who manage to come out unscathed by simply sounding like close approximations of the original cast members, but the lines they are forced to speak are horrific. In one particularly baffling moment, a character stops to think about his plan, the screen fades to black and it stays that way for a short while. "Oh, this must be that eclipse they've been talking about on the news, it'll be over in a few seconds." Fade back in. That's it. That's the joke. I say "joke", but jokes normally have punchlines and this feels more like someone trying to justify a fade to black that probably led to "Please Insert Floppy Disk 2" at one time. Every moment in the film feels much the same.

It makes me sad to think that this is what is becoming of our beloved artform. Cinema is now a rubbish bin to throw your unfinished video game projects into when you realise they're not working, or to expose young children to the concept of prison rape nice and early.

MINORITY REPORT: Sometimes I hate free speech and this age of affordable technology, in which any sex offender with an iMac can remake Puss in Boots using Illustrator. In fact, I sometimes wish we lived under the totalitarian rule of the moon Nazis, which brings us to... - Sean "Keanu Grieves" Hanson