It's a scant weekend of releases this week, what with the industry recoiling in terror at the prospect of competing with The Avengers, and so we bring you only one review -of Bully, a documentary about - you guessed it - bullying.

EXPECTATIONS: The Weinstein Company publicly fought the MPAA for weeks trying to get Bully a PG-13 rating. "Young people across America need to see this film, so they should at least be able to get in," is the line of reasoning. Because if there's any film kids are going to flock to in droves on Avengers Weekend, it's a documentary about kids being bullied. Harvey Weinstein is a genius.

REALITY: Most children are assholes. Put twenty children in a room together, and they'll inevitably figure out which child is different and tell it to their face until that child breaks down into a puddle of tears and shame. William Golding's novel Lord of the Flies tells that very story, swapping out 'classroom' for 'desert island' and 'teacher's permission' for 'conch shell.' Much like Golding's novel, the kids with the power are usually the same ones willing to smash someone's face with it. It's important to keep that power dynamic in mind with a film like Bully, a powerful yet sometimes seemingly helpless documentary about the kids who desperately wish the conch shell was their own.


Bully tells the stories of five students from all across America and their experiences with bullying. The film opens on the family of Tyler Long, a 17-year-old who killed himself because of bullies. They, along with the parents of 11-year-old Ty Smalley, take up the cause to speak out against bullying and the school administrations that turn a blind eye. Elsewhere, the film follows three kids in their struggle against bullies: 12-year-old Alex Libby endures regular beatings on his way to and from school, 16-year-old Kelby Johnson deals with being completely ostracized after coming out as a lesbian, and 14-year-old Ja'Meya Jackson faces 22 counts of armed kidnapping after brandishing a gun against bullies on a school bus.

Despite its title, Bully's true focus is on the victims. We don't need to see the bullies to know what they look like; they look less like Scut Farkus and more like you and me, and the effect of their actions is vivid enough. The most direct result shown is in the aftermath of two suicides. Tyler's family still struggles to pick up the pieces, and while they've lost a son, they've gained a sense of conviction to fight bullying however they can. We're never told the extent of the bullying that led to Tyler and Ty's deaths, but it's not hard to imagine given what we see Alex going through on a daily basis. He is constantly punched in the arm and called 'fish-face'; he's sat on and yelled at on the school bus. Alex is beaten on with such regularity that he mistakes the bullying for good-natured horseplay, and when his mother confronts him with this he replies, "What friends does that leave me with?" 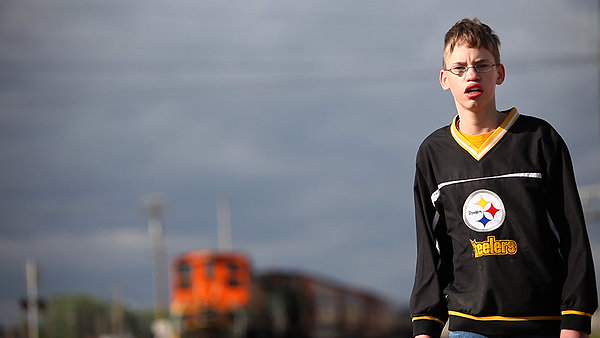 It's really just a remake of Stand by Me.

Of all the kids featured in the film, Kelby appears the most well-adjusted, and she seems to take her status as a pariah in stride. Granted, we hear her stories of being forced off of sports teams and run down with minivans long after the fact, but her days of being bullied are (hopefully) coming to an end, and we see that she's found a circle of friends to support her every step of the way. That's a luxury sorely missing from Alex's situation, and he's only just begun to enter the adolescent Hellscape known as High School.

Figures of authority are few and far between, and the only school administrator we really get to meet seems willfully ignorant of the bullying situation. "Boys will be boys," she tells Alex's parents when they confront her over the abuse he endures on the school bus. She tells them all she can do is put Alex on a different bus, but there's no guarantee that will solve the problem. This scene underlines the real problem at work here: Boys will be boys, but the teachers and principals simply aren't equipped to keep horseplay from snowballing into abuse. You can tell a kid to stop sitting on another kid's head, but that's not going to stop him from doing something else, something potentially more damaging. Besides, what kid hasn't told a teacher exactly what they wanted to hear just to get out of trouble? There may be zero tolerance, but as director Lee Hirsch portrays it, there's also zero shame and zero accountability.

At one point in the film, we meet a boy who knew Tyler Long. He admits that he was bullied as well, and that simply standing up for himself ended his problem right then and there. The film offers little in the way of a solution, and suggests that standing up to bullies is the only real option. School boards are portrayed as dismissive, if not entirely absent, and the authority figures we do meet act more like politicians than concerned parties.

While Hirsch opts to keep himself out of the narrative and focus on the kids, he leaves the film open-ended. Bully posits a problem and desperately searches for an answer. What is the answer to schoolyard bullying? New administrators? Better-informed teachers? Instituting a zero-tolerance policy on bullying is one way to go, but it's completely at odds with the "boys will be boys" sentiment; what happens when a teacher mistakes actual good-natured ribbing for abusive behavior? Constant monitoring may stop the problem, but it may also hamper the very social growth that kids go to public school for in the first place. Perhaps it's best that we not ask schools to solve this problem for us. Like the families of Tyler Long and Ty Smalley found out, if you want something done right, you'd better do it yourself.

MINORITY REPORT: Yeah yeah, bullying is bad. Now, Joe, if you're done writing your dumb review, can we please go and hide Vargo's car keys again and laugh at him as he looks for them and then just start kicking him in the ribs when he eventually finds them? It is Sunday after all. - Ian "Professor Clumsy" Maddison