Sound of My Voice

EXPECTATIONS: Two or three things I know about Sound of My Voice: It's a horror film about a cult and it's the freshman effort from Another Earth's Brit Marling. Oh, and it has an awesome poster. After last year's Martha Marcy May Marlene, which proved that a horror film can be simultaneously subtle and unnerving, and Another Earth, which established Marling as a burgeoning talent, I'm excited to see Sound of My Voice without a single trailer or plot synopsis to further whet my appetite.

REALITY: OK, so Sound of My Voice isn't really a horror film and, as I learned from the theater owner after the screening, it actually predates Another Earth. Criticizing Sound of My Voice is about as satisfying as beating a lame dog, but it's easy to see why it took longer to reach theaters: It's promising and interesting even if it's not very good.

In ten short-ish chapters (word on the street is Sound of My Voice was initially conceived as a web series), we follow lovers/aspiring journalists Peter (Christopher Denham) and Lorna (Nicole Vicius) as they seek to infiltrate a cult led by Klaus (Richard Wharton), who's either an old hippie or an ex-Nazi (maybe both), and Maggie (Brit Marling), a prophet type who claims to be from the year 2054. Despite their best efforts to remain objective, Peter and Lorna feel the tug of her sway because Maggie has tattoos and a goofy handshake. Thankfully, this plays better than it reads.

Marling and first-time director Zal Batmanglij make a great choice at the beginning of Sound of My Voice ... and then some increasingly bad ones.

Ever the optimist, I'll start with the good: After an intertitle with ONE in ominous block letters, Sound of My Voice cold opens with our protagonists, not yet introduced, consenting to be bound, blindfolded and driven to an undisclosed location, where they shower, shuffle to the basement in hospital gowns and use that goofy handshake to gain entrance to a lecture from Maggie - but not before a fellow cult member warns them: "The first night is the hardest." It's a sequence that's as sure-footed as it is tense and surreal.

These basement scenes - anchored by Marling's performance as a charismatic cult leader who's simultaneously exceedingly kind and acutely direct, an ailing prophet who needs blood transfusions, organic food and an oxygen mask - are the strength of a movie that falters whenever the characters go outside and send Sound of My Voice on a slow downhill slide to Suck City. 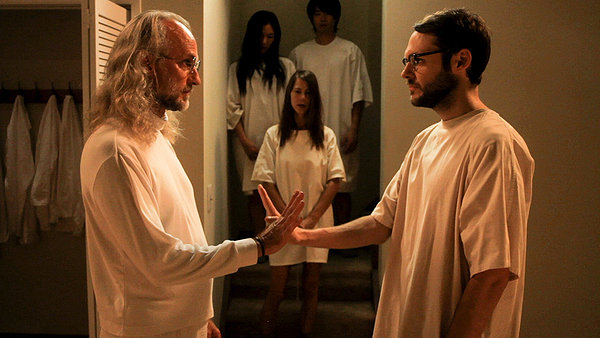 Batmanglij and Marling miss their first step fairly early on, in a montage flashback meant to fill Peter and Lorna's pasts. Over abstract snippets of home movies, Marling delivers painful narration that smacks of a freshman writer's stab at flash fiction inspired by Shawn Mullins' "Lullaby." Through the remainder of the film, Denham and Vicius work to outrun the artifice and limitations established by such wrong-headed character introductions. Worse, the character traits established by these intros are of little consequence: Peter may be the Dawkins-loving skeptic and Lorna the recovering addict who's a little more vulnerable to brainwashing tactics, but they shed these roles early on when the film hits its stride.

Such a role reversal might be a little more plausible in the hands of more experienced writers and actors, but their character arcs seem more like afterthoughts in a film that should be The Maggie Show, emphasizing two weak protagonists over Marling's genuinely compelling creation. I mean, when you have a character who's either a time traveler preparing the faithful few for an apocalyptic event or a con artist doing unspeakable things in a generic suburban basement, why would you focus on amateur-hour relationship drama between two self-absorbed twenty-somethings? Is that really what audiences want?

Peter and Lorna's relationship isn't the only aspect of Sound of My Voice that exceeds the filmmakers' grasp. Two other characters wander into the plot but are refused entrance to Maggie's basement of horrors: a narcoleptic child and ... well, I won't spoil it. But these two characters remain largely detached from everything until the third act, almost as if they were written solely to engender an ending.

From where I sit (high in a glass tower, stones in hand), making Maggie a supporting player in favor of a larger cast and two boring leads only works to crank the ambiguity. Unfortunately, ambiguity worked better in Another Earth (and Martha Marcy May Marlene, for that matter).

Those films are puzzles; Sound of My Voice is an all-black puzzle with half of the pieces missing, which maybe isn't as fun to assemble. And herein lies the fundamental problem: If I can explain both interpretations of the narrative and then provide a third explanation that makes those interpretations equally valid, the ambiguity was for naught. Despite these complaints, I'm giving Sound of My Voice a somewhat positive score for four reasons: 1) low-budget debuts are usually terrible, 2) they can't all be Following or Pi, 3) this film is as interesting as it is frustrating, and 4) those basement scenes are more than worth the price of admission.

MINORITY REPORT: I don't know if it's just the hype for The Dark Knight Rises getting into my brain, but I could swear you said the directer was called Zal Batmanglij. I must be going crazy. - Ian "Professor Clumsy" Maddison