The activity has turned paranormal for a third time and we are here to tell you about it! Also, there are adventures of Musketeers -three of them!- to recount, and bizarre attempts to turn humans into centipedes to be repulsed by.

EXPECTATIONS: Paranormal Activity 1-2 rank among the best and brightest found-footage films. The first shimmered with low-budget creativity, while the second, boosted by a bigger budget, unveiled some genuine surprises and amplified the action. (It should be noted that Ian "Professor Clumsy" Maddison, in all his joylessness, gave Paranormal Activity 2 a pitiful 20/50.) This time around, directors Henry Joost and Ariel Schulman (of last year's fantastic documentary Catfish) are bringing the series back to the '80s, and what's scarier than the '80s? With all this in mind, there's very little evidence that Paranormal Activity 3 will suck.

REALITY: Boy, I hate being wrong. While Paranormal Activity 3 may not suck as hard as acid-washed jeans, it's no leg-warmers either -- and if you get that analogy, prepare to be disappointed in this film's inattention to period detail. Then again, getting that analogy might push you out of this film's target demographic. 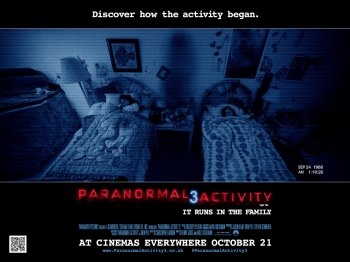 Footage that is neither present nor possible in the finished film.Instead of 1988, we get a bad cover version of 1988; one-off nods to Lite-Brite and the Flashdance look can't balance out the HD widescreen VHS cameras, the would-be stepdad's A&F outfits, his geeky assistant's post-Internet sense of irony or the complete and utter lack of '80s slang. Essentially, Paranormal Activity 3 gives us 2011 without cell phones, which is sort of like presenting The Flaming Lips' Dark Side of the Moon as Pink Floyd's.

Paranormal Activity 3 attempts to fill in the gaps of the Paranormal Activity mythology by sketching out the shared childhood of series staples Katie and Kristi, whose forgotten traumas are supposed to culminate in an incident oddly ignored in this installment. Instead, we get a bland domestic drama about single mom Julie (Lauren Bittner) and her videographer boyfriend Dennis (Christopher Nicholas Smith) -- rather convenient that he's a videographer, ain't it?

Each entry so far has been responsible for a gimmick: In the first film it was the bedroom cam, to which its sequel added ceiling-corner security cams. This time around we get an oscillating cam, which Dennis and his assistant fashion out of a camera (obviously) and a fan-base (get it?). At first, this is a remarkably clever mechanism of suspense; the audience is rapt as the camera pans slooooowly left and then right, with a wide pillar bisecting a panoramic view of the adjoined living room and kitchen. In theory, and occasionally in practice, this enables something to change in the unfilmed sector while the camera is pointed elsewhere, with suspense mounting during the 45 seconds or so it takes the camera to complete its pan. Unfortunately, those wunderkinds sharing the director's chair forgot to, y'know, make shit happen. Thirty minutes in, I'm stuck wondering why I've been staring at what amounts to a static image while the filmmakers rarely bother to follow through on the promise; one scare to nine fakeouts is a pitfully low shit-happening-to-shit-not-happening ratio. 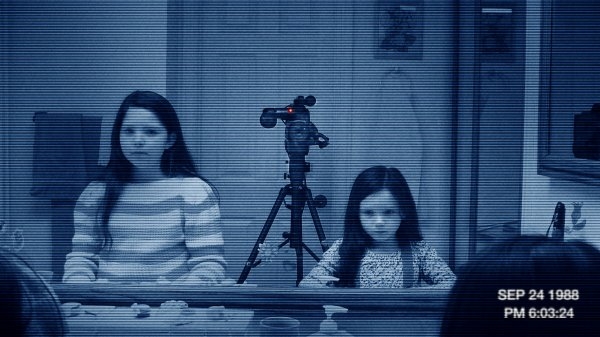 More footage that is neither present nor possible in the finished film.

This is a grave mistake for a Paranormal Activity movie; the formula, tried and true, is an engine for cheap scares and nothing else. If you go too long without shit happening, the audience has time to think, and other flaws begin to seep through the cracks. For instance, how has actress Katie Featherston grown backward through time, looking obviously older through each successive prequel? How do the filmmakers reconcile HD widescreen VHS footage with the SD fullscreen VHS footage that appears on Dennis's period-appropriate monitors? If Dennis is really reviewing this footage on a daily basis, how does he miss some obviously supernatural shit happening in full view of his cameras? How can this film accumulate more plot holes than the Saw series, in four fewer sequels? 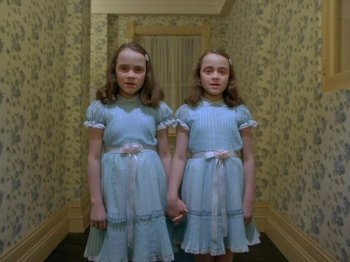 Why aren't you watching this instead?And what invisible editor is assembling this found footage? Furthermore, why would this editor cut away from an illuminating moment in which Dennis explains what's going on to show us more shit not happening? Does he get off on withholding information, or did he just fall asleep in the editing bay?

The artifice of documentary is essential to a film like this. While we (meaning the sane, rational members of the audience) know this is fiction, maintaining that illusion solidifies the scares and elevates a found-footage film to something approaching art. The genre as a whole still struggles to find reasons a character would keep a camera rolling instead of dropping shit to run, but this is the one major conceit audiences are willing to accept; any further breaks in the illusion just seem careless. Yet, in addition to the premise violations delineated so far, Paranormal Activity 3's advertising materials run contrary to the reality established by the film itself: A completely different take on the Bloody Mary scene finds its way into the trailer, and footage that would've been impossible for Dennis to capture, considering the absence of an above-the-bed cam in the finished product, yields its very poster art.

Maybe it's a testament to Joost and Schulman that beneath all of this -- the perforated plot, the looooong sequences of shit not happening, the flippant disregard for genre conventions and the lack of fidelity to the period in which it's set -- there's a film that's fitfully effective. Despite all of its flaws, Paranormal Activity 3 presents a group of likable characters and yields a handful of superb BOO! moments (about one every 20 minutes), but how can I recommend a movie that's more eager to bore and insult than it is to scare?

MINORITY REPORT: I liked the idea of Paranormal Activity, back when it first surfaced, I just never felt it was a cinematic one. It's a film best kept to discussion in hushed whispers on the quiet corners of the Internet. It should have had a clandestine video release, designed for people to show to their friends under the pretense of it being a real event. As soon as it became a successful franchise, the whole concept was shattered. - Ian "Professor Clumsy" Maddison

Final Destination V subverted expectations by establishing the usual elaborate death machinations before startling viewers with abrupt, unrelated kills. Paranormal Activity 3 does a similar kind of self-referential thing with fake-out jump scares, only in this case they're much more entertaining and memorable than the rest of the movie. I would have rather seen an entire film in which Paranormal Activity 3 mom Julie just kept jumping out from behind things while wearing a witch mask. I hope they keep that suggestion in mind for the next back-in-time prequel, featuring footage from a vintage reel-to-reel video recorder. Paranormal Activity 4: 4 Reel. - Andrew "Garbage Day" Miller