If you were hoping to see a film this week, I hope you like films about cancer, because everything else is crap. In the cancer corner, Joseph Gordon-Levitt and Seth Rogen star in 50/50. In non-cancer-related films, we have the Anna Faris-driven romantic comedy What's Your Number? and the Daniel Craig-led spook-fest Dream House.

EXPECTATIONS: Part of the "curse of the critic", if truly there is one, is having to weigh in on films for whose target audience you do not belong. As I enter the cinema alone to see What's Your Number? - which appears to be little more than another film that disguises the need to find a husband before you hit forty behind a mask of female empowerment - I notice that they are selling copies of The Hunger Games in the foyer and I start to wonder if I belong to an audience that has been forgotten by the Gods of cinema. Then I remember that last week I reviewed a film in which Jason Statham punches Clive Owen in the balls, and the balance of the universe is restored. 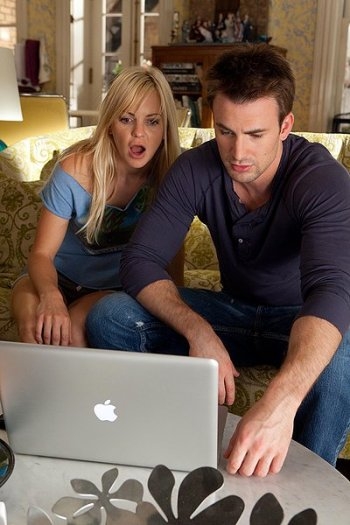 :OREALITY: Did you know women read magazines that tell them how to be women? Apparently this is so important to them that they take every word in these periodicals as gospel from which they must never deviate. That is the basis of the rather contrived What's Your Number?

Ally Darling (Anna Faris) reads an article in one of the aforementioned women's gospel magazines that states, in no uncertain terms, that if you have sex with twenty or more people, you will never get married. As ridiculous as that sounds, she takes it to heart and decides to have her neighbour Colin (Chris Evans) track down all twenty of her previous lovers in an effort to rekindle a relationship and find out if any of them are marriage material. You don't win any prizes for guessing where the real romance starts to appear, and you certainly won't win anything for predicting that it ends not only with a reassuring message about being yourself, but also with disconcerting lip-service toward proving that the gospel magazines were right in the first place.

Predictability and the double-standard are often the first two nails in the coffin of any romantic comedy, and they're usually followed by the suitably predictable third nail of not being funny. Thankfully, this film doesn't have too many problems in that regard. While there are plenty of scenes that will have you rolling your eyes instead of laughing, there is a decent lineup of genuinely funny moments performed by a cast that handles comedy well. The next nail is a dead cert though, because this is a film that doesn't really understand people very well.

In spite of the fact that she is unemployed after being fired by her finger-sniffing boss Joel McHale, Ally lives a life of relative luxury. She manages to acquire new outfits, eat take-away food every day and doggedly pursue her bizarre goal. At no point in the film does she ever worry about any kind of financial problem, even though the whole joblessness thing is hanging over her head. In fact, it is only ever mentioned as a joke. People who don't have jobs tend to have trouble paying for things, don't they? 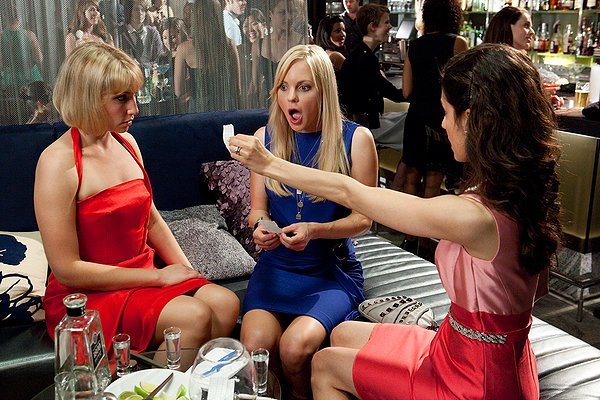 Thankfully, Ally and Colin are your typical artistic genius types. You know how every person in a movie is always some kind of creative savant? Well, Ally makes clay sculptures and Colin is a musician. By the end of the film, of course they realise they should pursue these talents as careers in order to pay the bills and have absolutely none of the obstacles that might impede a real person from doing so on a whim. The whole idea of making Ally an artist at all feels like a contrived afterthought. Maybe early test audiences didn't see her as someone to aspire toward. It's all about aspirations in these kinds of films. 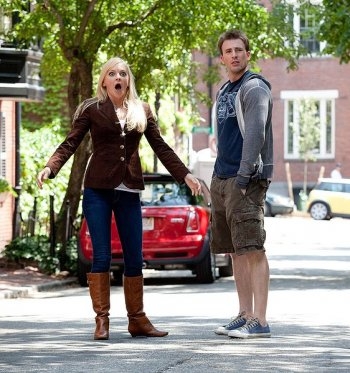 :OHere's another thing: If I were to walk into any populous building right now and shout "Hands up if you use Facebook or Twitter!" the show of hands would be overwhelming, if they weren't all ignoring me. We live in a world where social networking is widespread and immediate. So why is it that every time a film broaches these subjects it sounds like a confused old man trying to sound like he's down with the kids, throwing buzzwords that he overheard on the bus? "Hey kids, I bet you like the face books, right?"

I get the feeling that, during the writing of the script, one of the writers came running into the room, short of breath. "My God, I've just found out about these amazing new things that the plebes use called Facebook and Twitter, we should totally mention them in our movie to show that we're human!" Apparently the writers didn't actually know how to do that.

So, let's talk about clichés, shall we? Sometimes I think it would be fun to compile a list of clichés in films and explore how they became overused and why they were effective in the first place. Then I realise that films like What's Your Number? are busy doing that for me. It's all here: the soul mate who was under the heroine's nose all along; the epiphanous speech during the third-act wedding ceremony; the last-minute revelation that the otherwise perfect "rival suitor" is rude to waiters for no reason.

If your a fan of clichés or the kind of lewd behaviour designed to titillate middle-aged women without being so extreme as to offend them, then What's You're Number? is the film for you. If you're unlucky enough to be forced into watching this, then be ready for one singular treat. Something that I found quite refreshing when I saw it. That treat is Joel McHale's balls. "Oh look," I thought, "Those are Joel McHale's balls. How refreshing. I feel refreshed."