Sinister; Seven Psychopaths; Argo; The Perks of Being a Wallflower

It's a solid week of not-quite-masterpiece releases, with self-aware horror film Sinister; slightly disappointing crime comedy Seven Psychopaths; surprisingly good political thriller Argo; and rather charming high school drama The Perks of Being a Wallflower filling the lineup at cinemas.

EXPECTATIONS: Given that Berberian Sound Studio is my film of the year so far, I'd be surprised if Sinister took its similar ideas to such heights. Honestly, though, Sinister doesn't look half bad and it could be powerful if it carries its premise well.

REALITY: Does cinema lose its power if you don't look at it? If film is destroyed, do its images stop existing? These questions, among others, are at the heart of Sinister. Throw a pinch of Stephen King in the mix and you have a horror film that is very nearly great. So close is it to greatness, in fact, that it's absolutely galling to watch it run out of ideas before the end. 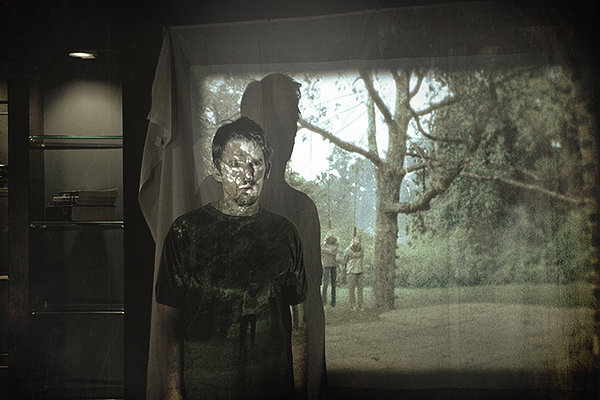 You're looking the wrong way.

True crime writer Ellison Oswalt (Ethan Hawke) moves his family into a new house (who was it that said all American horror is about bad real-estate decisions?) in hopes of tracking down a girl who has gone missing after her family was murdered. While shifting some boxes into the attic, he happens upon a box marked "home movies" with a film projector and a series of Super 8 films dating back to the 1960s. When he decides to view these films, he sees that they are all handheld footage of entire families being murdered in imaginative ways. He also begins to suspect that a supernatural power resides within the films themselves.

The scenes in which Oswalt scrutinises the footage are the film's most compelling. The way the sound design accentuates the silent footage, as the score changes abruptly and the projector whirrs incessantly, lends chilling atmosphere to these horrific images. As Oswalt watches, he often closes his eyes or turns away as particularly gruesome images appear. As he does so, the projector remains as a constant reminder that the film plays on. We see throats being cut in the reflections of his glasses while his eyes are closed, we see the room illuminated by massacres that he can't watch. The film plays on and the sound of the projector is ever-present to remind us that even if we're not looking, the scenes are still there, projected and reflected all over the damn room. 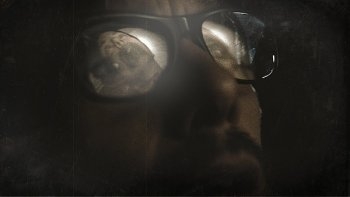 The 3-D films are getting realer everyday.Sometimes Sinister likes to imply that the films are looking back at Oswalt, even when he is not looking. It's all designed to creep people out about horror movies in general. Maybe the next time you watch your favourite horror, you'll bear this horror in mind while it plays out. In some ways, it's admirable for a film to martyr itself in this way in order to remind an audience that it's all about them. I don't think this will be anybody's all-time favourite, but it will probably enlighten them as to why their all-time favourites are their favourites in the first place.

The supernatural element comes into play as Oswalt discovers a mysterious figure in each film. People tired of pop scares might be pleased to find that the scares here are handled a little differently than usual. Yes, the figures jumps out with loud bangs in the soundtrack, but then the camera and characters stop and dwell upon what they are seeing, much as someone might freeze-frame any similar scene in a horror film to get a good look at whatever it is that's jumping out of the shadows to scare them.

Unfortunately, this cannot last. Toward the end of the second act, the film runs out of ideas and it abandons horror for comedy. They're so sure that you've predicted the ending by now (and believe me, you will have) that they put tension on the backburner and start piling on the jokes. It makes for a more effective genre-criticism than The Cabin in the Woods, in my lonely opinion, but it doesn't necessarily make for an effective horror film when everything gets wacky in the third act and your ending is basically a punchline.

There are a lot of interesting themes here, carried extremely well by the lead performance from Ethan Hawke, but it doesn't all work. A film about the power of horror films that isn't an especially powerful horror film in itself ends up falling sadly short of the mark. It's a real shame, because for that first hour it's absolutely cracking stuff. I'd still give it a whirl, if you're a horror fan.