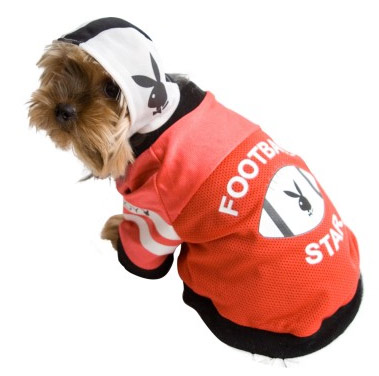 He'll kickoff any party this Halloween. The Football Star pet costume includes: A black and white top with the team emblem on the back. A matching soft football helmet is also included to complete your little quarterback's game day style! Guaranteed to bow-WOW your fellow canines this Halloween!

Dr. Thorpe: I'm dressing my dog up as a baffling mixed metaphor.

Zack: You can dress your other dog up as the IHOP astronaut.

Dr. Thorpe: Next year I'm gonna dress him up as an Aerosmith laundromat.

Zack: I still have my Microsoft lobster costume in the closet somewhere.

Dr. Thorpe: Even the dog is giving you a look like "this shit doesn't even make sense, may as well dress me as a Newsweek bassist."

Zack: We're probably just displaying our ignorance of Playboy products. There is probably a series of Playboy football-themed videos. You know, gauzy lenses, soft-jazz music, girls shaped like living anime figurines, and 45 minutes of a thin premise made slightly tolerable because of toplessness.

Dr. Thorpe: And I'm shocked, SHOCKED to see Playboy lend their iconic bunny logo to a piece of merchandise that is, to say the least, non-canon.

Zack: Once they released that Playboy video game where Hef was having sex and feeding himself and changing his own clothes you knew the empire had decided to ignore canon.

Zack: That sounds right. I think they're all finally over 20.