Caring for Your Hef

Thursday, Dec 30, 2010 by The Playboy Mansion Institute of Gerontology 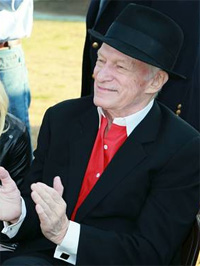 Your Hef may occasionally dress up as an undead Old West preacher; this is completely normal.Congratulations on your upcoming marriage to Hugh Hefner! This guide has been written to assist you in the slow transition from "attractive woman who is asked to entertain an old man during his three waking hours" to "attractive woman who must now stare down an 85 year-old penis until Father Time rewards her for six months spent watching reruns of Wagon Train."

With this change in lifestyle comes added responsibilities. While you will still be asked to pour champagne down your body at random intervals and participate in lingerie-themed parodies of real sports, becoming Mrs. Hef entails more than rifling through his wallet during his 5:00 - 10:00 P.M. nap so you can score coke from one of the Mansion's landscapers. Between binges, you'll also be responsible for the care and upkeep of America's Most Beloved Pornographer, the curious animal known simply as "Hef."

A consummate partygoer, Hef has not actually sat down for an actual prepared meal in over 60 years. Rather, over the decades, his body has grown accustomed to high-sodium morsels typically served at cocktail parties: cheese cubes, mini-quiches, caviar, and inappropriately discarded cigarette butts. As Hef's wife, you will not be responsible for the preparation or placement of the food, but you will be tasked with making sure that Hef does not hurt himself as he wanders from tray to tray while talking to dead celebrities he believes are actually there. Be warned: if Hef thinks he sees Dean Martin, he will produce a gun, and fire it if the mood strikes him.

Should this happen, gently rub your breasts against the Bunny Alarm located in every room of the Playboy Mansion, and several members of our Sexy Security Team will appear within minutes and tickle him into submissive state. Following this, Hef's 58-pound frame can easily be toted back to his sleep chamber by any able-bodied woman under 30. 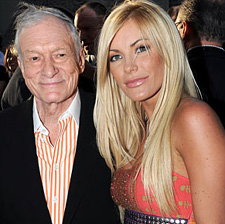 Money can't buy you love, but it can buy you whatever the hell this is.

You might have dealt with hordes of unruly seniors during your waitressing shifts at Hooters, but nothing can prepare you for old Hef! Perhaps the most important element of keeping your Hef clean as a whistle can be summed up in the following sentence: The smoking jacket does not come off. What most view as an iconic part of Hef's wardrobe is actually loose skin that has been gently tugged and dyed so Playboy's founder can wander through his mansion as God intended. Note: the cloth belt is an exposed section of Hef's small intestine, so refrain from touching while food is passing through it.

Every Tuesday, Hef goes in for "deep cleaning," where you will don a hazmat suit and assist your new husband in scrubbing what we refer to as "pipe stank" out of his many crevices. Once you've successfully removed the tobacco residue and mildew colonies from his person using several high pressure steam hoses, you'll have the rest of the afternoon free to desperately try to forget what you've just seen.