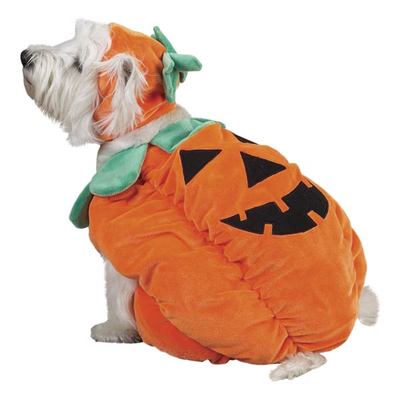 This cute pumpkin dog Halloween costume will drive your dogs out of their gourds!

Plant this costume in your pumpkin patch, and watch your dog grow!

Cap has Velcro chin strap for a secure fit.

Zack: Today's costume is the dog equivalent of those fat guy Halloween costumes. They're all based around a formless single garment. Costumes like "robed wizard" and "robed druid" and "mu-mued king."

Zack: Don't let your fat dog out in the yard in this one either or some mean kids might smash him with a baseball bat.

Dr. Thorpe: Yeah, this costume is just plain dangerous to dogs. In fact, look at the description: "Plant this costume in your pumpkin patch, and watch your dog grow!"

Dr. Thorpe: That doesn't even make sense as some kind of cute joke on any level, so I'm forced to assume they mean it literally.

Zack: This is the Halloween costume for owners that want to get rid of their dogs and don't want to be blamed.

Dr. Thorpe: "Oh, wow, I didn't mean to leave my dog out on the porch getting soggy and moldy till December, I thought it was a real pumpkin! Look how fat the little motherfucker is and everything!"

Zack: "Maybe if he would slim down I could squeeze him into the 'plus-sized maid' costume and this sort of thing wouldn't happen!"

Dr. Thorpe: "Oh shit, that reminds me, I dressed my son up like a vampire and my wife drove a stake through his heart, don't tell me we're gonna get in trouble for THAT, too!"

Zack: "The next thing you're going to tell me is that I can't just throw a cow head on top of my other dog, lock the doors, and milk all his fun well into the evening hours."

Dr. Thorpe: But seriously though, this dog is a fat little asshole. He also looks like he's taking a really mournful shit.

Zack: He had it coming. We warned him about eating all that poop. "Poop to live, don't poop to eat!" I said. He never listened.

Dr. Thorpe: Actually, I'm not quite sure this costume has a place for the poop to come out, so maybe it's just like a giant squishy diaper for really freewheelin' pet owners who just want to put something cute on their dog and forget to walk it until it's the size of a beach ball.

Zack: Then you set it on fire and get a twofer from the Halloween prank patrol. "Ahhhhh who put this burning pumpkin full of shit on my doorstep!"

Dr. Thorpe: "And who buried this dog in my pumpkin patch?"