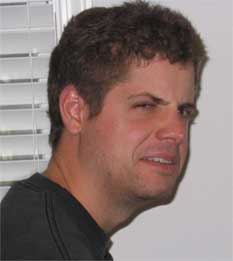 BEHOLD: THE RAVAGES OF AGE.Today's update deals with the subject of immortality. I got the idea while taking a shower the other day. What proof do I have that I'm not immortal? I mean, I haven't died yet, and that's really the only way to tell. I guess once I die people can gloat and say, "boy that Rich 'Lowtax' Kyanka sure was wrong about the whole dying thing," but the joke will be on them because I will be too dead to hear what they're saying! Hoo ha!

The update starts pretty slow but starts picking up steam when I get to the whole numbered list part. I love writing lists because they're easy to make funny. You don't have to worry about the whole "transition from point A to point B" aspect that comes with writing coherent thoughts. You just write and then skip to the next point. I love writing lists!

Today's update is also very long. I blame this on the fact that I recently switched my resolution to 1900x1200, although I'm not exactly sure why. Sometimes when I start writing, I can't stop until I stop. Today was one of those days. I know a majority of you guys prefer shorter updates with less words, but really, I couldn't help it. Once I get in the mood for lists, I cannot be stopped.

The "room which rotates upside-down" idea was brainstormed by my wife when I asked her what would be the best way to disarm a ghost. She originally suggested "a vacuum" and then "a magnet," but I found those to both be very banal! I don't know how we arrived at a rotating room, but I was very happy with the idea. Why am I writing this? Who the hell knows!

The Hellraiser comment was in reference to the movie "Hellraiser: Hellseeker," which I felt was a very good movie, just like "Hellraiser: Inferno," which I also enjoyed despite the fact that they both had the same plot. Lead actor Dean Winters was horrible though, as he looks like some smirking fratboy and lacks any facial expression beyond "smug." Craig Sheffer was a better actor in "Inferno," but that's not really saying much. My favorite Hellraisers, in order of greatness, are 2, 5, 1, and then 6. Parts 3 and 4 did not exist and you cannot convince me otherwise.

Oh yeah, I really did buy a cookie cake from the mall. It made my head feel as if it was going to detonate. I don't know how anybody can eat that crap. At least now I can use it as a tax writeoff since I used it on an update. Take that, Uncle Sam!

Why I Love the Something Awful Readers

One of the many, many cool things about running this site are the readers. I've never advertised SA anywhere and pretty much refuse to do interviews with magazines and newspapers because I don't want the crowd of people they attract. Sure I may be limiting SA's viewership, but I like it that way; I don't want SA attracting people who wouldn't normally visit SA.

That is to say, I want Something Awful to spread like a virus. I want friends to recommend SA to other friends. I want people to send email attachments with SA Photoshops, I want people to IM each other with links to forum threads, I want people to talk about articles we write over the water cooler. I don't want some drooling idiot who obsesses over American Idol and the latest 50 Cent single to read about this site in a newspaper. I don't want soccer moms and school teachers seeing an interview with me in a magazine. I want SA to spread amongst people with the same sense of humor. I want you guys to spread SA because you like the site and want to share it with friends like yourself. This site isn't for the masses, it's for you guys reading this.

I want to thank everybody now for spreading the word of SA to their friends and making it the success it is today. SA has been through some really rotten times, such as the Gamefan days and the eFront days, when I honestly didn't think I would keep doing it. Fortunately I'm a stubborn idiot and I kept going even when I was losing a few grand a month running the site, and companies like eFront owed me tens of thousands of dollars (which I still have not gotten). These days it's my fulltime job and I can afford a tech guy and a team of writers to keep the site going, with two or three pieces of original content every day and a thriving forum community. You guys rock and I'm lucky to be in the position I am today.

I made a forum thread asking people what I should write about in today's update, but I didn't end up using any of their suggestions because I was overcome with the immortality idea. I apologize, guys! I didn't mean to brush you off or anything, but when I get an idea which clicks for me, I have to write about it or else I can't stop thinking about it.

I got a crapload of replies regarding the launch of the Daily Dirt. You guys are awesome! I literally had over 1,000 emails in support of the idea. Contrary to what some folks may think, I really wasn't try to fish for compliments or anything on that update. I was just trying to explain the actual creative process I go through and the nature of running a "comedy" website. Most readers are passive, just reading what we write and moving on. While I have no problem with that, and I certainly don't write to the people who run the sites I read, I was just explaining that the lack of feedback is sometimes a bit... harsh.

I don't worry that people won't like the stuff I write, because honestly, that doesn't matter to me. That may sound insensitive and ungrateful, but really, I can only write for one person in this world and that person is me. I have no idea what people find funny, I just know what I find funny, and that's the only thing I'm capable of writing. If our sense of humor lines up, then that's awesome, I'm glad you enjoy my work. But the Internet is full of people who think I'm stupid, who think I'm immature, who think I'm a terrible writer. I don't care about pleasing them or entertaining them for free. It takes me around eight hours to write an update, and I'd rather spend that time creating something which makes me laugh, as opposed to something I hope makes other people laugh.

Sometimes people write me and tell me that SA isn't funny and that it sucks and blah blah blah. I always reply, "okay then, so stop reading it." I guess they're trying to hurt my feelings, but they don't understand the fact that I seriously don't care about the folks who despise me. You've got to have a thick skin to run a site which over 150,000 people read every day, or you'll end up killing yourself. I came to terms with the fact that a good percentage of the Internet will loathe me the day I started SA. If you're trying to insult me, at least come up with something creative and hurtful than "your site sucks," because honestly, I'm sure it does to you, and I'm completely fine with that.

I am working on mastering and mixing a CD of original ARC songs which I plan on releasing this summer. I haven't released any of these tunes yet. You can check out my old work here. The new stuff I've got is a lot darker and more complex than my previous stuff, and it's all done with soft synths. I sold all my hardware gear a while back, and now I work entirely within a PC. God, it's so much better. Trust me, I don't miss patching cables one bit.

I'm using Sonar and Project 5 to record and write the songs. Then I export the samples to Sound Forge and touch them up. Then I rearrange everything in Acid. I really get pissed off with Acid crashing nonstop and being a performance hog, but oh well, what are ya gonna do. And no, I can't switch to something like Live or Tracktion because all my songs are in .acd format and I'm not going to plot down another couple hundred bucks on something that can't even read my old tracks. BLAH!

I find I'm spending more and more time mixing shit than actually writing and creating it. Mixing is a huge pain in the butt. I send each sound group (usually individual sounds) to their own bus, which I compress individually and then send to the main bus. Each sub has an EQ (usually shelving anything below 160 or so), a compressor (usually the Voxango Crunchessor for drums and various other comps for instruments / efx), and then a harmonic exciter (Aphex). The main bus has a paragraphic EQ, Waves LinMB, Waves L2, and then VintageWarmer. The VintageWarmer does an awesome job in mastering compression, and you can get a great sound with the semi-saturated tape preset. It's very warm (without murdering your highs) and does a great job of squashing it all up. Just make sure to never use L2 on a setting more than -2 dB or else it will sound like some eight year old is just playing with the gain throughout the track.

As for soft synths, I really dig the Albino, the NI FM7, Absynth 3, the Phantom, and PlastiCZ. Then again, my favorite thing to do with any soft synth is to keep pressing "RANDOMIZE" repeatedly until I get some utterly screwed up sound, so your mileage may vary.

Please do not be offended if you email me and I don't return your email. I'm absolutely horrible with it comes to email replying, and I don't even respond to my own mother when she contacts me. I do read and appreciate all the email and feedback I receive, so please do not take a lack of response to be anything rude on my part. Actually it is rude on my part, so I apologize for it.

Oh, by the way, Shmorky and Humanity do the front page art for most of our updates. Shmorky used to do all the stuff, and now Humanity does a drawing for me once in a while. They are both incredible artists and I thank them for their contributions and drawings of my large package!

My wife is due to give birth to a baby girl in early July. We are really damn excited! There used to be a time when I didn't want kids and when the prospect of them terrified me, but that was just because I hadn't met the right woman. We're naming the baby Lauren. Don't worry, I'll try not to turn into another middle-aged faggot making stupid observations on family life every update, unless of course I can somehow make them interesting and not just transcribed "Ziggy" cartoons.

And, once again, thanks for all your email and feedback.