Welcome To The Internet Please Keep Our Blogosphere Tidy

When people started to discover that after gaining access to the internet, you would never have to go outside ever again, there was a lot of material introducing everyone to what the hell the world wide information super highway cyberspace web actually was. This generally involved a guide telling us what certain acronyms meant when used online. Sometimes there were even pictures of people in baseball caps and sunglasses leaning on a computer and smiling. But it was the acronym lists which interested me.

A lot of time has passed since these days. Unfortunately, this has lead to a lot of these acronyms becoming outdated and therefore these lists are now obsolete. But help is at hand, fellow internet user, because today I am going to bring everyone up to date with the latest internet jargon. Use my guide to surprise your friends, colleagues or local church minister with your advanced grasp of modern online idioms.

I would also like to point out that I am not a professional internet user like some people who write articles for newspapers and magazines, therefore my opinions do not carry as much weight as the ones of people who are "in the business". I am ashamed to say that I cannot compete with their knowledge, I have only been to the Blogosphere once. I was young and it was cold and I don't remember much about it so it's probably not worth listening to me but I do remember that Linkin Park were there too.

brb: Definition unknown. Unfortunately what this acronym stands for is one of the great mysteries of the internet. However it should be noted that the purpose of this phrase is to alert the user that his or her computer has been hit by a major fatal virus or perhaps several non-fatal viruses which in total are probably the equivalent of one major fatal virus. If you see this flash on your computer screen then you are already dead in the eyes of God. The hacker who sent this virus now has access to all of your passwords, your credit card and in some cases may legally own your soul. If you are unlucky enough to see this acronym it is probably a good idea to smash your computer with a hammer and set fire to the remaining pieces to prevent more damage taking place.

ST:TNG: Star Trek: The Next Generation

jssfgjkmbc: Oh no my cat just walked over the keyboard

RSS Feed: I don't know I think it is a place where they put bad horses (also known as a 'Pony Prison').

TNSTAAFL: There's No Such Thing As A Free Lunch. I don't know why this is here or how relevant it is to the internet but these lists always included this definition so I guess it must be pretty important! If you search for TNSTAAFL you will find one million websites dedicated to explaining what it means but none at all which actually use the acronym in any context. Perhaps it is used on hidden message boards and chatrooms dedicated to obtaining free meals and any kind of talk denying they exist is frowned upon. This has lead to those who oppose the idea of lunch for zero cost coming up with their own ways to communicate underground, in the form of TNSTAAFL. This is just speculation really if you are a researcher or journalist please do not use this in an article and quote me because I don't really know!

Well I hope this list helped you. If we meet again in cyberspace, don't be afraid to drop me a "WYSIWYG"!

'Wood' you please pay attention to the following sign 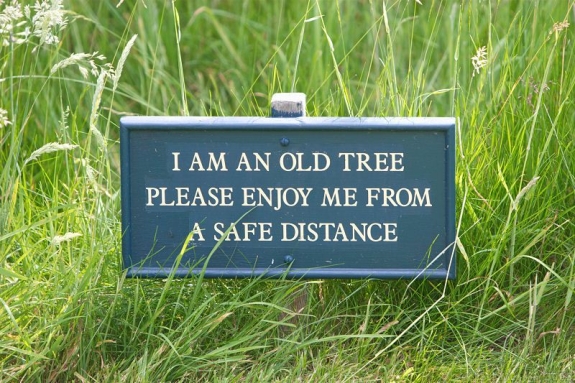