Greetings Obamawatchers! Obamadittos to all of you out there keeping America honest and straight. Today is our first update to Obamawatch and I am pleased to bring you some really juicy Obamawatch news.

Unfortunately, before I can get to that I have to take a moment to talk about our new Obamawatch logo. Johnathan "Doctor Evil" Titanium had designed a very awesome logo for the Obamawatch that included a crosshair over B. Hussein Obama's grisly visage. I have received an email from someone I believe to be a representative of the US Secret Service. They seemed to sympathize with my passion for exposing B. Hussein Obama as a terrorist, but they considered the crosshair over Obama's face to be more than a little threatening.

I tried to explain the whole "truth as a weapon" metaphor and that you couldn't kill anyone, other than maybe Vince Foster, with the truth, but they weren't buying it. So I asked Mr. Titanium to redesign our logo and here you are.

Alright! On to the meat of this installment of Obamawatch!

Richard Davis from The Ether Zone: The Intellicent Alternative, a very important blog, wrote a scathing piece on Obama's lack of credentials for public office. Davis likened Obama's campaign to Jimmy Carter's, an apt and terrifying thing to consider. While Obama is trying to posture himself as Abraham Lincoln, the homosexual, people forget that he shares a similar eperience with Jimmy Carter, America's worst president ever and also possibly a homosexual.

Unfortunately for Obama we've already tried inexperienced no-nothingism and found it wanting. His name was Jimmy Carter, and he was running for president. And he grew peanuts. Now he's a candidate for worst president ever and a favorite nominee in the ex-presidents category as well.

Obama tried his best to channel the spirit of Abe Lincoln when he announced his candidacy in Springfield earlier this month, but if you're going to pull that off you'd better have something to say, and he didn't. Nada. The country didn't turn to Lincoln because of his inexperience or his looks. He was hideous. But he had something to say.

B. Hussein Obama is hardly the hideous homosexual Abe Lincoln. What I think Davis misses is that while Obama may be telling America a whole lot of nothing and smiling big, he's hiding a bigger secret.

Ultra leftwing blogger Joshua Micah Marshall posted a 2002 video of Obama on his socialist Talking Points Memo site in which B. Hussein Obama discussed the Iraq war vote. In the video, B. Hussein Obama admits that he would have voted against the then-recent vote to authorize use of force in protecting America from Saddam Hussein. But there's something even creepier going on. Watch the video and listen to what Obama is saying. He talks about "Kurds, Sunnis and Shia" and warns that the country might dissolve into sectarian violence.

This is in 2002 folks. No one but a Muslim could have possibly known about those three groups and their sectarian squabbles back then. And who but someone working from the inside could have predicted that Iraq would be wracked with internal conflict? The only conclusion that an informed person can reach after watching this video is that Obama had sources inside the terrorist organizations in Iraq. Did he make these contacts while attending that Muslim extremist school in Indonesia? Only time and possibly Insight Magazine will tell!

Obama in the News

Obamawatchers have no doubt heard by now about B. Hussein Obama's vicious attack levelled against Hillary Clinton. Ever the coward, B. Hussein Obama used an unaffiliated donor to his campaign to make inflammatory statements about the Clintons during an interview in the New York Times. While Obama is out there preaching a change in the tone of politics, he's having his minions engage in the politics of slash and burn and doing whatever he can to paint Hillary Clinton as a monster. Clinton's campaign politely encouraged B. Hussein Obama to return all of the money he received in a major fundraiser, and he refused, clinging to his silver pieces like a 21st century Democrat Party Judas.

Keep an eye on this story, Obamawatchers! For once it seems Hillary Clinton is actually doing something to defend this country!

Obamawatch has received a lot of mail already. Most of it has been supportive, but as usual there are a few liberals with the wool pulled so far over their eyes that you just can't lift it up with hot gusts of truth. Let's take a look at one of the letters and see if we can't set the record straight!


I read your article, and from what I read between the lines - you should get
out of white, Christian-dominated suburbia and live in a large city, because
you will realize that America is multicultural and contain different points
of view. You prove NOTHING with your article, claiming that Obama is the
biggest threat to America. All you have proven is your IGNORANCE, your
RACISM, and your point of view has as much credibility as Ann Coulter. I'd
be surprised if you even know who she is. You attack Obama's background, and
conclude that he is really a jihadi in disguise. But with the evidence you
state is inconclusive and extremely opinionated. You claim to know all about
Obama, yet just focus on the situation in which he was raised. You know
NOTHING about Obama and what kind of person he is today. I want real PROOF
that Obama is a jihadi. You say that Obama cannot represent America. Yet, he
represents America as both white and black, both Muslim and Christian, and
both immigrant and America. So stay out of politics you doucebag. You know
nothing about it. You know nothing about America. You should go to college
sometime, out of white-dominated suburbia and you'll see. You probably would
eat out George W. Bush's asshole if he called you up to tell you that it
would "save America from the foreigners." Next time, I want proof rather
than bullshit opinion. Your sad attempt is Michael Moore-ish at best.

Well Rdldr1, I am neither a racist nor a doucebag, but I will admit that I have based my opinion on B. Hussein Obama largely on his past. To attempt to bring a greater degree of fairness to my reporting for Obamawatch I have utilized a time machine to view America as it will appear in 2011 if B. Hussein Obama is elected president: 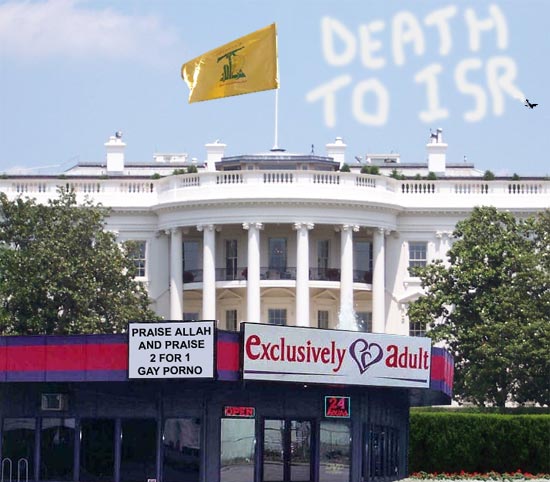 If you look deep inside your heart, Rdldr1, I think you will find that it is you!

We end this Obamawatch on a very exciting note! February 23rd marks my birthday and all Obamawatchers should feel free to purchase a gift certificate from Amazon.com and send it to zackparsons@somethingawful.com. I promise to use your birthday gift to purchase only things related to helping the world become better educated about B. Hussein Obama.