I've Got a Brand New Pair of Rollerskates...

Friday, May 20, 2005 by Zack "Geist Editor" Parsons (@sexyfacts4u)
...and they are made from mimetic poly-alloy. Liquid metal.
Today's Update

Who cares?! Fuck you!

I Had the Titular Line in "Revenge of the Sith"

No, really, I had the titular line. I came on screen for a few seconds in the Jedi Council scene where Yogurt is a holograph and I said "Boy oh boy there is going to be a revenge of the Sith."

The long, sad story of the Star Wars prequel trilogy is over at last. Lucas has done the impossible and polished a turd into a gleaming gem. You'll still see most of the flaws you saw in previous installments, but they're gloriously overshadowed by non-stop action, violence, and the dark side that Star Wars has been lacking since "The Empire Strikes Back." No, it's not nearly as good as that movie, but it's up there with "A New Hope" and it beats out "Return of the Jedi" for everyone who wasn't just the right age when that movie came out to get sucked into the too-forgiving nostalgia vortex. 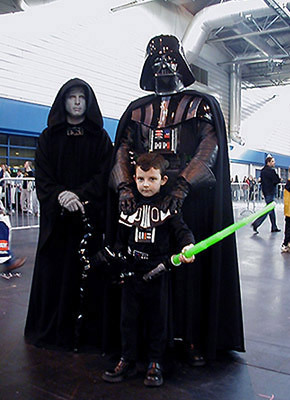 For Star Wars fans it's a two hour long sigh of relief that all the doubt they've had creeping into their minds about Lucas and his non-retardate status can finally be dispelled. The flannel wearing goiter king has saved the day. For everyone else the buzz is a mix of "gee-whiz" and politics. Yes, the hideous political divide has cropped up in Star Wars and the swampy fecal mire of Bloglandia has been chattering away incessantly about it. The controversy stems from a few lines of dialogue Lucas inserted into the film that many feel are his commentary on none other than George W. Bush.

"If you're not with me, then you're my enemy!" - Darth Anakin

"Only a Sith deals in absolutes." - Obi-Wan Kenobi

"This is how liberty dies. With thunderous applause." - Princess Amidalla

"We must wage a preemptive war against the Jedi and bring freedom to Coruscent." - Chancellor Emperor

Well, okay, some of those are in there. The whole controversy surrounding political commentary inserted into Star Wars is appallingly stupid on both sides of the aisle. The conservative bloggers (and some politicians) are aghast that Lucas would dare to comment on George W. Bush in his movie and many have suggested that lines like that are wholly inappropriate and should be removed. God forbid science fiction comment on current events! Well, I fucking never! Break out the black markers! 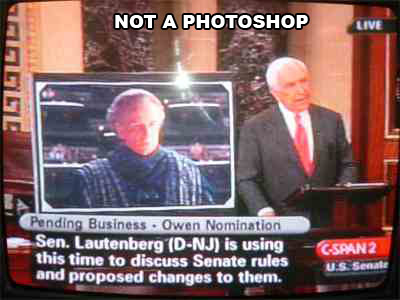 Senator Lautenberg (D-NY): The biggest film of the year is opening this week: Star Wars.Portrayed here is one of the characters in that film, the leader of the senate in a far off universe. In this film, this leader of the senate breaks rules to give himself and his supporters more power. After this move by the senate leader, another senator states, "This is how liberty dies!" One film critic described this film as a story of, "A power republic that dismantles its own democratic principles." Mr. President, as millions of Americans go to see this film this week and in the weeks ahead, I sincerely hope that it doesn't mirror actions being contemplated by the Senate of the United States. I say to my colleaugues, "Don't let liberty die." (Thanks to Retrohelix for the transcription and image)

Then on the other side, you've got liberals ejaculating with joy over a few subtle throwaway lines in an action science fiction movie targeted for nerds and children. This isn't fucking "Platoon" or "Schindler's List" here, Air America Radio. We're talking about Star Wars, and kids aren't going to be cursing the Bush administration as they fly their toys around the rumpus room. Besides, if you had to wait to hear those lines to realize that the Force and Jedis are just a bunch of green party members into healing crystals then you haven't been paying attention to the series since 1976.

In the end it's just a pretty damn good movie if you can overlook some of Lucas' sometimes amateurish dialogue and the woefully condensed convenience of the film's last five minutes. And for those of you wondering: yes, Chewbacca does give Yoda a piggyback ride.

Speaking of politics, conservative radio commentary has reached a new low! You didn't think it could get worse than confessed Nixon henchman G. Gordon Liddy encouraging people to shoot Federal agents? Think again! National radio halfwit Glenn Beck has elucidated on his brilliant plans to end the life of bloated liberal shitbag Michael Moore to his 6 million member audience. You may remember Moore's many death threats that he has issued…oh wait, no, he doesn't go that low.

Check this bullshit out: 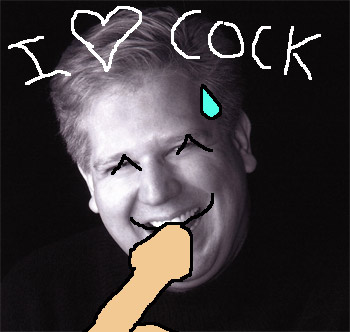 BECK: Hang on, let me just tell you what I'm thinking. I'm thinking about killing Michael Moore, and I'm wondering if I could kill him myself, or if I would need to hire somebody to do it. No, I think I could. I think he could be looking me in the eye, you know, and I could just be choking the life out -- is this wrong? I stopped wearing my What Would Jesus -- band -- Do, and I've lost all sense of right and wrong now. I used to be able to say, "Yeah, I'd kill Michael Moore," and then I'd see the little band: What Would Jesus Do? And then I'd realize, "Oh, you wouldn't kill Michael Moore. Or at least you wouldn't choke him to death." And you know, well, I'm not sure.

Hilarious! Well, I'm thinking about killing Glenn Beck! I'm thinking about taking his head in my hands and pressing my thumbs against his bulging fear-filled eyeballs until they burst in his sockets. I bet he'll scream and beg for mercy, but I'll just slice his pants off with a buck knife, widen his asshole up a little with a funnel, and then turn him into a homosexual by force. After I'm done with that I'll bring some animals in to unleash the beast on his shattered colon. While he drools and bleeds out on the floor I'll start cutting strips of flesh off - starting with his scalp - and cooking them in a wok! Hey, I'm on Atkins and I bet Glenn Beck is just full of delicious protein.

When shock claims him I'll chain him to a bare box spring in my basement and hook him up to IVs to keep him alive. That way I can keep his meat fresh for weeks AND have a sodomy pal whenever I need to work through a little stress. When poor Glenn has nothing left to give and he whimpers his last "up or down vote" I'll rip a meathook under his ribs and haul him out back for the vultures.

At least that's what I'm thinking about! And you know, well, I'm not sure.

Oh, by the way, there is a ridiculous 1.1 megabyte JPEG of Glenn Beck hosted on some horrible radio muffinhead website. I don't know why the picture is so huge but hey, take advantage of that offer of free JPEG. This Glenn Beck thing seems like a big deal to me, but what do I know? Maybe when you're as far away from Limbaugh in the echo chamber as Beck is - when you're subsisting on the prescription drugs that deaf fuck excretes through the semen he lets you felch out of Daryn Kagin's withered cornhusk of a uterus - you can get away with this sort of thing. I just don't have my finger to the pulse of what matters anymore in America. I had no idea Newsweek would emerge from the sewers a few days ago and murder all those innocent people in Iraq and Afghanistan, but I was wrong on that one too!

Remember a couple weeks ago how I said I wanted to chuck a boner up Lindsay Lohan's butt? RETRACTED! Party girl Lohan has been spending too much time skeezing around with cord-necked rail of bone and sinew Paris Hilton. After consulting with methamphetamine and Paris Hilton's camera phone Lohan decided to have her mouth-watering body placed in a Popeil fruit dehydrator. The junk has been suctioned out of the trunk, the cups runneth empty, and Lohan now looks like a piece of turkey jerky that someone has daubed fresh Christian baby blood onto. 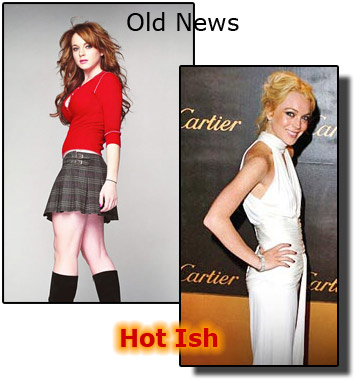