Way back in 1981 TSR blew the minds of an entire generation of gamers with the crusty British oddities of the original Fiend Folio. We've said our piece about that version, so today we set our sights on the 2003 version produced by Wizards of the Coast for D&D's 3rd Edition. The WoTC Fiend Folio features much higher production values and roughly ten times the number of barbed tentacles per monster. It brings back a lot of old classic monsters and introduces its fair share of new, useless additions to the D&D monster pantheon. Is it an improvement on the original? You be the judge! 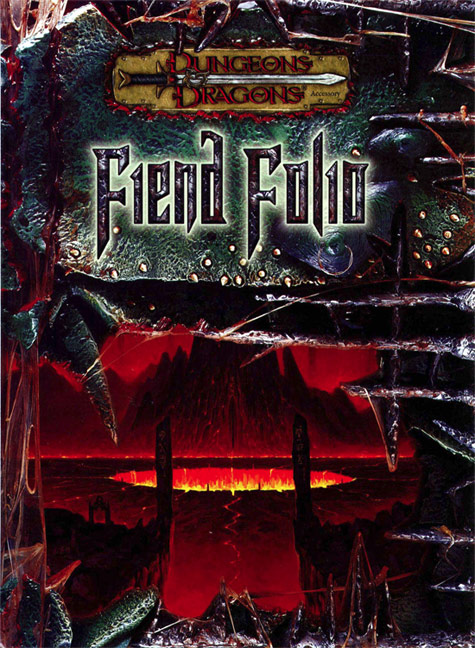 Steve: The book that dares to put a monster titty back where it belongs: on the cover.

Steve: Look very closely, bro. Right below the "I" in Folio. That's some sort of devil nipple. You can tell because only evil outsiders pierce their nipples.

Zack: There's also a vagina in the middle of the mountain there. And a huge fire butthole. And triple wieners.

Steve: Just because I Waldoed the hell out of that purple nipple doesn't mean you have to get all bent out of shape.

Zack: Steve. Remember how bad the first Fiend Folio was?

Steve: It was awesome. So no, I don't recall this alternate reality Sliders universe you're recalling.

Zack: Oh man, this is gonna be brutal. I can feel it.

Steve: Brutally excellent is more like how it is going to be. I can double feel it.