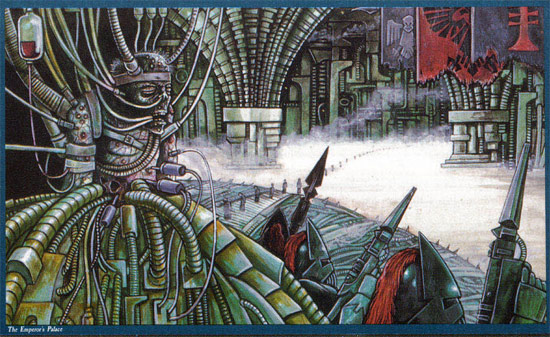 Steve: You'd think maybe they could shoot the blood up one of the 75 hoses permanently attached to his rotting guts.

Zack: In an alternate reality this is 38,000 years in the future for Terri Schiavo.

Steve: Whatever, dude. If Terri Schiavo controlled the navigation of spaceships I'd probably vote to keep her plugged in too.

Zack: Damn you Emperor for not writing a living will!

Steve: Keep talking like that and you're liable to grow a nose out of your forehead.

Zack: Huh? This is a storyboard for Stuart Little 4: Stuart's Inferno. I don't know how it got in here.

Steve: Bull, dude. Bull. That is some creepy sort of space marine and a little tank and a rat man and, I don't know what he's doing, but it's freaking me out.

Zack: Calm down. Stuart's wife committed suicide and he's just trying to rescue her from hell. That's her in the test tube.

Steve: When I close my eyes I can still see this picture.