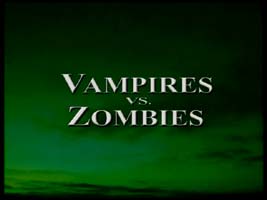 Overview: In the midst of an outbreak of a zombie virus, a father and daughter pick up a hitchhiker who has a nasty secret - she's a vampire. Luckily, the father and daughter have a secret of their own - they're vampire hunters. How's that for a coincidence?

The Case For: With a title like "Vampires vs. Zombies," how can you go wrong?

The Case Against: As it turns out, you can go very, very wrong with a title like "Vampires vs. Zombies."

"Vampires vs. Zombies" sounds like a surefire winner, doesn't it? I mean, you've got vampires, which are inherently cool, and you've got zombies, which are inherently always trying to eat my brain, and are therefore cool. The title of this movie really sums up the entire plot. Or at least, it should. In a perfect world, a guy could go to the video store, pick up a movie called "Vampires vs. Zombies," and settle in for an hour and a half of bloodsucking badasses wading through a sea of angry zombies and zombie by-products, all tied together with a loose and infrequently addressed plot. This is not a difficult concept. I'll give you the script right now:

Hot Lesbian Vampire 1: "I sure do love sucking blood!"
(An army of zombies suddenly comes over the hill.)
Hot Lesbian Vampire 2: "Oh no! Zombies!" (Proceeds to kick monumental amounts of zombie ass, pausing briefly to have hot sex with HOT LESBIAN VAMPIRE 1.)

Bam! Cult classic. Seriously, that script is a one-way trip to Moneytown. That's where rich people live, my friend. Unfortunately for himself, as well as for just about everybody else on the planet, screenwriter Vince D'Amato said, "Oh ho! I know just the thing to jazz up this premise! I shall stuff this movie full of senseless, incomprehensible plot, much like I stuff my anus full of rabid, ebola-ridden spider monkeys that are also on fire." But he didn't stop there. "Oh ho," said Vince, grimacing slightly as he sat uncomfortably on his latest rabid-diseased-flaming-monkey wounds, "Now that this movie is full of good, rich, completely pointless storyline, I will direct it myself, so that I might personally ensure that no one who sees this movie will ever have any idea what's going on!" So sadly, Vince D'Amato took a premise that was basically guaranteed to make his movie an instant hit with the indie horror crowd in spite of his nonexistent budget, and he fucked it until it bled. The resulting wretched, scarred, abused, tortured rape victim of a movie is an unwatchable seventy minutes of shattered homes and broken dreams. 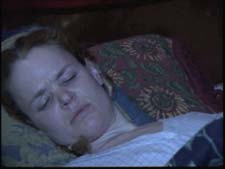 I've never been able to figure out how to have a dream about having a dream. It seems like a skill.

When the film opens with a shot of the moon that is shaky enough to mix a martini, it's like a quivering red flag, warning the audience that the bomb they are about to watch could register on the richter scale. After Vince D'Amato is properly satisfied that his moon shot has conveyed the complex notion of "it's night," the shot transitions to a young blonde woman asleep in her bed with the covers bunched up around her waist and her legs spread. This, as we all know, is the universal sign for "please let a female vampire bite me on the inner thigh." If you don't believe me, just try it tonight. Lo and behold, a woman comes creeping up from the foot of the bed, advancing on the sleeping blonde in such a way as to say, "I'm of a mind to do some thigh-biting."

However, it turns out that it's all a dream as the young blonde, Jenna, wakes up screaming. She does that a lot. And I mean a lot. This movie is filled with dream sequences, which serve as a heavyhanded method of foreshadowing, backshadowing, starboardshadowing, spiralshadowing, and general wasting of time. Of course, in a movie that's only seventy minutes long to begin with, and half of that is made up of dream sequences, there's not an awful lot to foreshadow. Here, I'll ruin it right now: Jenna gets bitten on the inner thigh by a female vampire. Nonetheless, she has more dream sequences than any single character in any movie ever. Naturally, this means she goes to sleep constantly, which is pretty much the only way this movie marks the passage of time, since, other than that first amazing shot of the moon, the entire movie takes place during the day, because everything's scarier in broad daylight. Oh wait, no, that doesn't sound right. That doesn't sound right at all! Anyway, since Jenna falls asleep every four minutes or so, but none of the other characters ever do, it's pretty much impossible to tell how much time has passed. That's not the only trick "Vampires vs. Zombies" plays with time, either. It also somehow manages to make seventy minutes feel like four hours.

Jenna wakes up in the passenger seat of a Jeep. Her father, Travis Fontaine, is at the wheel. They drive on down a road through the woods somewhere. Suddenly - and by "suddenly" I mean "way, way ahead of them" - a man in shitty makeup steps into the road. Judging by his bad skin and moronic behavior, it's safe to say that this is one of our zombies. Fontaine must see him standing there in the middle of the road, but he doesn't even attempt to slow down or swerve. He plows right over him. The zombie's head pops right off. George Romero be not proud. In fact, George Romero probably be pretty pissed off. Fontaine and his daughter just keep on driving, as if nothing had happened. Someday, if I ever have a daughter, I hope that we can run zombies over together too, just like the Fontaine family. Vince D'Amato apparently thinks that having his characters do something as traumatic as running over another human being without showing the least bit of reaction is the sort of action-packed sequence that grabs an audience, because he uses it as his launch into the opening credits. As the credits die down, a voice over begins that sounds like it could be shitty narration, but sadly we soon learn that it's actually just really, really shitty radio announcing. The guy sounds like he struggled to get through fourth grade, then just said "fuck it." The voice over explains that an animal attack may have passed along a strange disease that is making people show rabies-like symptoms. So in other words, rabies. The radio doesn't mention anything about the discoloration of the skin, craving for human brains, pack behavior, or inability to die from anything short of beheading. So it's safe to assume that the citizens of Middle of Nowhere, Anystate are well-prepared. Fontaine seems to be pretty knowledgeable about taking out the zombies. That's never really explained. I think we're just supposed to assume he got his degree in Zombology from Cornell. 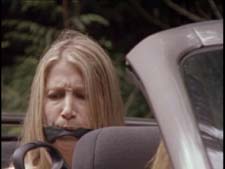 Ah yes. This is perfectly normal.

The Fontaines come upon a car stopped in the middle of the road. Two women - Julia and her daughter Carmilla - greet the Fontaine when he gets out of the Jeep. A third woman who is bound and gagged sits in the back seat. Julia claims she's infected with the disease. Sure, Fontaine obviously must know the zombie disease well enough to spot one from a distance and be confident enough about what it is to run it over, but the fact that this girl in the back isn't exhibiting any signs whatsoever doesn't bother him in the least. The man runs people over without a second thought and doesn't even raise an eyebrow at strange women with an obvious hostage in their car. He must have had an interesting childhood. Julia asks Fontaine to take Carmilla along with them as she takes her "other daughter" somewhere to get help. That's just about the flimsiest pretense you could ask for to get Carmilla in the car. I'm not talking about the "Save one of my daughters while I try to save the other" bullshit that Julia dumps on Fontaine. I mean the entire zombie thing. Seriously, the only purpose the zombies actually serve in this pathetic abortion of a movie is to provide a reason for Carmilla to go with the Fontaines. Do you see what I'm getting at, here? This movie blows gopher pole.

Being the good samaritans that they are, in addition to needing to move the "plot" along, Jenna and Fontaine let Carmilla come with them. They drive for a little bit in awkward silence. Finally, Fontaine strikes up a conversation to keep the plot moving:

Fontaine: "I better get some gas."
Jenna: (Long pause)"That's a good idea."
Fontaine: "We need gas." 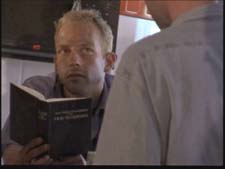 There's something ironic about the gas station attendant reading the Holy Scriptures, but I just can't put my finger on it... oh, I know what it is! A movie this bad means there can be no God!

See, without that conversation, we'd never be able to figure out why they stop at a gas station! Thank God for the clarity of the dialogue in this movie. The gas station scene is probably the longest scene in the movie, owing largely to the fact that everyone in it seems to feel the need to wait uncomfortably long before delivering their next useless line. It's all idle chat, as the gas station attendant gives Carmilla the restroom key and is generally a dickweed to everybody. A woman named Bob comes into the station and gives Jenna a necklace for no reason. It is later revealed that she also gave an identical necklace to Carmilla, but Carmilla crushes hers into powder. Seems pretty suspicious, doesn't it? The sort of thing that could prove vital to the plot? Too bad it isn't. In fact, the necklaces serve no purpose whatsoever except to tack another couple minutes of bad acting onto this movie. Come to think of it, the only point to this entire scene is for Carmilla to bite the gas station attendant's neck when he helps her with the bathroom door. Oh, in case I forgot to mention or you're retarded and couldn't figure it out, Carmilla's the vampire. I don't mean to come off as harsh, there, but there's really no point in trying to maintain any suspense about this movie. Carmilla's the vampire, and that's that. Never you mind the fact that, as I said earlier, the entire movie takes place in the middle of the day. In fact, it's probably best if you apply as few brain cells as possible to the grueling task of trying to figure out what this movie is trying to do. No brain cells went into making this movie; I don't see why any should have to be used to watch it.