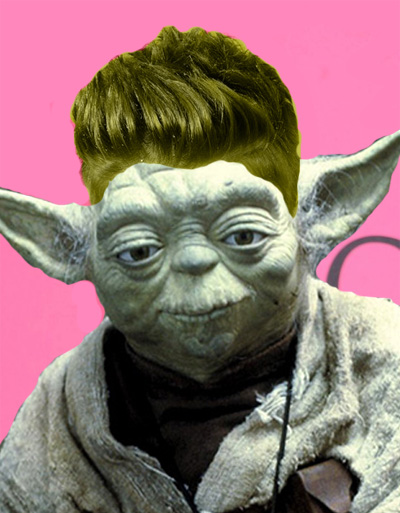 Zack: You kick open the grate on the duct and jump down expertly into Yadda's dressing room.

Steve: Is he impressed with my jump?

Zack: Yadda looks at you, giant and covered in ewok blood, and begins screaming and trying to run away from you.

Steve: Hey, yo, calm down little man. It's okay. I mean you no harm. I just need an autograph for my friend.

Zack: "S-sure," he says. He reaches over to pick up a head shot from his pile of photos and then suddenly throws them all in your face and runs for the door.

Steve: Can I grab him?

Steve: Can I throw something at him?

Zack: You can throw your light saber.

Steve: I don't want to kill the little dude! Is there a way I can like throw it and bank it off the wall so it knocks him over but doesn't chop off his arm or something?

Zack: With your intelligence, absolutely, no problem.

Steve: Alright I am making that throw. I can't let him get away before signing that autograph.