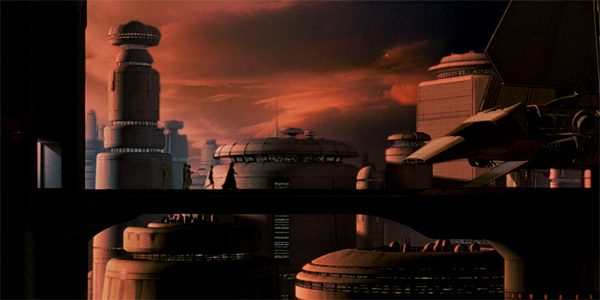 Zack: You arrive via cloud taxi at Cloud Restaurant in the cloudiest neighborhood of Cloud City. Everyone who is anyone has scored an invite to the dinner party and there are all sorts of flying limousines and wookiees in tuxedos.

Steve: I want to sneak in.

Zack: There's a red carpet and lots of holorazzi with flashing amulets.

Steve: I tell Ruth and Beth to go in that way, I am going to sneak in another way. I don't trust this Lando guy. He is a scoundrel.

Zack: Using the cover of Beth's barge arriving and her entourage unloading from it, you sneak out of the cloud taxi and jump over the roped off section of the walkway. You sneak into the alley behind the restaurant and climb onto the roof near the ventilation ducts.

Steve: Gonna climb in that duct.

Zack: You open the duct and are greeted by the sight of an Ewok wearing an earpiece. He seems surprised to see you and says, "Yub nub?"

Steve: I draw my light saber and strike him down!

Zack: He's not attacking you.

Steve: I STRIKE HIM DOWN!

Zack: Your light saber hisses open. With a whoomp and a flash you chop the ewok into steaming pieces. Gain twenty dark side points.

Steve: That's a lot. Do you even know how they work?

Zack: You just murdered an unarmed ewok in a duct.

Steve: Fine. I will just have to cancel out my dark side points with good deeds. Hopefully someone is bullying an alien somewhere at this party.