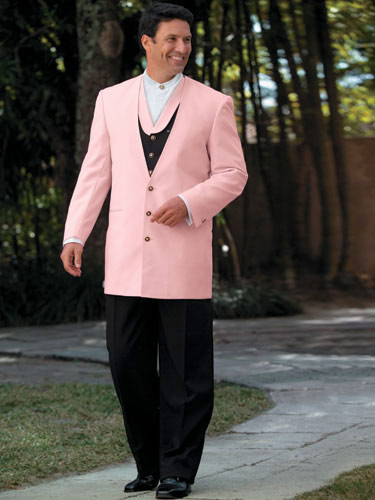 Zack:This guy looks like he should be working a table at a casino in Vegas where the theme is something like "the inside of the ear" or "celebrity skin grafts." He could be the "Brian Kilmeade after a sulfuric acid burn to the torso" impersonator. He could make really bad sports jokes and then accuse people of being liberal and challenge them to fist fights.

Dr. Thorpe:He's turning to the side and smiling because he's having to explain for the millionth time that he's not the valet. "No, sorry, I just dress like this, I'm just basically a big homo."

Zack:"Sorry, gotta run. I've got a DJ gig at this state's first gay wedding. I never knew there was a dance mix for 'The Invitation to the Jellicle Ball.' Heh, learn something new every day."

Dr. Thorpe:I bet if you pop that gold button off his collar the whole outfit falls off. It's a trick stripper suit.

Zack:That would probably be a relief to pretty much everyone nearby.

Dr. Thorpe:Yeah, this outfit is much more shameful than the human form. But you just know he'd have some kind of awful thong underneath that would just make it worse.

Zack:Yeah, he would be wearing those edible fruit rollup panties and it would have melted into his crotch creating this hideous morass that looks like he has been having sex with a slop bucket at a slaughterhouse. Speaking of terror, this is really the sort of thing that terrorists should wear when they're trying to sneak weapons onto an airliner. You don't search a guy wearing something like this. No terrorist is that stupid.

Dr. Thorpe:Yeah, you just wave this guy past, if you search him you'll just wind up smelling like cocoa butter and stale sex.

Zack:And that only makes you wonder who or what he has been having sex with. Helen Keller would recoil in horror from this guy. Terri Schiavo's cells would screech inhumanly and start her wasted frame Hopak dancing just to prove that even her flesh is unwilling.

Dr. Thorpe:He's having sex with all the other goofy assholes in the International Male catalog. They're like the drama kids in high school, they all get laid all the time, but only with their own horrible, horrible kind.