Thursday, Jun 23, 2005 by Zack "Geist Editor" Parsons (@sexyfacts4u)
Dr. Thorpe and Zack have boarded a really unsafe airplane bound for Calcutta so they can bring their friendly constructive criticism to the fashion of India’s and Pakistan's movie posters.

Dr. Thorpe: This week on Fashion SWAT we have a bizarre treasure trove of Indian and Pakistani movie posters. I hope you'll all forgive us if we forget to say much about fashion, but we feel that sometimes the only way to comment on fashion is to NOT comment on fashion. Does that make sense? Well, if not: basically, we forgot to talk about fashion.

Zack: Special thanks on this one go out to our reader Tim who suggested we do Bollywood (India) and Lollywood (Pakistan) posters. These images were taken from the weird Islamabad ice cream store website The Hot Spot Online. If you're tired of movie posters that consist of profile shots of Tom Cruise then this is the Fashion SWAT for you. 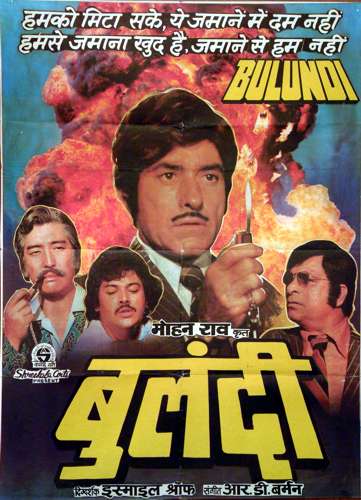 Zack: Listen up ya'll it's Bulunditage!

Dr. Thorpe: This has to be the most disappointing moment in a pyromaniac's life. He's sitting there staring at his lighter like it's the Holy Grail and he misses the most fantastic explosion he's ever likely to see, right behind him.

Zack: The guy with the pipe is also entranced by the lighter.

Dr. Thorpe: I think the guy with the pipe is his dapper English sidekick. "Bulundi, old chap, you're never going to see any magnificent explosions if you keep gawking at that flame of yours."

Zack: "Bulundi, could you spare a bit of that fire for my chicory blend or do you intend on staring at it until you have cobwebs on your eyelids?"

Dr. Thorpe: It's a little bit sad to see Bulundi's extra-chromosome brother trying to decipher the gibberish written at the bottom. You can almost smell his brain working.

Zack: That nefarious character off to the right is probably his special ed teacher, ashamed that he has yet to prove Bulundi's brother is a trainable.

Dr. Thorpe: I think this is sort of a collage of the climax of the picture. Bulundi is in the foreground contemplating whether or not to set his toupee on fire, his brother is completely unaware of what's going on, Percy is smoking on his pipe and saying something like "Quite." and the explosion in the background is what happens when Bulundi gets that flame near his hair.

Zack: I think that reading is all wrong. I think Bulundi has seen the greatness of another's explosion and now he is gazing wistfully at his lighter wondering what might have been if he had just bought that utility van full of fertilizer. Squinty Pipeslinger is definitely saying "quite" though.

Dr. Thorpe: Or maybe he's about to burn off the caterpillar crawling across his face.

Zack: "Oh silkworm, dare you tread upon my lip again? You shall feel my flame." "Mmm yes, quite Bulundi. You show him, old chap."

Dr. Thorpe: Eventually those caterpillars meld with your brain and turn you soft in the head, like his unfortunate brother.

Zack: I've glanced over some of the other pictures in this series and I think you're playing a dangerous game using up all of your mustache jokes on the first one. We need to get a lot of mileage out of mustache jokes.

Dr. Thorpe: You know, my friends and I are actually growing mustaches right now. There comes a point in a man's life where he has to "ride the dragon" and stop shaving that lip. Only then will he know what it is to be a man.

Zack: Are you going to become detectives in Hyderabad too?

Dr. Thorpe: Bulundi is an inspiration to us all. You can see him, he's so tempted to burn it off, but he has to stay strong. Yes, Bulundi, your mustache will look stupid for the first week or two, but you've got to stick with it.

Zack: He probably has a picture of Rollie Fingers on his wall to remind him of his goal. One day, Bulundi. One day you will be able to wax and curl and show people that handlebars aren't just for bicycles anymore.

Dr. Thorpe: You can tell the guy on the bottom right is the villain. He has no mustache, which means he's no kind of man at all.

Zack: He probably has some sort of follicle disease that has turned him evil. "Do you know what it is like to suffer the barbs of your peers because of your smooth upper lip? No, of course not Bulundi. You with your regal be-maned lip shall never know my true suffering. Your mustache may defeat me, but your explosions are no match for mine."

Dr. Thorpe: He's got quite a head of hair, though. His sideburn looks like a sloth's arm reaching down and grasping his jowl. He is evil sloth-head-man.

Zack: Maybe they develop some sort of facial-hair based martial arts and then they fight each other, mustache-on-sideburn.

Dr. Thorpe: Or maybe they're rivals in a gang war, and he wants revenge on Bulundi for burning down his mustache years ago.