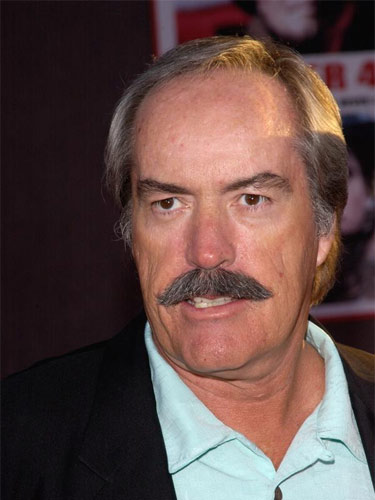 Dr. Thorpe:You see this man, International Male models? This man is going to fill your mouth with spiders, if you're lucky. He might just stare you to death with his electric intensity.

Zack:International Male can't sell this. This is real. This is Boothe. You try to package that and market it and you're just going to kill it. Like a great thoroughbred horse sealed in Lucite.

Zack: Yeah, and not in a vague or symbolic sense. They are literally talking about Powers Boothe. Look at that fucking mustache. That is raw power there. He could destroy the building that International Male calls its sissyfied headquarters with that facial hair.

Dr. Thorpe:Usually guys who are a little bit jowly look sloppy, but Powers Booth looks like he got those jowls from ripping the meat off International Male ribcages all day long.

Zack:Those are like Samson's locks, man. The jowls just feed his strength. He could bite through the skull of a bison.

Dr. Thorpe:You can tell this picture was taken on a red carpet or something, but he's not looking at the camera. He's staring out into the crowd because he just spotted a dude in a velvet cape and he's about to smash him into a quivering slurry.

Zack:He could pulp an International Male at a hundred yards without even glowering hard.

Dr. Thorpe:He's not smiling, either, he's grimacing. I bet there's a low growl coming out of him, warning International Males that he means business.

Zack:He's going to find that shirtless guy in the suede pants and strangle the dude with his own veins. He will boot that bib-top wearing homo by the pool so hard in the chest that his ribcage will flip inside out and his mom will collapse from a heart attack. .

Dr. Thorpe:He's going to push the dude in the Opera Trenchcoat down the stairs so hard the stairs will turn into a ramp.

Zack: Nap time at the hacienda is going to be apocalyptic. Powers Boothe is going to stride among the napping dudes like the Colossus of Rhodes and when he smells a pin stripe or pink shoes he's just going to reach down and rip out the guy's soul. Rip it out and look it in the eye and then swallow it.

Dr. Thorpe:And at that point, that soul's not going to worry about hell or oblivion or anything. As soon as it feels his icy fingers grip it, it's going to start worrying about that moment when he looks it in the eye. It's going to last only a fraction of a second, but it's going to seem like an eternity of piercing, horrible agony.

Zack:It will welcome hell or oblivion. For that split-second it will beg for an eternity in fire.

Dr. Thorpe:The fire won't even bother it in hell, the lingering memory of his steely eyes will be all the torture it can stand.

Zack:That dude in the fur coat? Forget about it. Boothe is going to skin that guy and turn his pelt in at Spencer Gifts for store credit. Then he's going to buy one of those candles that looks like a vagina and he's going to light it and he's going to fuck it until there's nothing left because he doesn't half-ass anything.

Dr. Thorpe:Jesus, this photo should just be shown to babies when they're born, and they'll never turn into sissies. They might be afraid of mustaches for a while, but it'll be worth it.

Zack:Yeah, it's like the all-encompassing life equivalent of those highway safety videos where it shows the consequences of not wearing a seatbelt. You fuck up and THIS is going to be the last thing you see. They won't even find your bones.

Dr. Thorpe:They'll grow up knowing that if they ever even think about becoming the Ultimate Poet, this man will be right behind them, silently slitting their throats with a bowie knife.

Zack:He doesn't even need a knife, he just keeps one fingernail really long and he sharpens it to a razor's keenness.

Dr. Thorpe:And then he turns their whole head around, snapping their spine while simultaneously giving them one last glimpse of true manhood.

Zack:And as your mouth fills up with spiders, you will know that he is right and that you deserve everything Powers Boothe has done to you.

Dr. Thorpe:And then he casually walks away, starts up his hovercraft, and flies into the night sky, where he will play Texas Hold 'Em with Hercules and Thor and maybe shoot one of them dead just to prove a point.