Hell, seems like I only come here when I've got the angry blood. Last time, some book-learned jackass was giving hassle to the flag. Now, Hollywood degenerates slapped our country's name on a filthy freak show. Now, let me give you fair warning, more than I got before sullying my peepers: Parts of this story are only for folks old and wise enough to drink whiskey legal-like.

They told me America's Got Talent is the U.S.A.'s number one show, and with a title like that, I wasn't a damn bit surprised. To my mind, the world would be a better place if every program could see fit to give our country a compliment in its title, like a tithe the producers pay for living in a land that offers its citizens the liberty to enjoy television. Let me tell you, though, this abomination uses America in vain! I bet Uncle Sam's crying blood tears.

I go see anything with God's magic word in the title, and I haven't seen such indecency since back in 1999, when I watched perverts having man-sex and defiling our nation's own sacred dessert in American Beauty and American Pie. I'm sending NBC my resignation of viewership -- right after the Olympics is over. I'm not going to punish our heroic medal winners for their network's debauchery. 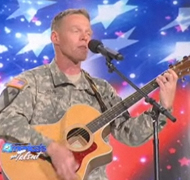 I don't want to make you heave your suppers right away, so I'll start with the only worthwhile things I saw. They should've given this guy the damn prize as soon as he walked on stage in that uniform. He played that guitar like a man, too, not some Woodstock hippie. I wish he'd displayed some of his soldiering talents, like showing what he can do at close range with an Arkansas toothpick, but I guess it's best to keep those skills covert.

I remember Ruben Studdard from American Idol, which is a fine show, other than that uppity Redcoat judge. I saw him sing "God Bless America" on the Today show once, so I hate to give him the bum's rush, but that dog's had his day. He can't just go around winning every contest, stealing money from deserving servicemen. 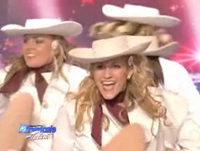 The Dallas Cowboys cheerleaders dance for America's team, so they deserve our respect, but they already have some of the best woman jobs going, so I don't know if they should be getting all gold-digger greedy for prize money.

Now, here's an inspiring story, from what I could stuff into my good ear. Seems this fellow got in an automobile crash, and when they stitched him back together, his hands were all gnarled up in the shape of Richard Nixon. This might not be talent so much as God-willing happenstance, to have your mangled fingers resemble the silhouette of one of the nation's finest leaders, but you can bet I saluted when I saw his face behind the curtain.

Now, if you're not old enough to vote for our president or fight in our wars, stop reading now, because what's on these next pages might make you too plum twisted to ever perform either duty worth a damn.