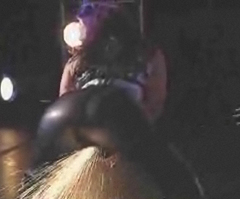 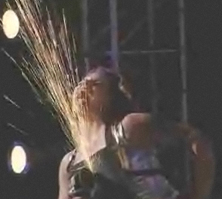 I know I'm around grown folks now, so I'm gonna start spitting chaw instead of sunflower seeds, if you get my meanin'. Look at this harlot, sporting the hottest case of gonorrhea I ever seen! Joe's just pulling your hoofs, dogies, but I'd hate to be the baby who had to nurse on her spark plugs or crawl out of her fire hole. All kiddin' aside, this kind of stunt's for your high-end whorehouse, not the prime-time family-watching hour. That's what chaps me. NBC doesn't stand for Network of Burning Crotches, and I won't stand for it, either.

I might have a bad case of the squint eye, but I know someone receiving acrobatic homosexual oral sex when I see it. Look at him spinning around all happy, like a helicopter with one of its propellers in a man's mouth. 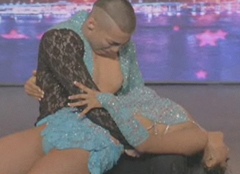 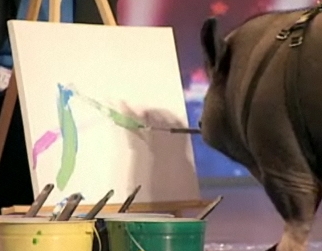 This came out of the wrong folder, the one marked "Damn Filth on the Internet." I reckon this is that Tub Girl. 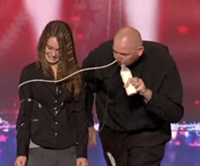 No one needs to fill in the blanks for me here. I know a deviant siphoning his own seed out through a straw planted in a woman's fertile soil when I see it. That's a potential human life he's spitting into that milk bottle.

Oh hell, it's the Indigo Girls. I wouldn't know who they were, either, but I signed a petition against them once. Look, ladies, it's sad that your career has come to this, but you know by now what happens when right-minded Americans get together and vote on you or your "causes." Give up this music pipe dream and go iron my shirt.